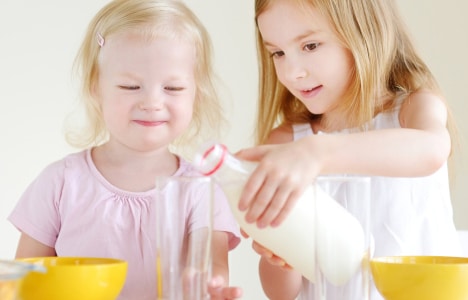 According to a recent study, the inclusion of a probiotic within milk may provide oral health benefits beyond any that are provided by consuming nonsupplemented milk. Scientists from the University of Chile in Santiago examined preschool-age children with caries. A total of 261 children were split into two study groups: The control group was given regular milk, while the other received milk enhanced with the probiotic Lactobacillus rhamnosus SP1. Each group consumed their respective milk source daily Monday through Friday over a period of 10 months.

Data were collected through clinical examination, and caries status was measured using the International Caries Detection and Assessment System. At baseline, researchers found no significant difference between the two groups. After 10 months, however, the data showed that pediatric subjects who drank regular milk experienced higher rates of caries than those in the probiotic milk group (65.8% versus 54.4%, respectively). A more pronounced difference was seen among participants who developed new cavitated lesions (24.3% for the standard milk group versus 9.7% for the probiotic group).

While more studies are warranted, the paper, “Probiotic Compared with Standard Milk for High-Caries Children: A Cluster Randomized Trial,” published the Journal of Dental Research, demonstrates that regular intake of probiotic-supplemented milk may help reduce caries risk in young children.

Nearly Half of Americans Will Delay Dental Care Due to…

New Generation of Flu Vaccine May Be Tipping Point in…