By understanding the pathogenesis of breath malodor, as well as strategies for its assessment and management, clinicians can effectively address this common condition.

By P. Mark Bartold, DDSc, PhD On Feb 1, 2016
0
Share
By understanding the pathogenesis of breath malodor, as well as strategies for its assessment and management, clinicians can effectively address this common condition.
PURCHASE COURSE
This course was published in the February 2016 issue and expires 02/28/19.

The semantic argument for use of the terms halitosis, bad breath and oral malodor is of clinical relevance because oral malodor is a restrictive term that should not be confused with odor arising from recent food ingestion, smoking, alcohol consumption, extraoral sources or psychological conditions. Oral malodor should also not be confused with morning breath malodor, as the latter arises from decreased salivary flow during sleep, and generally disappears after morning oral hygiene regimens. Oral malodor is the most common form of halitosis and is associated mainly with the presence of volatile sulfur compounds — produced by oral bacteria — that have a particularly acrid smell.1–3

Oral malodor is considered a symptom rather than the outcome of a specific pathologic process. Surprisingly, this important and often debilitating condition continues to be poorly understood, and is generally overlooked by the dental profession. Despite a large body of literature on the topic, little is known about oral malodor’s epidemiology and impact on quality of life. There are few, if any, evidence-based systematic reviews with meta-analyses on the management of oral malodor.

The incidence of chronic breath malodor is poorly understood. The incidence of halitosis ranges from 2% to 30% of the world’s population, according to a number of studies.4–7 Evidence indicates that 25% to 40% of the population of industrialized countries experience this condition.8 Nearly 90% of breath malodor cases arise from the oral cavity and are associated with poor oral hygiene, gingivitis, periodontitis, dental caries and tongue coatings.8 Of the remaining cases, sinus or gastrointestinal problems account for around 5%, with other etiologies (5%) accounting for the remainder.8 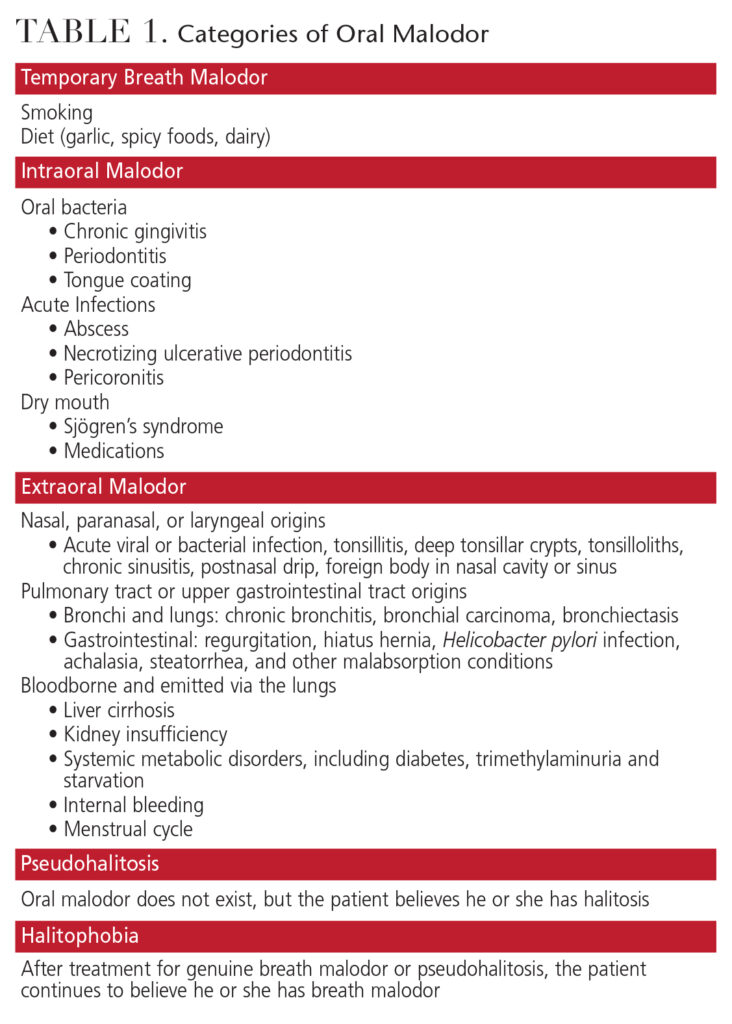 A classification for breath malodor originally described in Japan in 1999 by Miyazaki et al9 was subsequently presented in English by Yaegaki and Coil.10 This classification categorizes breath malodor as temporary, intraoral, extraoral, pseudohalitosis or halitophobia (Table 1). Such classifications support rational treatment decisions based on the overall diagnosis of the condition. Of these conditions, the most important distinction is between intraoral and extraoral breath malodor, as these represent the presence of legitimate breath malodor.

Oral malodor is caused principally by the degradation of organic material by anaerobic bacteria associated with periodontal disease.11–13 These bacteria produce the bad smell, which is composed of volatile sulfur compounds, diamines and phenyl compounds (Table 2).3,14 Of these, volatile sulfur compounds — including methylmercaptan, hydrogen sulfide and dimethyl sulfide — have been most extensively studied. Evidence suggests that oral malodor is associated with elevated levels of methylmercaptan and hydrogen sulfide, while breath malodor from nonoral sources may be associated with dimethyl sulfide.15 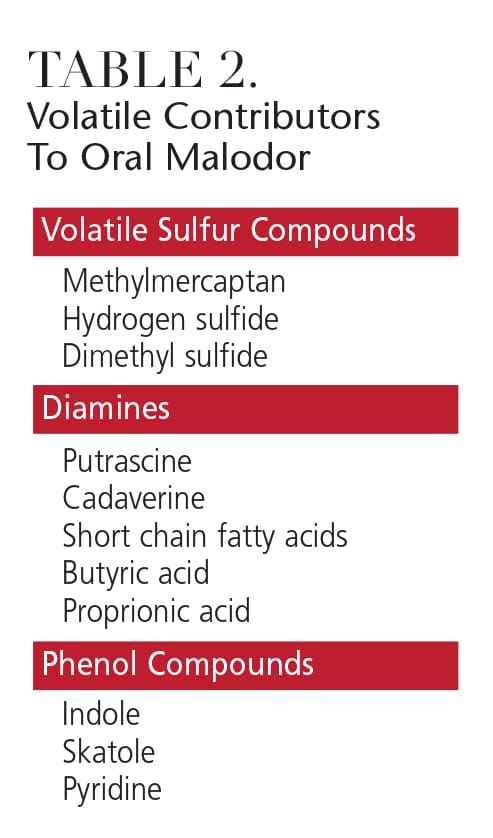 The bacteria principally res­ponsible for the production of methylmercaptan and hydrogen sulfide are associated with the subgingival biofilm present in gingivitis and periodontitis — although they are also found on the dorsum of the tongue. Some studies have suggested that, in addition to periodontal disease, oral malodor is directly related to the total bacterial load in tongue coatings and saliva.16,17

A thorough history, both medical and dental, is an essential starting point when assessing patients for breath malodor. The medical history should include questions relating to current medications, nasal and sinus conditions, snoring and sleep apnea, mouth breathing, throat infections, tonsilloliths, and an assessment of ingestion of foods that may contribute to breath malodor.

The dental history should focus on whether general dental care has been maintained through regular dental visits and oral hygiene practices, including frequency of toothbrushing and the use of other oral hygiene aids, such as floss, interdental cleaning aids, mouth­rinses and tongue cleaners/scrapers. Specific questions relating to the oral malodor must also be addressed, such as how long the problem has existed, whether it is worse at a particular time of day, and whether anyone has commented on the problem.

An assessment of the quantity and quality of saliva is also important. One consequence of reduced salivary flow and dry mouth is increased bacterial growth due to the absence or reduction of saliva’s antibacterial properties. With the increased bacterial load, there is an associated increase in the release of volatile sulfur compounds and, thus, an increase in oral malodor.

After the oral examination, a breath odor evaluation is conducted. There are numerous ways in which this can be done, including organoleptic testing (i.e., smelling patient’s breath) or the use of instruments.

While there are many methods for assessing breath malodor, instrument analysis for the presence of volatile sulfur compounds is recommended because it provides a degree of objective assessment.20,21 A variety of devices is available, but one is able to distinguish the three major volatile sulfur compounds (hydrogen sulfide, methylmercaptan and dimethyl sulfide) associated with halitosis. Sample collection is achieved by placing a disposable syringe in the mouth with the lips sealed for 30 seconds, with the contents then injected into a chromatograph. Analysis takes eight minutes, after which the resulting printout depicts the levels of the three volatile sulfur compounds. This provides immediate assessment of whether the source of the oral malodor is likely due to the oral cavity or elsewhere.

The treatment options for breath malodor can be divided into six categories (Table 3).10,18 Temporary, intraoral and pseudohalitosis can be managed by oral health care professionals — however, extraoral halitosis and halitophobia will require the assistance of physicians, psychiatrists and/or psychologists. 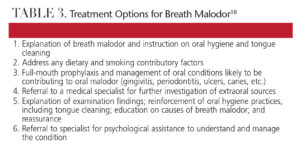 Oral malodor is suspected if elevated levels of hydrogen sulfide and methylmercaptan are present. Conversely, an extraoral source of breath malodor is likely if dimethyl sulfide readings are high.15 Once a diagnosis of oral malodor (as distinct from breath malodor) is made, treatment of the oral condition can commence. Ideally, this will be cause-related and involve a multistep approach. If temporary breath malodor is suspected, assessment and management of dietary components are essential to eliminate the intake of strong-smelling foods and drinks, such as garlic, onions and alcohol. This initial aspect of management should be followed for all five breath malodor classifications. In addition, all dental diseases — including gingivitis, periodontitis, ulcers and dental caries — must be diagnosed and effectively managed.

The overriding principle for management of intraoral breath malodor is reducing the bacterial burden. An effective and regular oral hygiene regimen (brushing and interdental cleaning) must be implemented, and should include twice-daily tongue cleaning.20,22,23 Due to the potential damage to the tongue surface, some clinicians do not recommend tongue scraping and prefer gentle brushing with a small, soft-bristle brush.10 Use of a proven antibacterial toothpaste is recommended.

Rendering malodorous gases nonvolatile should also be an aim when managing oral malodor and can be achieved through several means. Increasing salivary flow boosts the solubility of volatile sulfur compounds and can help lessen noticeable effects of malodor. Drinking water frequently can reduce malodor for an hour. Beyond these approaches, the adjunctive use of antiseptic mouthrinses is essential to ensure a satisfactory outcome in the management of oral malodor.24,25

While chlorhexidine remains the gold standard for chemical plaque control, it is best used only in the short term for treating oral malodor. Emerging evidence suggests that formulations with cetylpyridinium chloride, zinc ions or essential oils may be helpful.19,26–28 These formulations work by reducing the overall bacterial load and also have a dilution effect on the malodor. The addition of zinc is particularly interesting because it appears to have both an antibacterial effect and the ability to neutralize volatile sulfur compounds.29 Thus, mouthrinses and toothpastes containing zinc are emerging as helpful tools in managing oral malodor.

Probiotics have been proposed as adjuncts in the management of both intraoral and extraoral breath malodor.30 The use of probiotics for oral malodor is based on the bacterial origin of this condition.31 Consequently, controlling the reappearance of odiferous bacteria following conventional mechanical cleaning by the introduction of nonodiferous, commensal bacteria to colonize the oral cavity is an attractive proposal.31 To date, studies investigating the use of probiotics as an adjunctive aid for management of oral malodor have been equivocal and are not universally accepted as a method to control oral malodor.32,33

The use of agents that merely mask the offensive smell of oral malodor is generally of limited value. These agents include mouthrinses, sprays, lozenges and chewing gum. While these will most likely have short-term effects, they are not a definitive treatment and may delay an accurate diagnosis.

An extraoral source of breath malodor is usually suspected if dimethyl sulfide readings are high.15 In these cases, additional assessment and tests are required. If deemed appropriate, referral to a physician specializing in management of nasal, throat or gastrointestinal abnormalities may be necessary. These may also be accompanied by blood tests for kidney insufficiency, liver insufficiency/dysfunction, and metabolic diseases.

Recognize the Signs Of Domestic Violence