The numbers are frightening. And what were once whispered concerns have escalated to a roar over the epidemic of prescription opioid abuse.

The numbers are frightening. And what were once whispered concerns have escalated to a roar over the epidemic of prescription opioid abuse. Each day, more than 50 Americans die from prescription painkillers.1 Since 1999, opioid prescriptions have quadrupled, according to the U.S. Centers for Disease Control and Prevention (CDC).2 Not surprisingly, there has been a corresponding increase in overdose deaths. The CDC’s Morbidity and Mortality Weekly Report notes that between 2000 and 2014, nearly half a million Americans died from drug abuse, with opioids singled out as the biggest threat in what it calls the “drug overdose epidemic.”3 Just as alarming, it cites a 137% increase in overdose fatalities since 2000 — including a 200% jump in deaths from opioid misuse.3

In a trend that dental professionals can help reverse, opioid fatalities hit record levels in 2014.4 Of the 47,055 deaths attributed to drug overdose, 61% involved opioids.3 Across all opioids (including heroin and fentanyl), this represents a 14% increase from 2013 — including a 9% spike in deaths from prescription painkiller abuse.3

Published by the U.S. Department of Health and Human Services, the 2014 National Survey on Drug Use and Health reports that two-thirds of nonmedical users of psychotherapeutic drugs misused prescription opioids. In addition, the survey notes that 1.9 million Americans meet the criteria for pain reliever use disorder.5

As a profession, dentists are stepping up efforts to stop the abuse. A study in the American Journal of Preventive Medicine reports that between 2007 and 2012, dentists cut back on opioid prescriptions by 5.7%.6 But more needs to be done to fight the epidemic, and dental professionals are increasingly aware of the key role they have to play.

Earlier this year, the CDC issued new prescription recommendations aimed at improving safety and mitigating opioid abuse. It encourages the use of nonopioid medications, as well as nonpharmacologic therapies for pain management.7 Besides rethinking their prescription practices, dentists can help by providing patient education concerning proper use and securing of prescription medications, and by screening for substance use disorders and offering referrals, as appropriate.8

Like any problem of this magnitude, the battle won’t be won overnight. It will take each dental professional, working one day at a time, to rethink his or her approach to therapy, elect the most minimally invasive procedures possible, and manage pain in a fashion that’s consistent with the patient’s best interests — and the profession’s commitment to end prescription opioid abuse.

Applications and Limitations of Periodontal Endoscopy 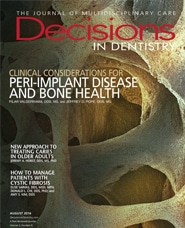