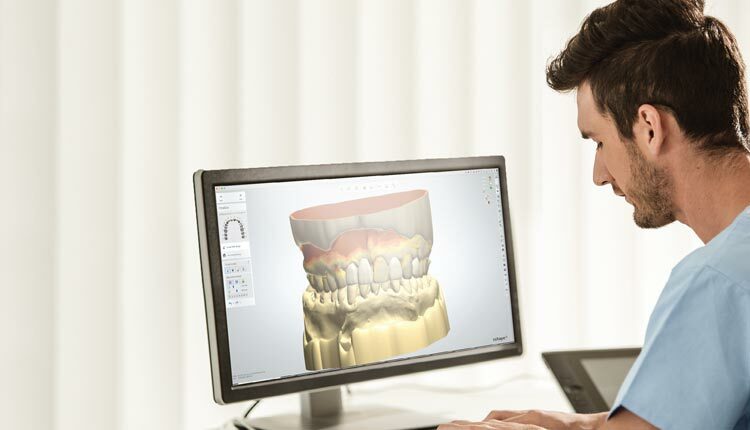 Interim removable partial dentures (RPDs) are a valuable cosmetic stopgap for partially dentulous patients in need of definitive prosthodontic care.1 For patients requiring extraction of teeth in the esthetic zone, RPDs can be fabricated for immediate placement so missing teeth are not evident following surgery and during healing.2 With the advent of digital technology, the fabrication of an interim RPD can be completed in one visit using scanning, with the delay necessary for traditional processing of denture resin eliminated through the use of three-dimensional (3D) printing.3–6 The most common 3D printing technology in dental applications is stereolithography — a process in which a concentrated ultraviolet laser light beam moves rapidly across the print area of liquid photopolymerizing resin, light curing the eventual prosthesis.

The purpose of this clinical report is to illustrate the potential use of digital technology in fabricating an immediate interim RPD in a patient requiring multiple extractions in the esthetic zone.

A 45-year-old male pre­sented to the vertically inte­grated student clinic at the University of Michigan School of Dentistry with a chief complaint of a “sharp, throb­bing pain in my front teeth.” The patient had received no dental care for at least five years and had no medical con­ditions that would contraindicate dental treatment, but gave a history of past drug abuse and current tobacco smoking. After a clinical and radiographic examination, the right maxillary lateral incisor (tooth #7), left maxillary lateral incisor (#10), and the left maxillary first premolar (#12) were determined to be non-restorable due to caries (Figure 1). The right maxillary central incisor (#8) had long been missing due to trauma.

The patient consented to extraction of the symptomatic non-restorable teeth and requested immediate replacement of the extracted teeth and tooth #8. Due to instability of his remaining maxillary teeth stemming from caries and periodontal disease, it was agreed that extracted teeth would be cosmetically replaced with an immediate interim RPD until the patient could return for definitive prosthodontic treatment. The patient was advised that a tissue-borne interim RPD is only intended for cosmetic replacement of missing teeth and would not function as effectively as a definitive prosthesis.

Impressions of the maxillary and man­dibular arches were made with alginate and casts fabricated of Type 3 dental stone. The area of the casts where teeth would be removed were carved to the anticipated shape of the edentulous ridges, and the casts were scanned with an intraoral scanner. Next the casts were mounted on a semi-adjustable articulator.

The immediate interim partial denture was designed using specialized software and fabricated prior to the extractions (Figures 2A and 2B). The software generated the interim denture design in separate parts for the base and teeth, so it was necessary to connect the parts for 3D printing using 3D modeling software.

The interim partial denture was 3D printed using a resin-based denture material in shade A1. After printing, the prosthesis was washed in isopropyl alcohol for 20 minutes, then cured an additional 15 minutes in a light chamber. The support framework was removed (Figure 3), and the fit of the interim RPD was verified on the maxillary diagnostic cast, with maximum intercuspation and laterotrusive occlusion adjusted on the mounted casts (Figure 4). As much as possible, laterotrusive function was directed toward the patient’s remaining natural maxillary anterior teeth. Once impressions had been made, total time for RPD fabrication was just under three hours and was completed the same day prior to the patient’s surgical appointment.

At the surgical visit, teeth #7, 10 and 12 were atraumatically extracted (Figure 5), and minor adjustments were made to facilitate stability of the prosthesis (Figures 6A and 6B) following conventional denture placement. The patient returned to the clinic after one week for follow-up, at which point it was verified the soft tissue was healing adequately and was well-adapted to the intaglio surfaces of the denture base at the extraction sites (Figure 7). He was rescheduled to begin comprehensive dental care.

Digital techniques — including 3D printing — are a viable alternative to conventional denture fabrication methods. They can be done efficiently (often requiring fewer visits), and offer improved control over prosthesis design since commercial laboratory involvement can be reduced or eliminated. An additional advantage of this approach is the capability of reprinting a lost or failed prosthesis. The authors also consider the printed RPD presented to be less liable to fracture than a conventional, all-acrylic RPD because the denture base and replacement teeth are monolithic.

A disadvantage of the technique presented here would be that the prosthesis is monochromatic, with a tooth-colored denture base that would need to be colored pink (at least in part) to match the gingiva should a facial flange be necessary in the interim RPD. The authors concede that intraoral scanning and use of a virtual or 3D printed cast could potentially hasten the fabrication of this interim RPD, but chose conventional casts believing that time would be saved at the surgical appointment owing to less need for adjustment of the prosthesis, and that hand carving would more accurately represent the anticipated residual ridge in the extraction sites. The authors also concede there is considerable equipment cost for scanning, design and 3D printing hardware and software, which must be available before this type of service can be contemplated.

The utilization of computer aided design/computer aided manufacturing and 3D printing technology already present in the clinic effectively allowed immediate cosmetic replacement of visible anterior teeth for this patient on the date of extraction, without the involvement of a commercial laboratory.

Digital technologies for impression making, treatment planning, design and fabrication using either in-office milling or three-dimensional (3D) printing are rapidly transforming dental practices from conventional workflows to partial or complete digital workflows. The use of a partial digital workflow for in-office fabrication of an interim partial denture was shown to reduce treatment time and improve the patient’s experience. Another significant advantage of the digital approach is the ability to refabricate the interim partial denture utilizing the stored data, without the need of an additional impression.

The in-office fabrication of a milled or 3D-printed interim partial denture begins with data acquisition using an intraoral scanner or by scanning traditional impressions or casts. After scanning, patient data is imported into specialized software that allows the planning and design of the interim partial denture. The next step involves fabrication of the prosthesis. Although the patient in this case report was treated with a 3D printed “same day” denture, in-office milling provides an alternative approach to care. While a variety of suitable materials could be used for milling interim partials, clinicians are advised to consider possible limitations of the available equipment, as these may influence the fabrication method ultimately chosen (e.g., in-office milling, laboratory milling, or 3D printing). In the case presented here, the authors considered milling the interim removable partial denture, but ruled out this approach due to the need for a machine able to handle such a large milling blank, and because of the wish to avoid delays associated with sending the design out for lab fabrication.

Depending on the specific case (i.e., planned prosthesis) and in-office equipment available, operators may ultimately choose the fabrication method that best serves all clinical parameters, including treatment expediency. 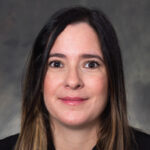 Daler E. Tarrazzi, DDS, MS, is an assistant professor in the Department of Restorative Sciences at the Dental College of Georgia at Augusta University. She can be reached at [email protected]. 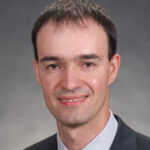 Gustavo Mendonca, DDS, MS, PhD, is a clinical professor in the Department of Biologic and Materials Sciences and Prosthodontics at the University of Michigan School of Dentistry in Ann Arbor.

Intraoral Scanning in the Creation and Application of Duplicate Dentures 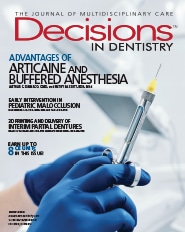