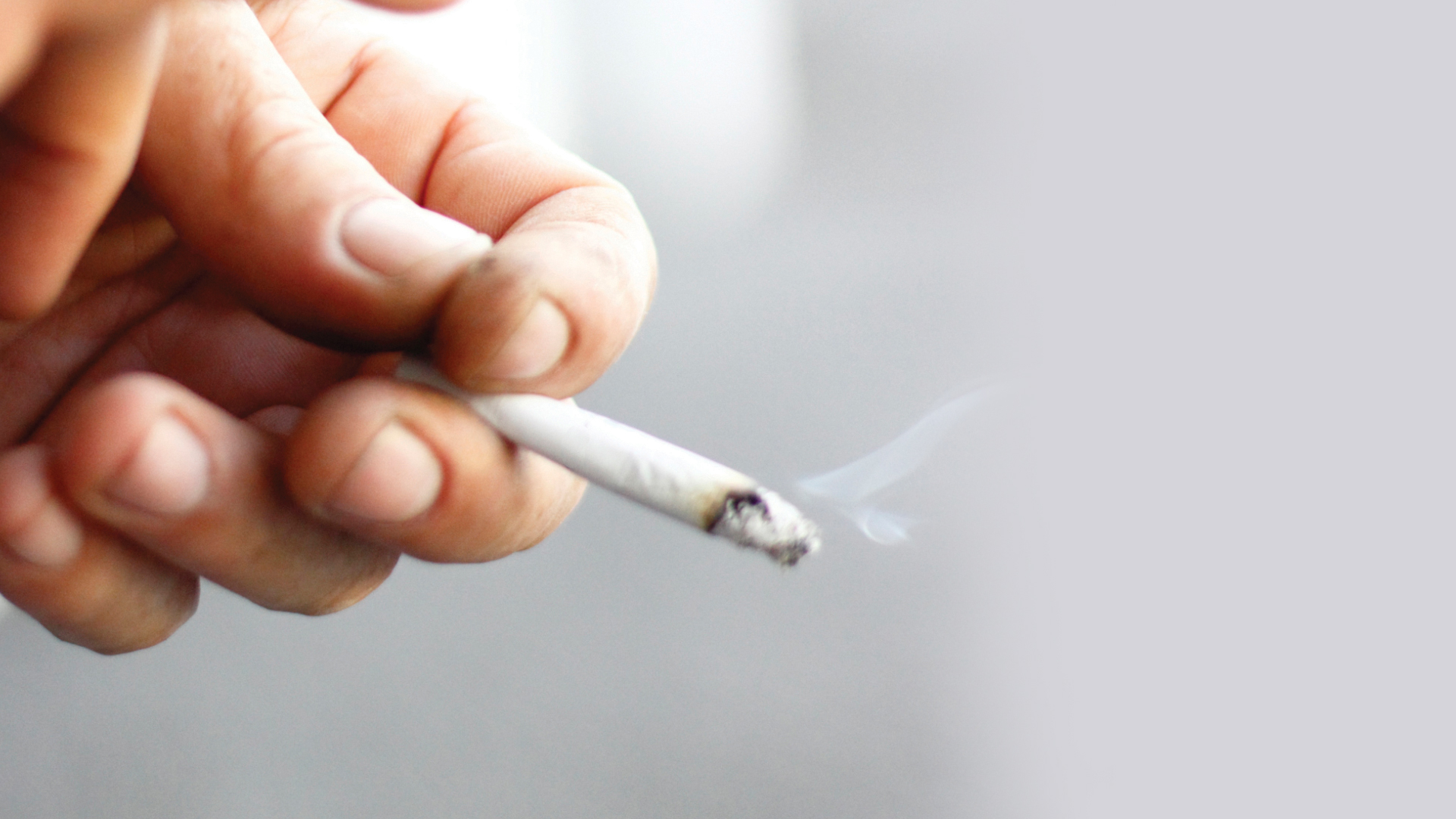 Oral Effects of Tobacco and Marijuana Use

What the evidence says about the links between tobacco, marijuana and dental caries.

By Marcia M. Ditmyer, PhD, MCHES, Christina A. Demopoulos, DDS, MPH and Connie Mobley, PhD, RD On Oct 6, 2015
1
Share
What the evidence says about the links between tobacco,
marijuana and dental caries.
PURCHASE COURSE
This course was published in the September/October 2015 issue and expires 10/31/18.

Dental caries is a widespread but preventable chronic oral health problem that affects people of all ages, races and ethnicities. In the United States, approximately 20% of young people age 12 to 19 have untreated decay, while 60% of low-income adolescents in the same age group have experienced dental caries. Among adults age 20 to 64, 20% have untreated decay.1 Although much progress has been made in developing and implementing strategies to address tooth decay and assess caries risk, the role of tobacco and marijuana use in the incidence of dental caries has not been closely examined. In order to better comprehend the oral health implications of tobacco and/or marijuana use, it is important to understand the trends in these behaviors.

Tobacco use remains one of the leading preventable causes of death in the United States. It is responsible for approximately one out of every five deaths, and from 2000 to 2004, cigarettes killed approximately 443,000 Americans annually.2,3 Cigarette consumption in the U.S. increased from 2.5 billion in the 1900s to more than 360 billion in 2007.4,5 Cigarette use takes years off an individual’s life and adds to the costs of health care.3 Tobacco use causes preventable diseases and contributes to poor oral health.

Cigarette smoking among middle school and high school students peaked in the mid-1990s, and, by 2004, the prevalence of 30-day use declined by 56% in 8th graders, 47% in 10th graders, and 32% in 12th graders.6,7 Later, reported increases in tobacco use among high school students were recorded, with 17.2% of adolescents admitting tobacco use in 2009 and 19.5% in 2011.7 Cigarette smoking during adolescence can produce significant health problems in adulthood, including severe respiratory illnesses, decreased physical fitness and diminished lung function. In 2010, almost 1.4 million people under the age of 18 reported they smoked cigarettes for the first time within the past 12 months.8 More than one-third of all adolescents who tried cigarettes became daily smokers before leaving high school, with nearly 90% of adults reporting they began at or before the age of 18.3 Because smoking as a child or adolescent is likely to lead to smoking as an adult, it is important to promote prevention plans early to help reduce initiation and increase cessation efforts. 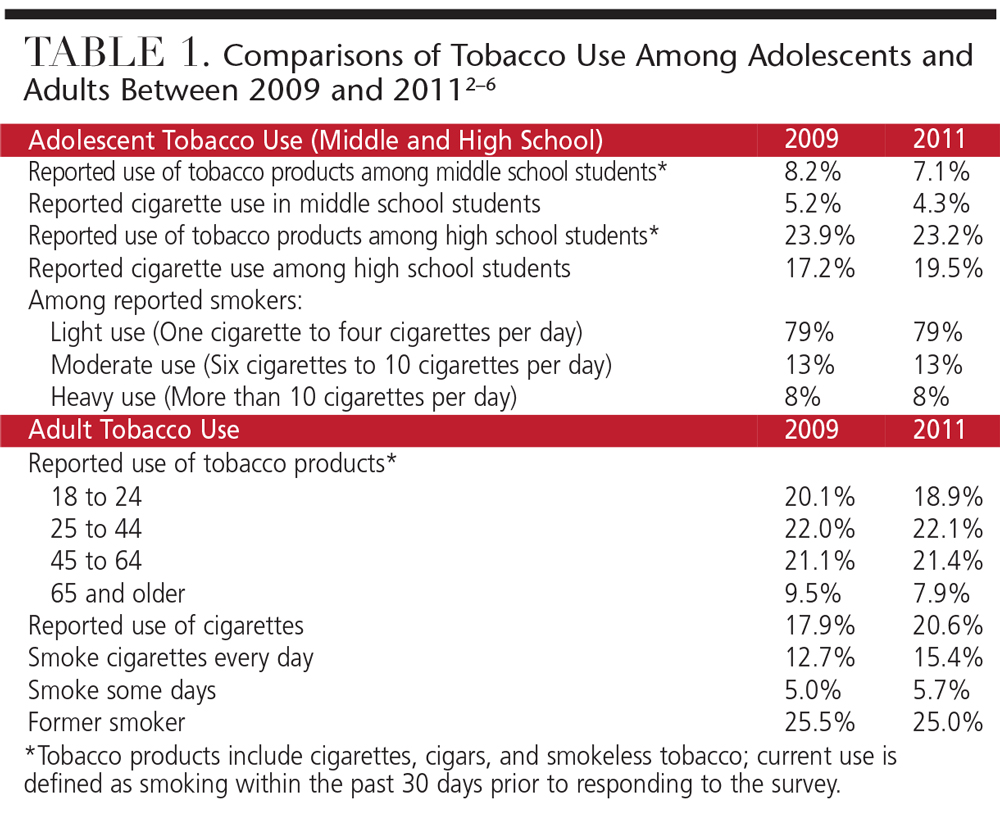 Data from 2011 show a decline in smoking from 11.7% to 10.6%,9 and while this is only 1 percentage point, it could translate into the prevention of thousands of premature deaths. As of 2012, 19.5% of 12th graders reported cigarette smoking behaviors, while 20.6% of adults reported they were cigarette users.7 Since the early 1990s, light cigarette smoking (one to four cigarettes per day) among adolescents has increased, especially among women and white non-Hispanic men and women.7 Heavy use of cigarettes (more than 10 cigarettes daily) has declined overall from 18% in the early 1990s to 7.8% in 2011. Among Hispanic adolescents, however, heavy use has increased from 3.1% to 6.4% in the same period.

It is important to note that the levels of light, moderate and heavy cigarette use have not decreased since 2009. Among adults, more than 15% reported smoking cigarettes every day. Approximately 8% of adolescents and 15.4% of adults were heavy smokers.7 Table 1 details some comparisons on tobacco use and cigarette smoking rates between 2009 and 2011 in adolescents and adults.2–6

TRENDS IN MARIJUANA USE

While there is no empirical evidence linking marijuana use to increased mortality, it is not a benign substance.8 Marijuana users are exposed to a greater concentration of carcinogens than tobacco users.6,8 The main health concerns associated with marijuana use are related to smoking it, rather than secondhand exposure or oral consumption. It is difficult to separate the results of cannabinoid use, however, from the effects of inhaling smoke from burning plant material and contaminants.6

The actual risks associated with using marijuana are not definitive. The literature has divided associations into acute risks and chronic risks. Acute risks are associated more with psychomotor performance, thus, they fall into morbidity and mortality statistics linked to accidents.6,8 The chronic risks are of greater concern. These have been linked to the effects of smoking that include exposure to an active ingredient in marijuana, tetrahydrocannabinol.6 Similar to tobacco smoke, marijuana smoke is associated with increased risk of cancer, lung damage and oral health diseases, such as oral cancers, periodontitis and dental caries.6 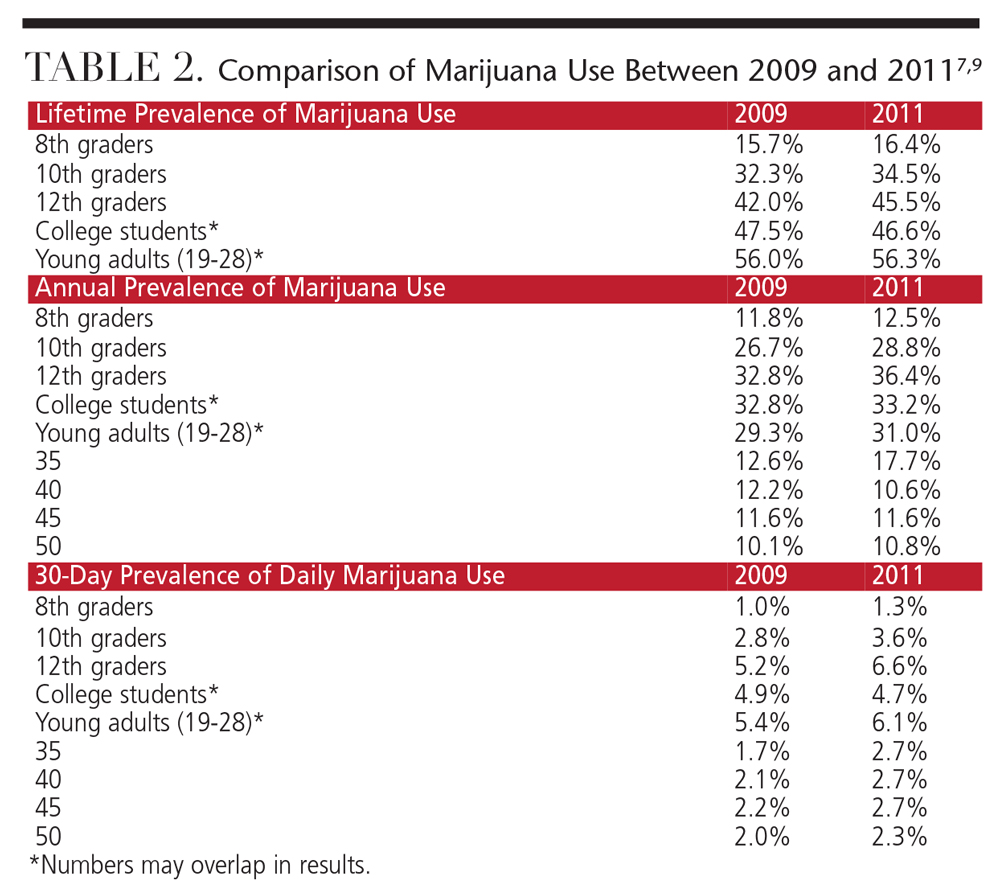 Similar to tobacco trends among adolescents, marijuana use peaked in the mid-1990s; unfortunately, daily marijuana use by adolescents increased significantly in 2010.7,10 There was a decline in all use until 2009, when the rates of marijuana use in all age groups increased. According to the 2011 National Survey on Drug Use and Health, 16.7 million people age 12 or older reported using marijuana within the 30 days prior to taking the survey.11 Although the user rates today are low relative to marijuana’s heyday in the late 1970s, the 6.6% prevalence seen in 12th graders is the highest observed in some 30 years.

Historically, as perception of risks associated with a particular behavior go down, consumption rates increase (and vice versa). Today, young people are showing decreased perception that marijuana is dangerous.9 The growing idea that marijuana is a safe drug may also be reflected in the recent public discussions over medical marijuana and marijuana legalization.7,9,10,11 Table 2 outlines some of the prevalence rates of marijuana use between 2009 and 2011 in middle school, high school and adult users.7,9

DENTAL CARIES ASSOCIATED WITH TOBACCO AND MARIJUANA USE

Studies have found associations between numerous factors and dental caries, supporting the idea that it is a multifaceted disease altered by genetics, behavior and environment.12,13 Unfortunately, there have been very few studies that controlled for potential confounding factors, such as tobacco/marijuana use associated with caries. The potential impact of tobacco and marijuana use should be addressed to determine the actual effect on oral health — specifically pertaining to dental caries — on those who use tobacco and/or marijuana and those who do not.14,15

Table 3 summarizes the published literature that targets associations between oral health/dental caries and tobacco use and/or marijuana use.16–19 Only one prospective study compared three cohorts with varying ranges of marijuana use across several years. (This study also controlled for tobacco use and other confounding factors.) The investigators found a strong association between regular exposure to marijuana with the increased prevalence and incidence of periodontal attachment loss by age 32.20

Another study reported that almost half of the adolescents surveyed indicated they used more than one type of tobacco product simultaneously with marijuana.15 While there were lower prevalence rates across all eight years of the study, the trend line of tobacco use and marijuana use was similar, suggesting there may be a synergistic effect between the two.12 The findings in this study documented an increased prevalence and severity of caries among adolescents who used tobacco (in any form) or marijuana across all eight years.15 Decayed, missing and filled indices and prevalence of untreated tooth decay were significantly higher among those who reported using tobacco and marijuana products, compared to nonusers. Further, the effects of cigarette and marijuana use combined have an even larger effect on untreated tooth decay.

Patients who use tobacco and/or marijuana are at greater risk of dental caries and other oral health-related disease than nonusers as early as adolescence and young adulthood. There are important implications in treating tobacco/marijuana users who may have poor oral and periodontal health. It has also been suggested that the frequent use of marijuana may triple the risk of severe periodontal disease.21 Tobacco and/or marijuana use will often produce stains (greenish-gold in appearance) and xerostomia, which is associated with an increased risk of dental caries and breath malodor.15,20 Consistent marijuana use can create chronic inflammation of the oral epithelium and leukoplakia, increase the risk of periodontal diseases and delay wound healing.20

There is some thought that those who use marijuana snack more often than nonusers, leading to an increase in caries risk. In fact, researchers have found no significant differences in the frequency of consumption of high-sugar snacks among those who use and those who do not use marijuana.22 Based on these results, it is difficult to ascertain whether the rise in caries incidence is due to the increased intake of sugary substances. 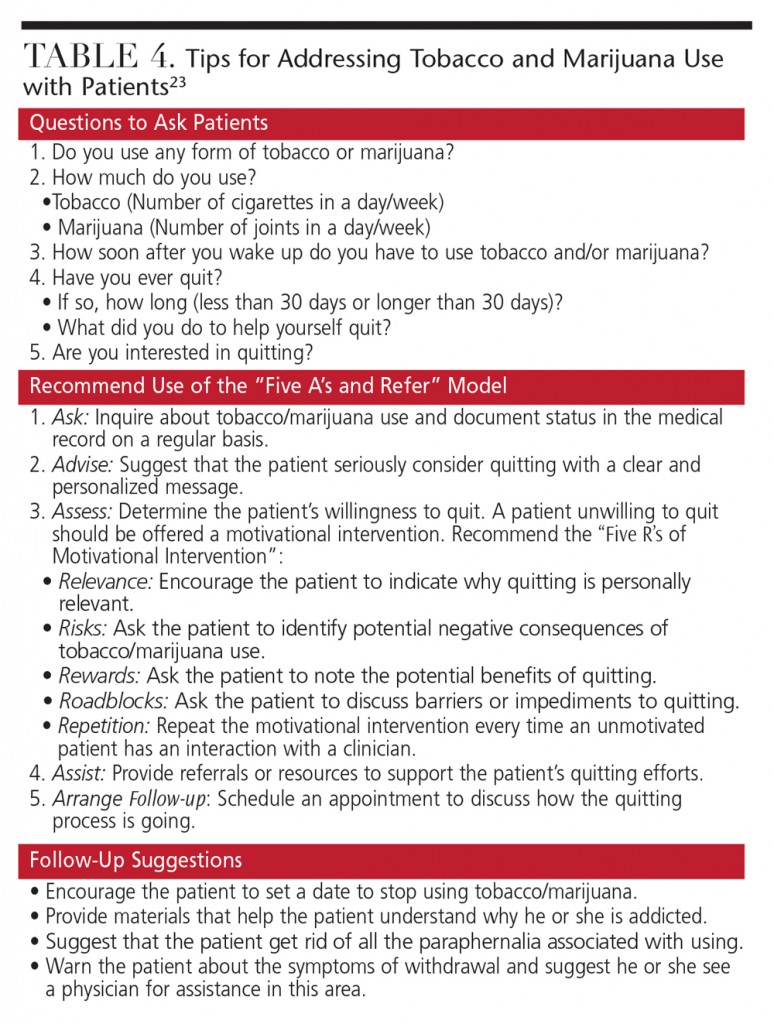 The prevalence of tobacco and marijuana use necessitates that oral health professionals remain aware of the adverse effects of their abuse. The consumption patterns of chronic tobacco and/or marijuana users should be part of their medical history. By remaining up-to-date on trends of tobacco/marijuana use, dentists will be better able to detect early clinical signs of unhealthy lifestyles.

Researchers have found that adolescents’ and young adults’ attitudes about the risks of marijuana are softening.9 The highly charged debate over legalization likely fuels this fire. Oral health professionals should caution adolescents about the harmful effects of marijuana. Because young people appear neither to understand nor fear the consequences of tobacco and/or marijuana use (especially when used in combination), the ability to change their behaviors can be challenging. If a dentist sees an adolescent or young adult with higher than normal rates of caries and/or more severe gingivitis, they will want to assess the patient’s tobacco/marijuana-use habits. Table 4 provides dentists with five basic questions that will help assess these behaviors.23

Oral health status and risk of oral diseases, such as caries, have been associated with tobacco and/or marijuana use among adolescents and young adults.15–23 The dental professional is a gatekeeper who assesses risk and implements strategies to prevent and/or change tobacco/marijuana use in these high-risk groups. Taking medical histories that assess the social behaviors of patients, and implementing intervention strategies as appropriate for those who report a positive history of tobacco and/or marijuana use, will not only improve patients’ oral health literacy, but oral health outcomes as well.

Christina A. Demopoulos, DDS, MPH, is a faculty member at the University of Nevada Las Vegas (UNLV) School of Dental Medicine. A diplomate of the American Board of Dental Public Health, she provides dental public health expertise at the local, state and national levels. Demopoulos is a course director for several classes at the UNLV School of Dental Medicine and educates students about the human papillomavirus and oropharyngeal cancer.

Connie Mobley, PhD, RD, is a professor and associate dean of research at UNLV School of Dental Medicine and a registered dietitian. 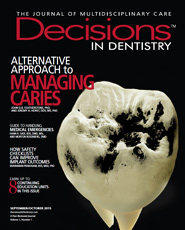