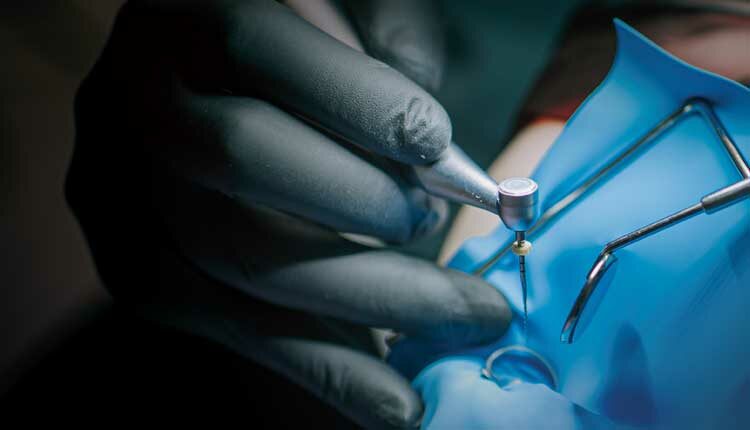 This case study details a seven-year follow-up of a patient treated for a Heithersay Class 4 lesion.

Resorption of the permanent teeth is considered pathologic, and, if left untreated, can result in extensive destruction of tooth structure, potentially leading to extraction.1 Pathologic root resorption is classified by its location. Internal resorption arises from within the root canal system, and the tissue responsible for the resorption is the pulp tissue itself. Therefore, removing the pulp tissue by conventional root canal treatment arrests the resorptive process.2 External resorption arises on the external root surface, and can be further classified as transient surface resorption, replacement resorption (ankylosis), inflammatory resorption, or invasive cervical resorption (ICR). The latter is also known as external cervical resorption, and the terms are used interchangeably in the dental literature.3

Potential areas where the initiation of pathologic resorption may occur include sites that have a break in the cementum, precementum, or predentin layers. A break in the cementum allows for clastic cells to have direct access to exposed dentin. This loss of cementum can result from trauma, scaling and root planing, or from a congenital gap between the cementum and enamel.4 Because clastic cells will only resorb mineralized tissue, the unmineralized precementum and unmineralized predentin create a protective layer, thereby preventing resorption.5 Further evidence has shown that inflammation must also be present at the resorption site for the resorption process to continue.6,7

The prevalence of ICR is relatively uncommon, and the incidence in the general population ranges from 0.02% to 0.08%.3,8 Most reports indicate that ICR involves a single tooth; however, there are several case reports of individuals who possess three or more affected teeth — which has been termed multiple cervical resorption.9

This form of invasive resorption usually initiates on the cervical aspect of the root between the epithelial attachment and bony crest.1 Once the resorbing tissue invades the dentin, ICR progresses centrally toward the pulp, as well as in a coronal-apical direction.10 The condition occurs most often in individuals 35 to 60 years of age, with an equal distribution between males and females.3

Although the precise etiology of ICR remains unknown,1 predisposing factors are frequently associated with these lesions. One such predisposing factor is orthodontic treatment, which is reported in up to 46% of cases. Other factors include trauma (29%), parafunctional habits (23%), poor oral health (23%), malocclusion (18%), and extraction of a neighboring tooth (14%).5 Interestingly, a potential link has been found between ICR and feline herpes virus type 1.11 Overall, 60% of ICR cases have more than one predisposing factors, which indicates the etiology of ICR is most likely multifactorial.5

In 1999, Heithersay8 developed a four-point classification system based on the observation that ICR lesions extend coronally in early lesions, and apically in advanced lesions. On a traditional periapical radiograph, Class 1 lesions are small and shallow. Class 2 lesions extend close to the pulp space, but have not yet invaded the root dentin. Class 3 lesions extend into the root dentin, but are contained in the coronal third. Class 4 lesions are large and extend beyond the coronal third of the root.8

Treatment options for ICR include nonsurgical therapy, surgical treatment, or a combination of both.13 The option for immediate extraction — with or without replacement of the tooth — may also be considered. Because ICR lesions tend to be asymptomatic, the option of no treatment might be appropriate for teeth with advanced ICR lesions and a poor prognosis. The clinician and patient should plan for the loss of these types of teeth.

Nonsurgical and surgical treatment of ICR both involve the mechanical removal of the resorbing tissue and application of 90% trichloroacetic acid (TCA). However, when nonsurgical treatment is performed, the canal should also be medicated with calcium hydroxide.13,14 The decision to treat surgically or nonsurgically is largely dependent on whether the lesion is in an accessible location, and whether surgical treatment would require removing a large quantity of bone, which would jeopardize adjacent teeth. If the root canal system is involved, root canal treatment should be performed.13 Once the resorptive tissue has been removed, the resorptive defect should be restored with either a resin-modified glass ionomer (RMGI) material,15 bioceramic material,3 or composite resin.16

A 63-year-old male presented for a periodontal maintenance appointment with a chief complaint of mild palpation sensitivity on tooth #6. The patient was otherwise asymptomatic. A review of the patient’s medical history revealed no significant findings. He reported taking no medications and had no known allergies. Visual examination of the area revealed an abfraction and ICR lesion on the facial aspect of tooth #6. A periapical radiograph was made, which confirmed the presence of an ICR Heithersay Class 4 lesion (Figures 1A through 1C). The patient was referred to the University of the Pacific School of Dentistry’s graduate program in endodontology for evaluation and treatment.

Pulp vitality assessment was performed, and teeth #5 through 11 all responded normally to percussion and cold testing. The gingival tissue appeared normal and uninflamed, and there were no pockets deeper than 4 mm. A CBCT volume was acquired, which revealed ICR involvement into the pulp, as well as more than half of the tooth structure in the buccal-lingual direction, and apically into the middle third of the root (Figure 2). A diagnosis of asymptomatic irreversible pulpitis with normal apical tissues was made. The patient was informed of the resorption and guarded prognosis. Risks, benefits, and alternative treatments were discussed. The patient opted to pursue therapy that included surgical access, root canal treatment, and restoration of the ICR lesion.

Surgical access was performed to allow direct access to the lesion. The resorptive tissue was removed with a round bur and treated with 90% TCA on a cotton pellet. Hemostasis was achieved by pressure with a cotton pellet impregnated with ferrous sulfate.

Under rubber dam isolation, conventional lingual endodontic access was accomplished on tooth #6, and a pulpectomy was performed using hand and rotary instruments. Calcium hydroxide was placed in the apical portion of the canal. A gutta-percha cone was placed in the coronal aspect of the canal to act as a matrix and preserve a path for future completion of root canal treatment (Figure 3). The endodontic access opening was sealed with a temporary restorative material, and the facial ICR defect was restored using RMGI (Figure 4).

The patient was asymptomatic when he returned four weeks later for completion of root canal treatment. The patient was anesthetized, and a rubber dam was placed. Access was reestablished and the gutta-percha was removed using chloroform and endodontic files, which allowed access to the apical portion of the canal (Figure 5). The canal was cleaned and shaped with a #25 0.07 nickel-titanium rotary file, using 8.25% sodium hypochlorite as an irrigant. The canal was dried and obturated with gutta-percha and root canal sealer using a warm vertical condensation technique (Figure 6). The gutta-percha was down-packed 2 mm apical to the ICR defect. A size 1 fiber post was fitted and cemented, and the access opening was sealed with composite resin (Figure 7).

A periapical radiograph at the six-year follow-up revealed an open margin located at the gingival aspect of the mesial-buccal surface of the RMGI (Figures 9A and 9B). The patient was asymptomatic. A CBCT volume was acquired, which showed neither further resorption nor any endodontic pathology. Following surgical access, the defect was treated with silver diamine fluoride (SDF) and repaired with an RMGI restorative material.

A seven-year follow-up CBCT volume was acquired, which showed neither further resorption nor any endodontic pathology (Figures 10A through 10D). Additionally, a periapical radiograph revealed no significant findings. The root showed dark, hard staining from previous SDF application (Figures 11A and 11B). The patient remained asymptomatic.

Diagnostic Imaging Considerations — Cone beam imaging was utilized to allow for visualization of the exact size and location of the ICR lesion, as periapical radiographs pose clinical disadvantages, which include being two-dimensional and underestimating the extent of the lesion.17 Additional benefits of using CBCT include showing the ICR portal(s) of entry, proximity of the resorptive lesion to the pulp, and proximity of the lesion to the overlying structures.18 The use of CBCT scanning can also detect smaller lesions,19 which allows for earlier treatment and better success rates.8

Management Considerations — To arrest the resorption process, the causative tissue must be removed. This requires surgical access to the lesion to allow direct access, and so the resorbing granulomatous tissue can be mechanically removed with a slow-speed round bur. Physical removal of the resorbing tissue may also be performed with a sharp spoon excavator or an ultrasonic device.20,21

Following mechanical debridement, the defect was chemically treated with the chelating agent 90% TCA, which causes coagulative necrosis of any remaining resorptive tissue without harming the periodontium.21,22 During chemical debridement with TCA, care must be taken to avoid contact with the oral mucosa because inadvertent contact can result in a chemical burn.3 Calcium hydroxide was placed as an intracanal medicament because it possesses a high pH, which has been shown to inhibit dentinoclasts, eliminate bacteria and neutralize lipopolysaccharide (endotoxin), which is a potent inflammatory mediator found in the outer cell membrane of gram-negative bacteria.7

Restorative Considerations — An RMGI material was chosen to restore the resorptive defect due to its ability to chemically bond to dentin, as well as its ability to be placed subgingivally.23 The use of RMGI has also been shown to reduce the expression of dentin matrix metalloproteinase-8, which may help prevent future resorption. More recently, bioceramic materials, such as mineral trioxide aggregate or calcium silicate-based dentin replacement agents, have been recommended for the restoration of ICR lesions due to their sealing ability and biocompatibility.20 Heithersay Class 3 and Class 4 lesions exhibit a substantial loss of dentin, which is replaced by the RMGI restorative material. The restorative dentist must avoid crown preparation on teeth with ICR class 3 or 4 lesions because the 1- to 1.5-mm axial wall reduction removes even more solid tooth structure, and the volume of supportive dentin is reduced by 30% to 40%. The crown preparation removes a substantial volume of dentin in the immediate vicinity of the ICR defect, and this loss of dentin in the root weakens the tooth (Figure 12).

Periodontal Considerations — External management of cervical root resorption generally involves placing a biocompatible subgingival restoration — and, in this effort, clinicians should avoid violating the supracrestal attachment (biologic width). This may require crown lengthening surgery or orthodontic extrusion to expose adequate tooth structure to allow it to be restored in a manner that is compatible with periodontal health. Biologic width considerations should be discussed with the patient as part of obtaining informed consent.

Long-Term Management Considerations — Because resorption has the potential for recurrence, it is important to monitor ICR cases closely with periodic periapical and CBCT imaging.19 This can be accomplished during routine periodontal maintenance visits. The prognosis of advanced ICR lesions is guarded. Therefore, it is imperative the patient be informed of the risks, benefits, and alternative treatment options — including the option of no treatment. For medicolegal reasons, this conversation must be documented in the patient’s record.

Craig A. Dunlap, DDS, is an assistant professor and acting director of the graduate program in endodontology at the University of the Pacific Arthur A. Dugoni School of Dentistry.

Chi Tran, DDS, MS, is an associate professor at the University of the Pacific Arthur A. Dugoni School of Dentistry. 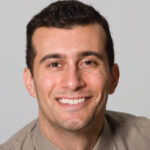 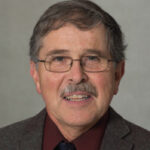 William P. Lundergan, DDS, MA, is a professor and the Wilbur and Ruth Hughes Endowed Chair in Periodontology at the University of the Pacific Arthur A. Dugoni School of Dentistry. 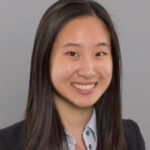