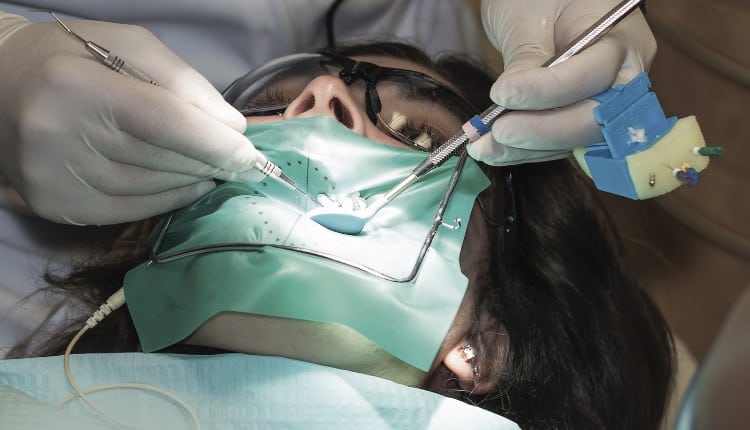 Regenerative endodontics is a biologically based approach that induces bleeding from the periapical region into the canal, thus generating vital tissue that provides a natural defense against reinfection 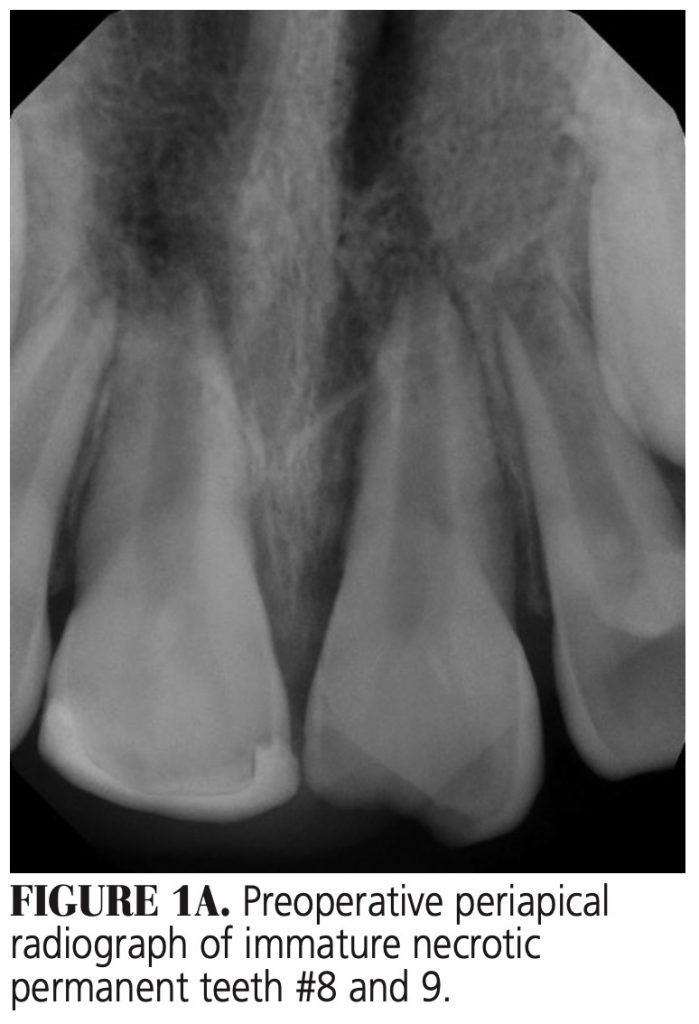 Clinically, regenerative endodontics was first developed for immature necrotic permanent teeth in order to achieve root end closure, with the additional goal of obtaining continued development of the root and thickening of the canal wall.4,5 Subsequently, regenerative endodontics has been performed on necrotic mature permanent teeth, vital mature permanent teeth, teeth that have resorption (i.e., history of trauma), and for retreatment of teeth obturated with gutta-percha and sealer.6–8

In conventional endodontic therapy, the canal is obturated with biocompatible foreign materials, such as gutta-percha and sealer. By comparison, in regenerative endodontics the canal is filled with the host’s own vital tissue (i.e., blood).9

After taking radiographs — periapical, bitewing and/​or cone beam computed tomography — and reaching a pretreatment pulpal and periradicular diagnosis that indicates the tooth is restorable without the need for a post and core, the treatment tooth is anesthetized and a rubber dam is placed.

Once canal access is obtained, hand files are used in combination with an apex locator and periapical radiograph to determine the canal working length. Following canal preparation (depending on the type of tooth: mature, immature, necrotic or vital pulp), the canal should be irrigated with 1.5% sodium hypochlorite (NaOCl); note that a lower concentration is used to avoid killing stem cells.10 When irrigating with NaOCl, it is clinically important to minimize the possibility of irrigant extrusion into the periapical region. After the canal is prepared and irrigated with NaOCl, it should be dried and irrigated with 17% ethylenediaminetetraacetic acid (EDTA) before placing calcium hydroxide in the canal. 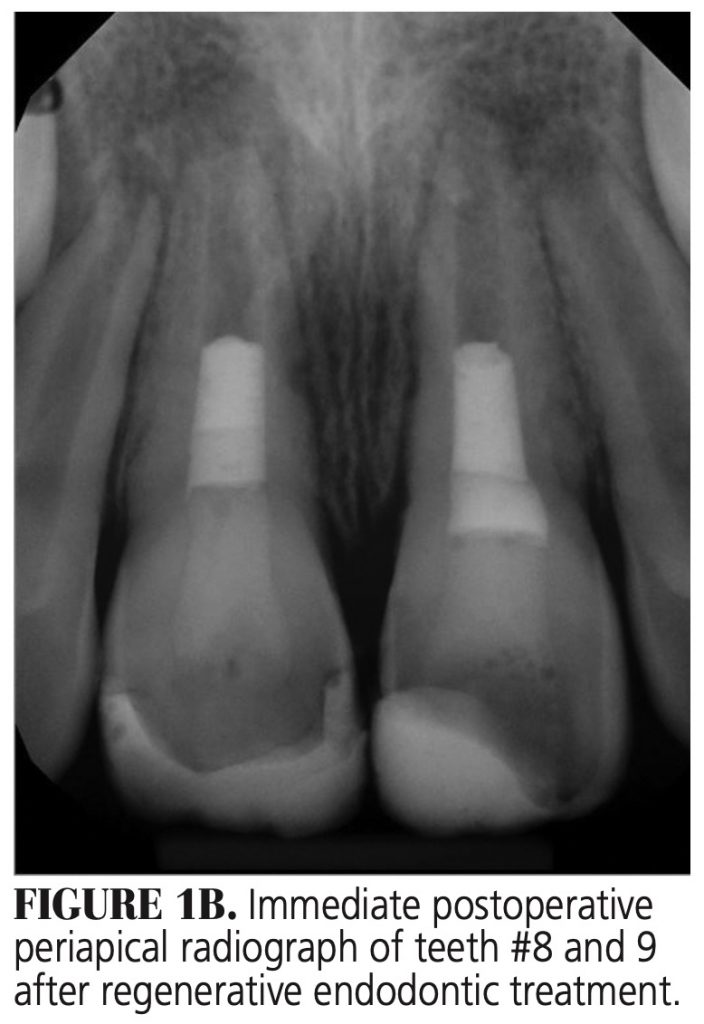 Next, the canal access is temporized with a sterile cotton pellet or sponge and a temporary filling material or glass ionomer. At this point, the patient should be asked to return in one to four weeks for follow-up treatment.9

At the second regenerative endodontic treatment appointment, the clinician should assess the patient’s response to the initial regenerative therapy. If there are signs or symptoms of persistent infection, providers should consider repeating the first treatment.9

If the tooth is asymptomatic, 3% mepivacaine without a vasoconstrictor should be used for local anesthesia (the lack of a vasoconstrictor will allow for periapical bleeding). After a rubber dam is placed and access achieved, 17% EDTA is used to irrigate the canal. This is done in conjunction with the use of files to remove the calcium hydroxide and prepare the dentin. The canal is dried and bleeding is induced with a hand file inserted 1 to 2 mm beyond the apical foramen. Bleeding should be stopped at a level in the canal (cemento-enamel junction) that will allow for 3 to 4 mm of restorative material.9 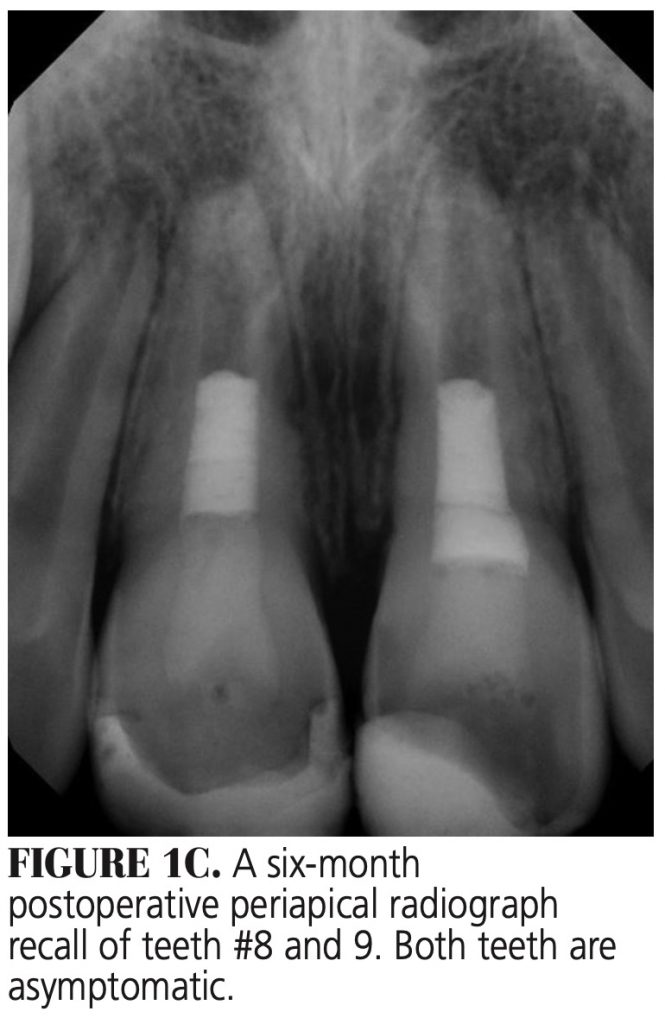 Clinically, it is important to know the primary goal of bioactive endodontic treatment is the elimination of symptoms. Secondary goals include radiographic healing and continued root development, and a tertiary goal is a positive response to sensibility testing (e.g., thermal testing or use of an electronic pulp tester).16,17

As noted, regenerative endodontics was first developed for immature necrotic permanent teeth.4,5 Prior to regenerative treatment, apexification procedures on immature necrotic permanent teeth were performed with either the use of calcium hydroxide or mineral trioxide aggregate.18 Unlike regenerative therapy, these procedures resulted in closing the apex, but did not help develop the root or thicken canal walls.4,5 Regenerative endodontics has subsequently been used for necrotic mature permanent teeth, vital mature permanent dentition, teeth with resorption, and for retreatment of gutta-percha- and sealer-obturated teeth presenting with persistent apical periodontitis.6–8

Although the basic regenerative endodontic clinical technique is similar when being performed on immature, mature, necrotic or vital permanent teeth, there are some clinical variations.1,9

Immature Necrotic Permanent Teeth — Removal of the necrotic pulp tissue from the canal with minimum canal preparation is required because the canal walls are thin and over-preparation can weaken the root structure, making it susceptible to fracture (Figures 1A through 1D).19 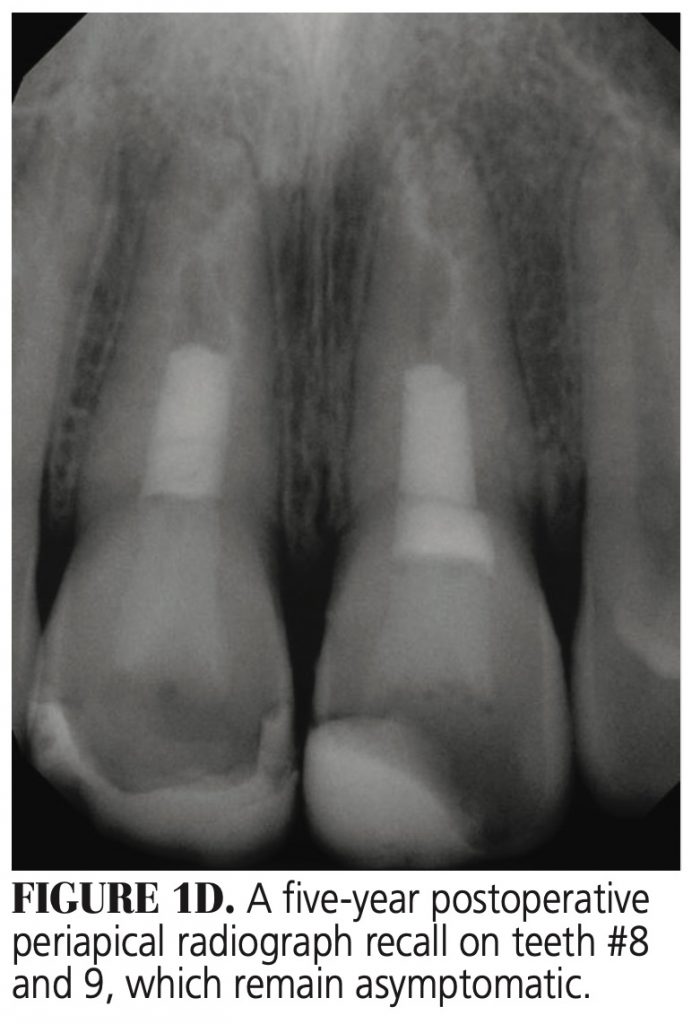 Mature Vital Permanent Teeth — Regenerative endodontic treatment of vital mature permanent teeth follows the same steps used for necrotic mature permanent teeth, except in vital teeth the bacterial infection component, as observed in necrotic pulp cases, is not the same (because little to no pulpal bacteria is present).21,22 Therefore, these teeth can be treated in a single visit, thus eliminating the need for placement of calcium hydroxide into the canal. In a study by Wang et al,23 the authors reported the existence of functional stem cells in clinically compromised dental pulp with irreversible pulpitis.

Traumatized Teeth With External Root Resorption — Regenerative endodontic procedures on teeth with external inflammatory root resection mirrors the technique used for immature, necrotic permanent teeth.8 Such treatment is performed with minimum canal preparation in order to prevent thinning of the canal walls and weakening of the root structure (Figures 2A through 2C).

It is important to note the older literature recommended regenerative endodontic treatment be used on root canals with an apical foramen at least 1 mm in diameter.24 The current literature states the final canal size of the apical foramen can be a master apical file size of 0.32 mm. This smaller size has been shown to still allow the blood cells from the periapical tissue to migrate into the canal space.9

The tissue generated in a canal after a regenerative endodontic procedure resembles cementum, bone and periodontal ligaments; in other words, tissues with blood vessels and nerves.9 Although these are not true pulpal tissue, they are the host’s own vital tissue.

This is important because (as compared to the use of foreign obturation materials, such as gutta-percha and sealer) this vital tissue contains immune defense mechanisms to protect itself from foreign invaders.9,21 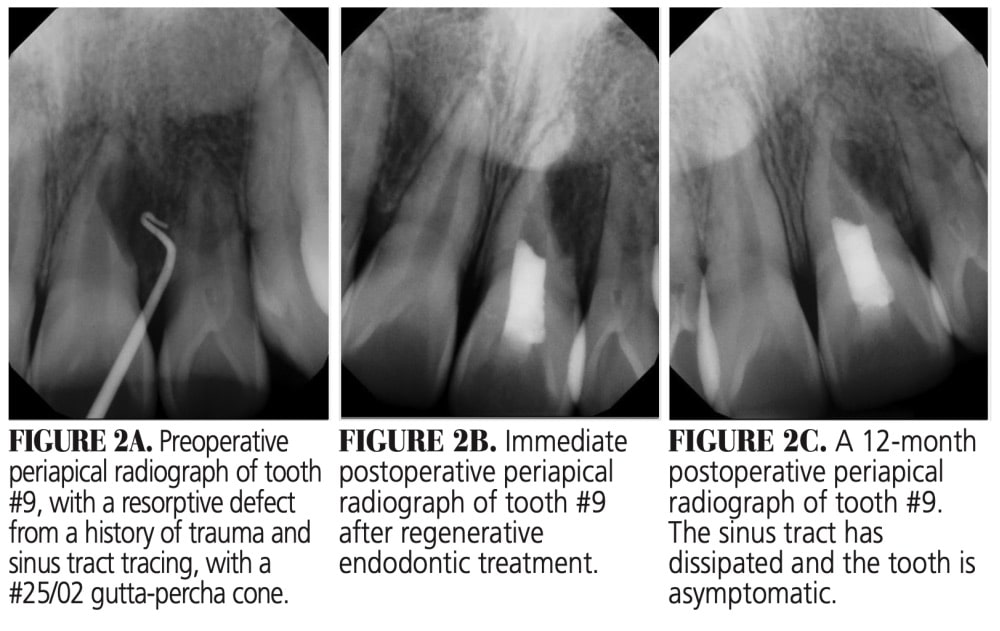 As opposed to conventional endodontic treatment, regenerative endodontics offers clinicians and patients a more biologically based approach. This technique involves canal preparation, followed by the induction of bleeding from the periapical region into the canal. The vital tissues generated in the canals after a regenerative procedure provide a natural defense against reinfection by pathogenic bacteria.

Although this approach has distinct clinical benefits, additional study is needed to confirm the long-term prognosis when bioactive endodontic treatment is utilized.

Qian Xie, DDS, PhD, is an assistant professor in the Department of Endodontics at the University of Illinois-Chicago College of Dentistry.

Steve Weeks, DDS, is a clinical assistant professor in the Department of Endodontics at the University of Illinois-Chicago College of Dentistry. 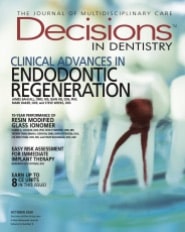