Endodontist Named Acting Director of the National Institutes of Health

The U.S. Department of Health and Human Services (HHS) has appointed endodontist Lawrence A. Tabak, DDS, PhD, as acting director of the National Institutes of Health (NIH). Tabak will lead the agency in an interim capacity until a replacement can be found for retiring NIH director Francis S. Collins, MD, PhD, who was the longest serving, presidentially appointed director, having served three U.S. presidents over more than 12 years.

Since 2010, Tabak has worked as NIH’s principal deputy director and deputy ethics counselor. He previously directed the National Institute of Dental and Craniofacial Research from 2000 to 2010.

According to HHS Secretary Xavier Becerra, “Tabak has a deep grasp of the most pressing scientific issues confronting our nation. He has earned respect across NIH as a thoughtful and strategic manager, and is committed to building a healthier and more equitable America.”

An elected member the National Academy of Medicine, Tabak’s major research focus has been on the structure, biosynthesis and function of glycoproteins. He continues work in this area, maintaining an active research laboratory within the NIH intramural program in addition to his administrative duties. 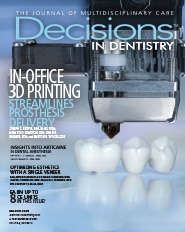