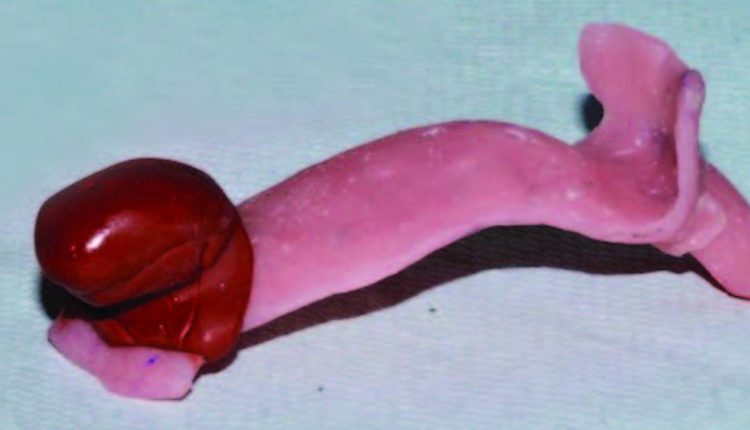 An accurate impression is essential to the development of an accurate master cast and well-fitting prosthesis.1 For the fabrication of removable complete dentures, a custom tray is recommended for border molding of the extension and contour of the vestibule, followed by a final impression to replicate the anatomy that will support the prosthesis.1 This is also true for maxillofacial prostheses.

Maxillary defects are a frequent consequence of head-and-neck cancer surgery. These, in combination with loss of dentition, can adversely affect chewing, deglutition and phonetics, and may distort facial appearance.2–4 The extension and location of the defect play an important role in choosing the optimal approach to care; for example, an obturator prosthesis may be advisable in cases where surgical reconstruction is not feasible.2 When acquired maxillary defects include the soft palate, tray extensions may be needed. These make tray insertion more difficult and uncomfortable, especially for patients with limited opening.

This report describes an alternative technique for fabrication of a maxillary custom tray for a patient with limited opening, an edentulous maxilla, and an acquired maxillary defect extending into the soft palate. Case planning called for treatment with an obturator prosthesis. The technique involves use of a sectional custom tray to capture the acquired maxillary defect and borders in separate stages, with the two sections joined in order to make the final impression.

A 72-year-old female was referred from the Boston University Cancer Center to the graduate prosthodontic clinic at the Boston University School of Dental Medicine for fabrication of an obturator to treat a soft palate defect produced by surgical removal of a non-Hodgkin’s lymphoma lesion. Clinical examination revealed an edentulous maxilla and mandible, and a surgical defect of approximately 2 cm diameter at the vibrating line, which involved both the hard and soft palate and communicated with the maxillary sinus. The patient also had an oral opening limited to 28 mm between the anterior maxillary and mandibular ridges. The patient’s chief complaints were her inability to speak clearly, and discomfort while eating and drinking.

1. A stock pediatric plastic maxillary tray was modified and extended with baseplate wax to capture the palatal defect. Fast-setting irreversible hydrocolloid was used to make a preliminary impression. A preliminary cast was made and used for fabrication of a custom tray.

2. Due to expected patient discomfort during multiple insertions of the tray while performing border molding (especially in the area of the maxillary defect), a sectional custom tray was fabricated using visible light-cured tray material. The tray was designed to allow separate border molding of the ac­quired maxillary defect (Figure 1) and periphery of the obturator, and consisted of two sections that could be locked together by inserting the handle of the medial section through a recess in the anterior of the peripheral section (Figure 2).

3. Molding of the acquired maxillary defect was performed using the medial section of the tray and red modeling compound. This area was contoured such that it would not obstruct nasal breathing and would maintain nasal resonance during speech.

4. The denture periphery was border molded using green modeling compound and the other tray segment.

5. Once border molding was completed, the segments were united into a single custom tray. Holes were made through both segments to relieve hydraulic pressure during the final impression. Next, adhesive was painted on the tray and compound material.

6. A final wash impression was made using a soft denture reline material chosen for its relatively high viscosity and ability to disengage from undercuts with minimal distortion.5 Overfilling of the tray was avoided so that soft tissues were not deformed by excess material (Figure 3).

7. The final impression was beaded and boxed and poured in Type III dental stone to obtain a master cast, which could then be used to complete the remaining steps of obturator fabrication.

The use of sectional trays has been a common solution for patients with limited oral opening.6–10 This type of custom tray has been reported as helpful in both border molding and final impression making for denture fabrication.11,12 Proper extension and contour of the tray is essential to the success of the impression procedure.4,13–15

When maxillary defects are present, it is important to include this area in the final impression and accurately capture the defect. The obturator bulb should be contoured to maintain nasal resonance during speech without obstructing nasal breathing or allowing nasal regurgitation.3,16–20

Among the possible advantages of using a sectional tray technique are simplified tray manipulation, increased patient comfort, improved ability to control impression material thickness, precise intraoral positioning, and stability of the sections of the tray during border molding. The indexing design should facilitate reassembly.10 Potential disadvantages include the time and materials required to fabricate the custom tray.10

The treatment of a patient with limited oral opening can be complicated. This, in addition to an acquired defect in the patient’s palate, necessitated an increased extension of the impression tray, which complicated border molding and impression making. A sectional custom tray helped overcome these difficulties and facilitated obtaining an accurate impression.

Acknowledgement: The authors thank William W. Bracket, DDS, MS, for his collaboration in the development of this manuscript. 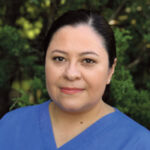 Marlen Robles-Moreno, DDS, CAGS, MSD, is an assistant professor and prosthodontist in the Department of Restorative Sciences at the Dental College of Georgia at Augusta University in Augusta. She has more than 17 years of private practice experience. Robles-Moreno can be reached at [email protected].

Andreina J. Sananez, DDS, MS, FACP, is an assistant professor in the Department of Restorative Sciences at the Dental College of Georgia at Augusta University in Augusta. A diplomate of the American Board of Prosthodontics, she can be reached at [email protected]. 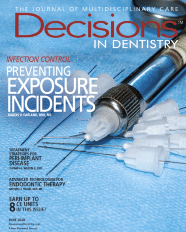