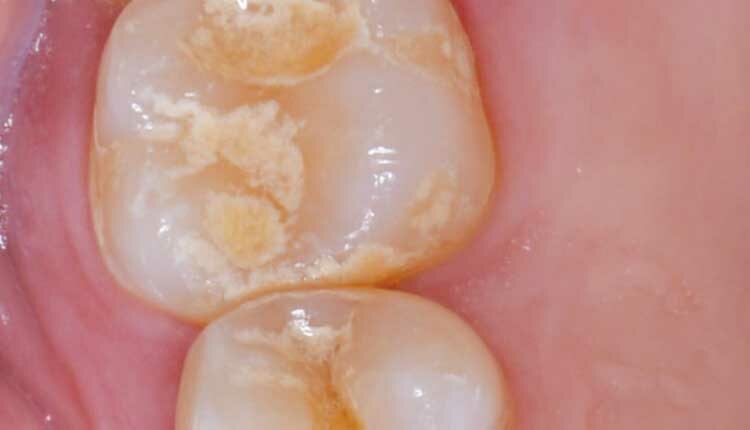 While the exact etiology is unknown, histological examination is needed to confirm a diagnosis of the reactive gingival overgrowth known as peripheral ossifying fibroma.

Known to originate from cells of the periodontal ligament,1 peripheral ossifying fibroma (POF) is a benign reactive lesion of the oral cavity. It was described by Shepherd et al in 1844 and later named by Eversol and Robin in 1972.2,3 About 60% of cases develop in the maxillary anterior region. These lesions are most commonly seen in the second and third decades of life, and most frequently present in female patients.4

The lesion appears as a reddish, slow-growing, solitary, well-defined focal mass of tissue on the gingiva and features a sessile or pedunculated attachment and smooth or ulcerated surface.5,6 The size of the overgrowth is usually 1.5 to 2 cm in diameter.5 While the exact etiology is unknown, POF in the gingiva may develop in response to local trauma caused by irritants, such as plaque, calculus, ill-fitting dentures or ill-fitting restorations.7 Patients may complain of pain or tenderness. Shifting of the teeth may be observed if the lesion is extensive.4

Usually, there are no radiographic changes in the interdental bone; however, in some cases, minimal erosion of the bone may be observed.5,7 Treatment includes simple excision of the lesion along with the periosteum underlying the lesion, and removal of local irritants.8

The purpose of this case report is to discuss an unusual and rare presentation of POF.

A 39-year-old woman with diabetes presented to the clinic at the Indiana University School of Dentistry for a lesion located distal to the maxillary right second molar (tooth #2). The patient had undergone localized scaling and root planing in the same region six weeks prior. She noted the swelling had started a few months before and caused discomfort during mastication. Clinical examination revealed a hyperplastic, reddish, sessile, ulcerated lesion in the edentulous alveolar ridge distal to tooth #2 (Figure 1). The lesion was tender and soft in consistency. Periodontal probing depths of 7 mm were noted at tooth #2, and 9 mm at tooth #3. Radiographic evaluation confirmed bone loss extending to the middle third of the roots on the distal sides of both teeth (Figures 2A and 2B), as well as generalized horizontal bone loss and multiple furcation involvement. The clinical examination showed the generalized presence of calculus and bleeding on probing, with probing depths ranging from 2 to 9 mm. The patient was diagnosed with generalized Stage III, Grade C periodontitis.

Scaling and root planing were repeated and completed at the first appointment. During the recall appointment at six weeks, the probing depths at teeth #2 and 3 were still 7 and 9 mm, respectively. While an open-flap debridement with distal wedge surgery was planned, tooth #2 tested non-vital and the patient opted to have it extracted. She was given postoperative instructions and pain medication, and was scheduled for follow-up at two weeks.

At the follow-up, an edematous, whitish bulge measuring approximately 1.0×0.8×0.5 cm, and with an erythematous halo, was noted in the extraction socket (Figure 3). The surface of the lesion was smooth and soft. An excisional biopsy was performed (Figure 4A), and histologic examination revealed a nodule of fibroblastic connective tissue surrounded by mature fibrous connective tissue and partially covered by stratified squamous epithelium. Irregular small islands of odontogenic epithelium were observed deep within the nodule, covered by a parakeratin layer (Figures 4B through 4D). Subsequently, a diagnosis of POF was established. Complete closure of the extraction site was observed after two weeks, and healing proved uneventful. At the six-month and one-year follow-ups, there were no signs of lesion recurrence (Figure 5 and Figure 6).

The presence of a 7-mm probing depth distal to tooth #2, along with the subsequent diagnosis of a non-vital pulp, indicated periodontal and endodontic involvement. The combined periodontal-endodontic lesion may have resulted from inflammation spreading from the distal aspect of the tooth to the periapical region.9 In addition, infection via lateral canals is a possibility.10 As prognosis of teeth with combined involvement is poor,11 extraction of the tooth was considered the best option. The presence of the soft tissue mass at the extraction site — which became more apparent at follow-up — was surprising. The exact nature and type of lesion was confirmed by histological analysis.

As noted, POF has a greater predilection for females (which may be due to the influence of estrogen and progesterone hormones),5,13 and it commonly develops in the anterior region of the maxilla. However, the location of the lesion in this patient is contrary to its usual appearance, as it was seen in the posterior region. Although POF have been known to develop from the interdental region,4 in this case the lesion appeared distal to site #2 in the edentulous space.

Based on the clinical findings, it is difficult to differentiate POF from pyogenic granulomas and peripheral giant cell granulomas. However, histologic analysis can help distinguish these lesions from other reactive lesions. Pyogenic granulomas exhibit proliferation of blood vessels resembling granulation tissue.1 In contrast, the presence of multinucleated giant cells in the fibrous stroma is characteristic of peripheral giant cell granuloma. On the other hand, POF shows the presence of fibrous connective tissue, with a large number of fibroblasts and collagen covered by stratified squamous epithelium. Based on the different stage of the fibroma, masses of woven bone or dystrophic calcifications and inflammatory cells may also be observed in the histological sections of the specimen.6,8,14,15 These findings were similar to the histological analysis of this study.

This report details an unusual and clinically rare presentation of POF. While clinical and radiographic findings can help lead to a provisional diagnosis, a definitive diagnosis can only be made following histological examination.

Kaveri Gandhi, BDS, MDS, is a resident in the Department of Periodontology at Indiana University School of Dentistry in Indianapolis.

Using Endodontic Therapy And an Endocrown to Treat Patients on Bisphosphonates