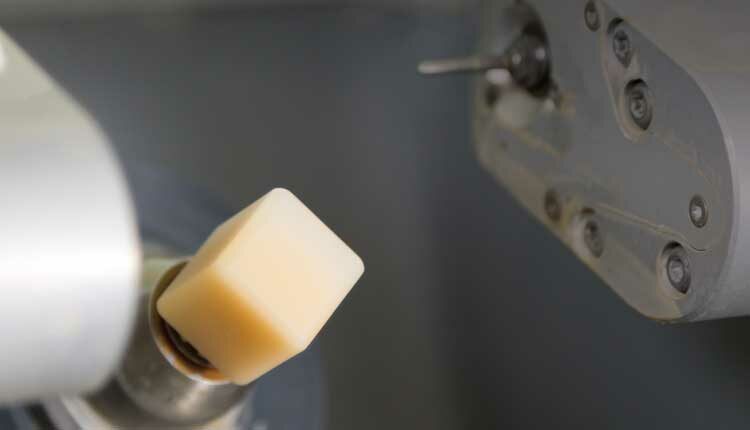 Using Endodontic Therapy And an Endocrown to Treat Patients on Bisphosphonates

This case report details the use of endodontic treatment and an endocrown as a solution for treating patients on bisphosphonate therapy.

According to the American Association of Oral and Maxillofacial Surgeons, the risk of developing medication-related osteonecrosis of the jaw (MRONJ) with oral bisphosphonates use is very low (approximately 0.1%), but it increases to 0.21% when the duration of therapy exceeds four years.1 The patient in this report was at low risk of developing MRONJ because the route of administration was oral, and the duration of her bisphosphonate therapy was less than four years. However, after presenting with pain in the lower-right quadrant and being informed of the risk of developing MRONJ with a surgical procedure, she elected to retreat tooth #30 rather than undergo an extraction or apicoectomy.

Three major challenges were evident in attempting to retreat the tooth in this instance. First, the tooth had previously been treated endodontically and contained three large posts, making the prognosis guarded. Second, minimal, healthy, coronal tooth structure remained after caries excavation, posing a challenge for the final restoration. Third, the patient was concerned about the expenses related to saving the tooth.

Contrary to what some patients believe, endo­dontic retreatments have a high success rate. In a large-scale study evaluating 4744 teeth that had endodontic retreatment, 89% remained functional after five years.2 Some clinicians may have reservations about retreating a tooth restored with three large posts due to the possibility of root fractures. However, a study by Abbott3 demonstrated that only one of 1600 teeth (0.06%) developed a root fracture during post removal, suggesting that with proper case selection and use of appropriate devices and techniques, root fractures are unlikely.

A 71-year-old female presented to the student emergency oral surgery clinic at the University of Florida College of Dentistry with the chief complaint of throbbing pain in the lower-right quadrant. Her medical history was significant for hypertension, hypothyroidism, severe muscle spasms and osteoarthritis. The patient previously took alendronate sodium for two years and then discontinued the medication for several months. At the time of her visit, she had resumed taking alendronate sodium for approximately one year. A periapical radiograph revealed apical involvement of tooth #30 (Figure 1). Subsequently, the patient was referred to the graduate endodontic clinic at the University of Florida College of Dentistry for evaluation.

Radiographic examination revealed a periapical radiolucency on the mesial and distal roots of previously treated tooth #30, which had been restored with three posts (Figure 1). Teeth #29, 30 and 31 underwent vitality testing, with #30 responding negative to cold, positive to percussion and palpation, and probing within normal limits. No swelling or sinus tract were present. Tooth #30 was diagnosed as previously treated with symptomatic apical periodontitis. Due to the patient’s use of oral bisphosphonates, retreatment was recommended over apicoectomy or extraction to minimize her risk of developing MRONJ. As noted, the prognosis was guarded due to the previous restorative treatment of the tooth with three large posts.

The retreatment of tooth #30 was initiated under dental dam isolation. The chamber was accessed with a round diamond bur and the three posts were exposed. The posts were removed with ultrasonic vibration and the remaining gutta-percha was completely removed with chloroform solution and rotary files. Cleaning and shaping were completed with rotary files and sodium hypochlorite. The tooth was then obturated via warm vertical condensation using gutta-percha and root canal sealer (Figure 2). A sponge was placed in the chamber and the access was sealed with glass ionomer. Nonobstructive occlusion was verified.

Minimal healthy coronal structure remained after caries excavation; therefore, it was decided that an endocrown would be the best solution as the final restoration. The temporary restoration and sponge were removed, and the chamber was accessed until the orifices were found (Figure 3). A core buildup was completed using a dual-cured, glass-reinforced, radiopaque composite system (Figure 4). The pulpal chamber of tooth #30 was prepared parallel to the occlusal plane to ensure stress resistance along the major axis of the tooth, and to allow for retentive element in the buildup material filling the chamber.

THREE MAJOR CHALLENGES WERE EVIDENT IN ATTEMPTING TO RETREAT THE TOOTH

The tooth was scanned and an endocrown was milled from A1-shade, lithium disilicate glass-ceramic block. The endocrown was tried in, and margins, occlusion and contacts were verified. Next, the endocrown was glazed and sintered. Tooth #30 was cleaned with a prophy cup and pumice preppies and isolated with cotton rolls. The endocrown intaglio surface was etched with hydrofluoric acid and silanated. The tooth preparation was etched for 15 seconds with 37% phosphoric acid and then scrubbed with 2% chlorhexidine antibacterial solution. This was followed by the application of a universal primer/​bonding agent.

The endocrown was bonded with an adhesive luting system following the manufacturer’s instructions (Figure 5). Excess cement was removed and occlusion was adjusted. A postoperative bitewing radiograph was exposed before dismissal (Figure 6). Follow-up appointments were done at three-month (Figure 7) and 1-year intervals (Figure 8 and Figure 9). The recall visits found the patient pain-free and asymptomatic, and periapical radiographs revealed healing within normal limits.

When restoring a tooth with a permanent crown, it is generally accepted that after occlusal and axial reduction, at least 2 mm of sound, opposing parallel-wall structure is needed.4 Following caries removal, minimal healthy coronal structure remained in this case, so determining the final restoration proved to be particularly challenging. If a short clinical crown exists, several techniques can be used to increase the length of the clinical crown, including placing the margin subgingivally, crown lengthening, or orthodontic extrusion.

It was determined that, in this case, placing the margin subgingivally would not provide the minimum 2 mm of sound tooth structure, and that crown lengthening or orthodontic extrusion were required. However, since the goal was to minimize the risk of MRONJ, crown lengthening or orthodontic extrusion were not utilized. Another consideration was doing a post-and-core buildup for retention of the final full coverage crown; however, it was desirable to conserve as much natural tooth structure as possible. As a result, an endocrown was selected to restore this tooth.

An endocrown is a hybrid restoration that falls between a full coverage crown and an onlay.5 Endocrowns offer several advantages over conventional crowns. This includes a more conservative preparation design that leaves much of the natural outer walls of the tooth untouched, as well as healthier gingiva (long-term) due to supragingival margins. Additional benefits involve the treatment’s esthetically pleasing results, especially when using high translucency blocks, and shorter chairtime.6

The design of the endocrown fabricated in this case report is very similar to a traditional endocrown because it combined the intraradicular post, core and crown into one component using computer aided design/​computer aided manufacturing (CAD/​CAM) technology.7,8 Since the endo­crown was anchored to the internal portion of the pulp chamber and on the cavity margins, it had both macromechanical retention (from the pulpal walls) and microretention (from the adhesive cementation).8

Clinicians are advised to use judgment when matching the esthetic and mechanical properties of the restorative material with the patient’s clinical presentation.9 As noted, a lithium disilicate glass-ceramic was selected for the restoration in this case due to its highly esthetic translucency and enhanced mechanical properties.10 Several studies have demonstrated that lithium disilicate is a reliable material; for example, a systematic review reported the two-year clinical survival rate for lithium disilicate single crowns as 100%.11 At five years, survival was reported at 97.8%, while 10-year survival rates were reported to be 96.7%.11

Expenses related to saving the patient’s tooth were also a factor in the decision-making process. This patient was having treatment rendered at a teaching institution; therefore, the costs of therapy were discounted. If the patient elected to have the tooth extracted and developed MRONJ, she would have faced significantly higher expenses — especially if she was treated with a nonsurgical approach, such as hyperbaric oxygen (HBO) therapy. One randomized controlled trial of HBO therapy demonstrated some improvement in wound healing, long-term pain scores, and quality-of-life scores in patients with MRONJ.12 However, it must be noted that the study subjects received 40 HBO treatments12 and the average cost of a single session is $405.13

Based on this case report, and with the clinical goal of reducing the risk of a patient developing MRONJ, endodontic retreatment and restoration with an endocrown is a viable treatment option if the clinician wishes to avoid performing surgical procedures on a patient who is taking bisphosphonates.

The results from this case report are consistent with the Salebrabi and Roststein2 study that shows endodontic retreatments have a high success rate. Furthermore, this case report demonstrates it is possible to esthetically restore an endodontically treated molar with extensive coronal tooth structure loss with a bonded lithium disilicate glass-ceramic endocrown. This therapy conserves tooth structure; it is also compatible with minimally invasive dentistry and is a cost-effective solution compared to treating MRONJ with nonoperative therapies. Clinical and in vitro studies agree that endocrowns are an excellent treatment for the restoration of endodontically treated molars with extensive loss of tooth structure.14 That noted, additional long-term follow-up and longitudinal clinical studies are needed to ensure the overall success of this treatment modality.

As evidenced by the clinical outcome of this case and supporting literature, endodontic retreatment and restoration with a CAD/​CAM endocrown represent a viable treatment approach for patients on bisphosphonate therapy so as to avoid performing surgical procedures that would increase the patient’s risk of developing MRONJ.

Fernando J. Haddock, DDS, is an assistant professor in the Department of Restorative Dental Sciences at the University of Florida College of Dentistry in Gainesville. Prior to joining academia, Haddock, who is an author and diplomate of the American Association of Dental Consultants, was in private practice for 20 years. He can be reached at [email protected] 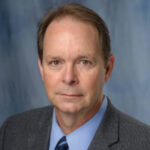 W. Stephen Howard, DMD, FAGD, is a clinical professor and director of the Division of General Dentistry, Department of Restorative Dental Sciences, at the University of Florida College of Dentistry. 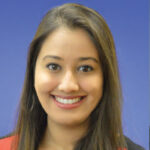 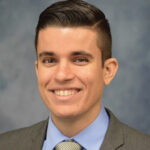 Frank Berdos, DMD, is an endodontist in private practice in Tampa, Florida.