This clinical report presents the use of a diode laser for a gingivectomy procedure in a case of excess gingival clinical crown coverage due to altered passive eruption.

Lasers are used as a principal instrument or adjunct in many dental procedures today. Depending on the application, clinicians have their choice of technologies, as various therapies require different laser wavelengths due to the nature of how tissue reacts. Dental lasers include those either primarily or exclusively used on soft tissue (such as Nd:YAG, diode and 10.6.-µm CO2 units), devices often thought of as hard-tissue lasers (Er:YAG and Er,Cr:YSGG), and technologies selectively suited for either hard or soft tissue procedures (examples include Er:YAG and 9.3-µm CO2 units). Applications for soft tissue use include sulcular debridement, the laser-assisted new attachment procedure, reduction of bacterial levels, biopsies, frenectomies and gingivectomy procedures. The use of lasers as an adjunctive or alternative option may facilitate treatment and has the potential to improve healing.1 Potential advantages over conventional methodologies include improved precision and visualization for operators, and less discomfort for patients.2,3 Lasers are becoming an adjunctive treatment methodology, as well as a stand-alone addition to the dental armamentarium.4

A common application for soft-tissue lasers — including diode models that operate at wavelengths between 655 and 980 nanometers (nm) — include the subject of this clinical report, the laser gingivectomy procedure.

Patients are becoming increasingly aware of facial esthetics and treatments to improve their smiles. A common complaint in dental offices comes from patients who are unsatisfied with their “short” clinical crowns. Common causes include coronal destruction resulting from injury, caries or attrition, as well as tissue hyperplasia or a phenomenon known as passive eruption.5 Eruption occurs in two phases, active and passive. Active eruption is the movement of the tooth out of the alveolar bone into the occlusal plane. Passive eruption is the apical migration of the dentogingival junction and exposure of the crown of the tooth. Altered passive eruption is the failure of the gingiva to migrate apically, which occurs in approximately 12% of the population.5 Gingivectomy, the excision or removal of gingiva, is clinically indicated to reduce infection and decrease the depth of the gingival sulcus in these patients.

A 58-year-old female presented to The Dental College of Georgia at Augusta University AEGD/GPR clinic with a chief complaint of “my teeth are short and the tissue is bulky.” She was especially concerned with the maxillary left central incisor. After speaking with the patient, a complete oral examination was performed that included preoperative photographs (Figure 1). Her lip length was measured at 22 mm (the average for females is 22 to 24 mm). Periapical films of the anterior maxillary teeth (Figures 2A through 2D) revealed the close proximity of the cementoenamel junction (CEJ) interproximally, although these images only offered an estimate. Bone sounding was completed to locate the bone proximity to the CEJ and free gingival margin (Table 1). Measurements were taken from the patient’s right to left, starting with the distal of the maxillary right lateral incisor. The bone was determined to be 2 mm apical to CEJ on the right lateral and central incisors, and 1.5 mm apical to the CEJ on the left central and lateral incisors. It is important to note that due to the thin characteristics of the facial bone plate (0.5 to 1.0 mm), these measurements may present some inaccuracies; cone beam computed tomography would have been helpful.

The patient was advised that for best results (i.e., to avoid rebound of tissue), clinical crown lengthening was needed to bring the bone 3 mm apical to the CEJ. An adjunctive gingivectomy procedure was also recommended to help contour the soft tissue, detach the bulbous fibrous tissue (especially around both maxillary central incisors), and reduce her pocket depths. The patient elected to proceed with the gingivectomy before attempting a crown-lengthening procedure.

Local anesthesia was completed with 36 mg of 2% lidocaine with 0.18 mg 1:100K epi in the buccal vestibule of the maxillary incisors. Measurements were made with a periodontal probe following the maximum reduction measurements (Table 1) and bleeding points made with an explorer (Figure 3). A 980-nm diode soft tissue laser was set to continuous mode with 0.5-watt amplitude. The laser was initiated by touching the tip to occlusal paper at 45 degrees and running it along the paper until smoke was released. The tip of the laser appeared dark black. Following initiation, the laser was changed to pulsating mode and 0.6-watt amplitude. The laser was used with low, brush-like movements, starting with the distal of the maxillary right lateral incisor to the maxillary left lateral incisor (Figure 4 and Figure 5).

The watt amplitude was increased slowly during the procedure. As the pigment of the keratinized gingiva lightened above the maxillary left central incisor, the watt amplitude was increased to 1.2. The laser is attracted to darker pigments, so amplitude adjustment is necessary for more efficient cutting in lighter pigments. Minimal bleeding during the laser process helped with immediate visualization of the results. White spot lesions of the enamel were present underneath the excised tissue (Figure 5), but the appearance was shiny, indicating that remineralization had occurred. The patient was given one 600 mg ibuprofen tablet immediately following the procedure and self-reported postoperative pain as minimal (1 on a scale of 10).

Postoperative evaluation was completed three weeks after the laser gingivectomy procedure. The patient was pleased with the esthetic outcome (Figure 6) and did not want to proceed with an osteoplasty. The area was anesthetized with 36 mg of 2% lidocaine with 0.18 mg 1:100K epi, and bone sounding was completed for pocket depth evaluation, as recorded in Table 2.

In the authors’ opinion, the diode laser was simple, safe, efficient and easy to use for this procedure. As demonstrated in this clinical report, it offered precise cutting capability, eliminating the need for a surgical blade. Additional benefits of the laser included hemostasis of tissue that allowed excellent clinical visualization during the procedure (including the outline of the new gingival margin position), and improved patient comfort. Ultimately, the patient reported being satisfied with the initial overall results. 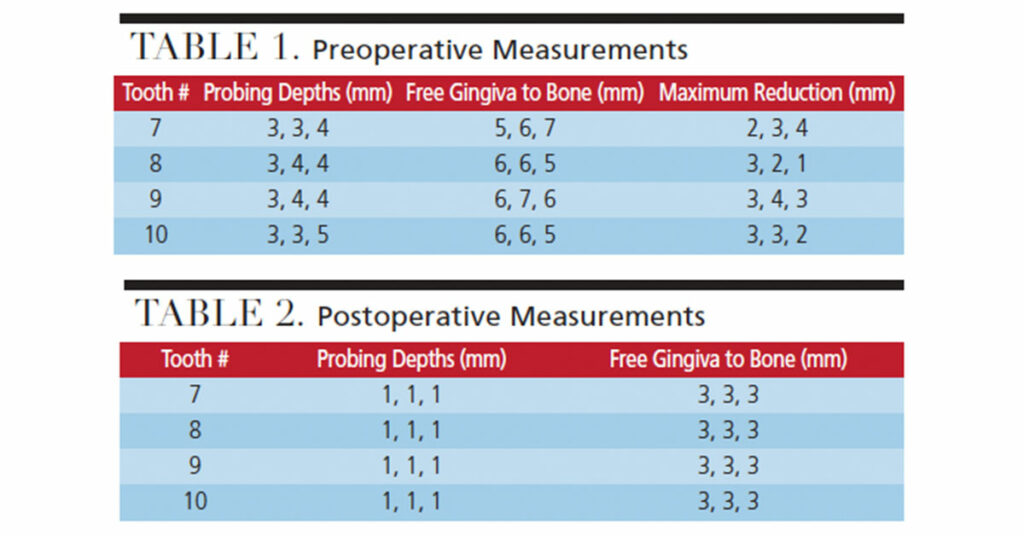 Michael Pruett, DMD, is an assistant professor in the Department of Restorative Sciences at The Dental College of Georgia at Augusta University, where he directs the general practice residency program, and codirects The Augusta University American Academy of Implant Dentistry maxi-course and other continuing dental education courses. A national and international lecturer, Pruett is a diplomate of the International Congress of Oral Implantologists, and a fellow in the International College of Dentists and Pierre Fauchard Academy.

John F. Coleman, DMD, is assistant director of the general practice residency and advanced education in general dentistry residency programs at The Dental College of Georgia at Augusta University, where he also practices in the faculty clinic. A member of the Thomas P. Hinman Society and Pierre Fauchard Academy, Coleman is a fellow in the International College of Implantologists. Prior to teaching, he maintained a general dental practice for 28 years.

Kristen M. Bonkowski, DMD, is a general dentist practicing in Westfield, Massachusetts. A member of the American Dental Association, Academy of General Dentistry (AGD) and Massachusetts Dental Society, she earned a fellowship award in the International College of Implantologists and is working toward her fellowship in the AGD.

Courtney S. Babb, DMD, is an instructor in the Department of General Dentistry at The Dental College of Georgia at Augusta University. She was an associate in private practice for five years before pursuing an academic career.

Mario F. Romero, DDS, is an associate professor in the Department of Restorative Sciences and director of the advanced education in general dentistry program at The Dental College of Georgia at Augusta University. Romero maintained a private practice for 15 years prior to joining the university in 2013. He can be reached at maromero@augusta.edu.

Role of the Infection Prevention Coordinator