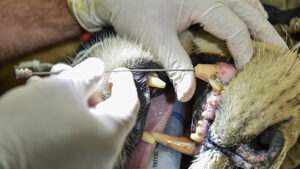 Today, dental treatment provided to animals is also performed using the latest technologies. Saving the teeth of animals is essential for basic needs such as eating but also for self-defense, and root canal treatments can prevent potentially life-threatening infections. The following three examples demonstrate how modern solutions provided by Dentsply Sirona Endodontics can also be used to help some surprising patients in an easier, faster and safer way.

Ballaigues/Salzburg, 18. December 2017. Endodontic therapy salvages teeth that have had their pulp irreversibly affected due to exposure to the oral cavity by fracture or caries of the tooth crown. Such exposure typically initially results in pain. This often leads to difficulty in eating and temporary behavioral changes in the animal. The exposure usually results in degeneration of the pulp, eventual abscessation and related lysis of bone at the tooth apex. Endodontics will not salvage a periodontally compromised tooth.

In recent years, to address this need, endodontics has morphed into a veritable high-tech discipline within dentistry. Here Dentsply Sirona Endodontics is breaking new ground and has been a long-standing supplier of cutting-edge instruments and materials to ensure successful root canal treatments in humans. These instruments and materials can also be used for treating animals.

An 8-year old female bottlenose dolphin called Dumisa, who had been suffering from general dental abrasion underwent hours of root canal treatment. The unusual and complex procedure was carried out in Hong Kong by South African veterinary dentist Cedric Tutt, ESAVS, MMedVet (Med), BVSc, following months of preparation using props to acclimatize Dumisa to the procedure. State-of-the-art endodontic therapeutics were used to treat one damaged tooth by root canal treatment while up to 18 others are in different stages of treatment, all performed without anesthesia or restraint of any kind.

For the root canal procedure, preparation, compounding and filling of the canal, Tutt used products from Dentsply Sirona Endodontics. He explains: “Dumisa was suffering from general dental abrasion. In the past we would have had no other choice but to extract them all, we can now maintain Dumisa’s teeth by performing root canal treatment using a specialized endodontic cement that helps heal the bone surrounding the root.”

Hong Kong’s Ocean Park was the stage of the world’s first root canal treatment of this kind performed on a dolphin, which necessitated a whole day of patience from a team of dedicated veterinarians and animal trainers. Some of Dumisa’s teeth were worn, exposing the central, living part of the tooth, the pulp, which had subsequently died. Radiographs had also shown signs of inflammation, a great source of discomfort for her. “The training and veterinary teams of Ocean Park in Hong Kong worked with Dumisa for months to get her used to the dental instruments, encouraged her to keep her mouth open and enhance her willingness to have her teeth ‘x-rayed’. They used harmless props such as a model of a portable x-ray machine and electric toothbrushes, to help her appreciate that the operation was safe. This operation could never have happened without her cooperation,” says Tutt. Dumisa was left to swim freely in the pool and the treatment was successfully completed in stages as Dumisa allowed. A Film about that very special treatment can be watched via https://youtu.be/VfSDeZLU7E4.

Two adult lions received an extensive dental procedure as a result of fractured canine teeth. Although tooth fractures are common in big cats, the treatment of these fractures is still relatively new. Gerhard Steenkamp, BSc, BVSc, MSc, PhD, a South African veterinary surgeon with 20 years of experience voluntarily performed the surgery. He has performed in excess of 300 dental procedures on carnivores including bears, cheetahs, hyenas, and leopards, and has executed over 100 root canal treatments and extractions on lions and tigers alone.

The endodontic treatments performed at the Abu Dhabi Wildlife Centre are similar to the procedures performed on humans with the same condition; the main difference being the size of the files. The procedure involved the removal of the pulpal tissue to the apex of the root in the canine teeth to remove the infection. Dentsply Sirona Endodontics specifically developed a sequence of Hedstroems from ISO 030 to ISO 180, enabling Steenkamp to remove the pulp tissue with ease. The files from 030 until 140 increased in increments of ten, and then by twenty up to 180. The active part of the file was 60 mm, and the total length without the handle reached 150 mm. By using Dentsply Sirona Endodontics files in the future, Dr. Steenkamp will be able to reduce the amount of time the animals are under anesthesia, in turn lessening the profound effects of it on an animal’s physiology.

For the male lion, the fracture of his tooth was saved by a root canal treatment. The internal aspect of the root canal was sterilized and filled with gutta-percha which was cemented in place, and a simple restoration was completed on top. For the lioness, a root canal treatment was performed on one canine, but on the other canine the pulp tissue had deteriorated and bacteria had lodged into the fractured tooth creating a chronic abscess. In this case, extraction was the only option. Both lions recovered rapidly from the procedures and were soon roaring again in the afternoon.