At present, there is a fairly broad agreement that chronic (as opposed to acute) inflammation is bad for your health.

At present, there is a fairly broad agreement that chronic (as opposed to acute) inflammation is bad for your health. Previous editorials have dealt with the idea that multiple systemic issues can result from this negative type of inflammatory response, and the possible role of gut microbiota — part of the microbiome — in the process. Evidence is beginning to emerge that this flora can have wide-ranging effects on your health. In general, if good bacteria are established and can be maintained, you will be healthier. The opposite also appears to be valid. Recent research has focused on the role of dietary fiber in this process.

In complementary studies from Georgia State University and the University of Gothenburg,Sweden, researchers looked at the total mass of gut bacteria in healthy mice. Next, they switched the mice from fiber-rich food to a low-fiber diet with lard, sugar and only 20% protein. This resulted in a change in the type of bacteria found in the gut. The intestines shrank and the mucous layer that protects the intestinal wall from the gut bacteria became thinner. This thinning brought the gut bacteria in closer contact with the intestinal wall, resulting in chronic inflammation in the subject animals. The mice also gained weight and had higher blood glucose levels than controls.

Evidence is mounting that a balanced gut microbiota contributes to a healthy microbiome, which, in turn, keeps inflammation in check

However, the researchers found that if a fermentable fiber (inulin) was introduced, it ameliorated the effect of the high-fat diet. Essentially, the inulin increased the number of intestinal absorption cells enterocytes, and restored diversity to the gut microbiota. In addition, these subjects’ mucus layer was healthier than in mice that did not get the fiber, which meant that gut bacteria were kept further away from the intestinal wall, thus reducing the inflammatory response.

In a second study, mice on a high-fat diet were introduced to a species of fiber-feeding bacteria. These subjects produced more protective mucous than groups without the bacteria. One of the by-products of the digestive process was a compound that could be used as a type of fuel. That is, once these bacteria finished digesting the fiber, their by-products were absorbed by the intestinal wall and used to produce energy.

The research also showed that a large volume of gut bacteria died in mice fed a low-fiber diet, resulting in unbalanced microbial diversity. Both papers support the notion that diets lacking in fiber promote an unhealthy microbiota. In addition, such diets encourage bacteria to encroach into the intestinal mucous, contributing to inflammation.

The takeaway is that evidence is mounting that a balanced gut microbiota contributes to a healthy microbiome, which, in turn, keeps inflammation in check and promotes systemic and oral health. In other words, eat your veggies. They’re good for you. 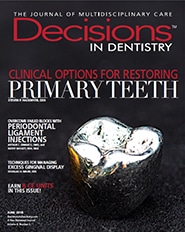