Expanding on a global scale, this threat needs to be urgently addressed across all health care fields.

By Katherine Schrubbe, RDH, BSDH, MEd, PhD On Feb 1, 2016
0
Share
Antibiotic Resistance is expanding on a global scale, this threat needs to be urgently addressed across all health care fields.

As important members of the health care team, dentists must have a clear understanding of what is happening in the microbial world. Novel viruses and bacteria can emerge at any time, and may pose a risk for health care providers. The outbreak of Ebola in West Africa, which then appeared in the United States, is an example of how pathogens can impact public health.1,2

In the dental setting, it’s impossible to know which microorganisms may accompany a patient to the chair. Health histories provide self-reported pictures of patients’ current health status, but their accuracy cannot be guaranteed. A comprehensive review of patients’ health histories prior to providing treatment is critical. Patients may not report certain conditions due to the stigma attached to the problem or because they don’t think it’s important. Standard precautions should always be implemented to reduce the risk of disease transmission, and to protect dental professionals and patients.3,4

Another threat to effective infection control and the protection of health care workers is antibiotic resistance — which, according to the U.S. Centers for Disease Control and Prevention (CDC), is also known as antimicrobial resistance. The CDC reports that at least 2 million people in the U.S. are infected each year with bacteria that are resistant to antibiotics, and 23,000 die as a direct result of these infections.5 More deaths are caused by conditions related to antibiotic-resistant infections.5

Many of these antibiotic-resistant infections are spread through direct or indirect contact, putting oral health professionals at risk. Direct contact means interaction with the microorganisms at their source, such as the oral cavity or skin.5 Indirect contact occurs when a dentist is exposed to the microorganism through an intermediary item, such as a needle, instrument, piece of equipment or surface.3 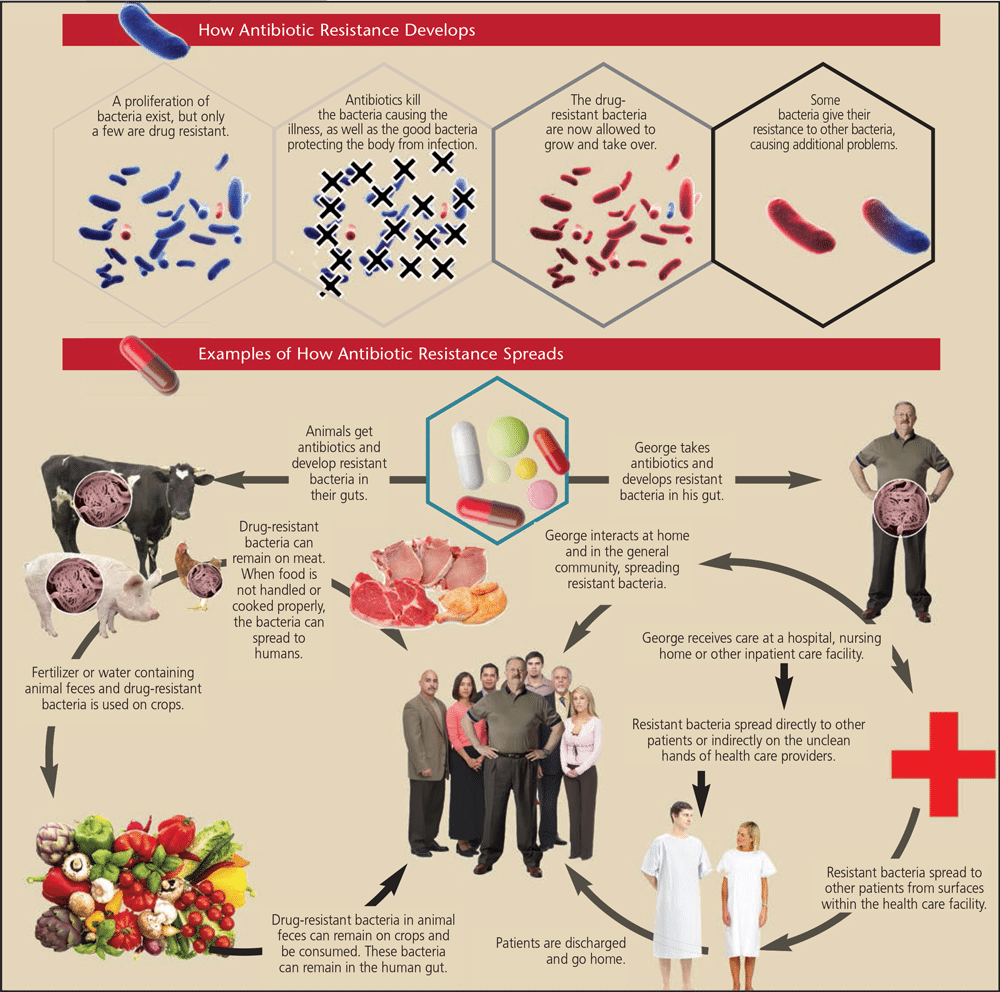 According to the CDC, the use of antibiotics is the single most important factor leading to antibiotic resistance around the world. Antibiotics are among the most commonly prescribed drugs in medicine, but up to 50% of these prescriptions aren’t needed.5 The report notes that humans’ exposure to antibiotics is vast, as they are commonly used in food-producing animals to promote growth and prevent, control and treat disease. Drug-resistant bacteria are present in water and animal feces, and when used on crops, their spread continues. Once individuals develop resistant bacteria, they can spread them through direct contact. Figure 1 provides more detail on how antibiotic resistance develops and spreads.5

The second section of Antibiotic Resistance Threats in the United States, 2013 focuses on four strategies to fight antibiotic resistance:

If infections can be prevented, the need for antibiotics decreases, which slows the pace of antibiotic resistance. The CDC is tracking the prescribing methods of health care professionals and is working to improve these protocols to reduce the use of antibiotics.5

Promoting the responsible use of antibiotics — known as “antibiotic stewardship” — is the third strategy. The CDC reports that, on a global basis, health care professionals increasingly are adopting the principles of responsible antibiotic use, including prescribing antibiotics only when necessary to treat, and, in some cases, prevent disease; choosing the right antibiotics for the infection at hand; and administering them in the correct manner in every case.5 Effective stewardship ensures that each patient derives maximum benefit from antibiotics, avoids unnecessary harm from allergic reactions and side effects, and helps preserve the lifesaving potential of these drugs for the future.5

Here’s a brief look at some key programs and terms that may prove useful when discussing antimicrobial resistance.

Antimicrobial Agent: Among the antimicrobial agents in use today are antibacterial drugs, antiviral agents, antifungal agents and antiparisitic drugs.

Antimicrobial Resistance: The result of microorganisms evolving in ways that reduce or eliminate the effectiveness of drugs, chemicals or other agents used to cure or prevent infections. Antibiotic resistance is one type of antimicrobial resistance.

Multidrug Resistant: A term used to describe microorganisms that are resistant to multiple classes of antimicrobials. The exact number of drugs that a microorganism is resistant to varies depending on the infection or pathogen.

Superinfection: An infection following a previous infection, especially when caused by microorganisms that are resistant or have become resistant to the antibiotics used previously. 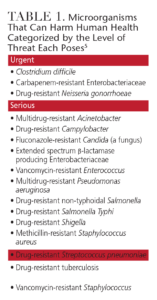 The final section of Antibiotic Resistance Threats in the United States, 2013 lists the current antibiotic-resistant organisms that pose a threat to human health, and categorizes them as urgent, serious or concerning (Table 1).5 The organisms that pose an urgent threat cause widespread illness and death in patients who acquire the associated infections that often become resistant to nearly all available antibiotics.5 These bacteria require immediate and aggressive action — for example, Clostridium difficile causes life-threatening diarrhea and is passed via contact transmission. Many C. difficile cases occur in patients who have been on prolonged antibiotic therapy.6

Microorganisms characterized as a serious threat necessitate prompt and sustained attention to keep the risks they pose from growing. The label of concerning threat means that the microorganisms need careful monitoring and preventive action to ensure they don’t move into the higher threat levels. The report provides a wealth of information on each of the bacteria included within all three threat categories, including how health care professionals can support the CDC’s efforts to reduce the threat posed by these microorganisms.

Oral health care providers need to be aware of antibiotic-resistant organisms and how they can support the battle against them. By keeping up to date and adopting the CDC’s strategies to reduce antibiotic resistance, clinicians can protect their team’s health, as well as the health of patients.

Katherine Schrubbe, RDH, BSDH, MEd, PhD, is director of quality assurance at Dental Associates of Wisconsin and has been in dental education for more than 30 years, serving on the Marquette University School of Dentistry faculty as an adjunct associate professor in the Department of Clinical Services. She is an active member of the Organization for Safety, Asepsis and Prevention. Schrubbe has authored numerous articles on infection control, and speaks nationally on the subject.