Solving the Crisis in Little Teeth

While there has been much angst and hand wringing over the early childhood caries (ECC) epidemic, significant progress has been made addressing this crisis in what the American Academy of Pediatric Dentistry (AAPD) calls “little teeth.”

While there has been much angst and hand wringing over the early childhood caries (ECC) epidemic, significant progress has been made addressing this crisis in what the American Academy of Pediatric Dentistry (AAPD) calls “little teeth.” Yet, despite these advances, evidence suggests that ECC is still a significant threat.1,2 In response, the academy — along with like-minded groups — remains committed to raising awareness about ECC and finding ways to eliminate this preventable disease.

In its “The State of Little Teeth” report,3 the AAPD describes ECC as the most common chronic early childhood disease in the United States. The report cites data that indicate tooth decay affects approximately one in four Americans ages 2 to 5,4 and that by age 5, approximately 60% will have experienced caries.5,6 In addition, caries is often untreated in children under the age of 3.7 Among the socioeconomic issues associated with the crisis, low income is strongly correlated with ECC (Figure 1): Simply put, the poorer the household, the greater the likelihood that caries will go untreated. Among the 5-year-old to 17-year-old demographic, for example, 80% of untreated decay is found in 25% of the population — mostly among low-income and other vulnerable groups.8–10

The issues fueling the ECC crisis are myriad, but some of the chief drivers are:

Two of our most effective tools against ECC are the early dental visit and establishing a dental home by age 1. Combined, these steps will allow clinicians to prevent or treat caries in its earliest stages. They also provide opportunity to educate parents and caregivers about the causes and risks of ECC, the importance of healthy dietary practices and oral hygiene, and ways to limit exposure to caries-causing bacteria.2

As part of efforts to address the crisis, the AAPD advocates that, as a profession and nation, we need to do more to ramp up dental benefits, improve access to care, and increase the number of dentists who are prepared to treat young children. It also encourages providers, parents and caregivers to “close the gap between knowledge and action.” The goal is not only to educate parents and caregivers about the importance of oral health, but also to motivate them beyond good intentions to actually take the entire family — infants and toddlers included — to the dentist regularly.

Caries lesions are preventable, but only if we work diligently toward the ultimate goal of eradicating this all-too-common disease. 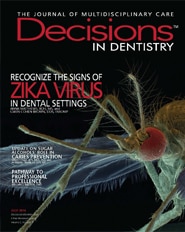