Role of Medication in Osseointegration of Dental Implants

As part of risk assessment in implant treatment, clinicians should consider how medications affect osseointegration.

Over the past three decades, the success of implant-supported restorative treatment has spurred substantial growth in the number of implants being placed and restored in patients presenting with full or partial edentulism. Increasing demand from patients — and a dramatic increase in marketing by implant companies — have convinced patients and providers of the infallibility of implant-supported restorative care. However, clinical practice and evidence from clinical research has indicated this is not always the case. Saving teeth should be a primary consideration whenever possible. In an editorial published in 2016, Giannobile and Lang1 wrote, “If we select an early removal of compromised teeth paradigm, the dental profession will lose most of its expertise in preserving a functional dentition for a lifetime.”

When considering implant treatment, clinicians must evaluate whether implants are the best option to restore the patient’s function and esthetics. Comprehensive patient assessment, combined with a well-established diagnostic process, help facilitate optimal treatment outcomes. This article reviews preoperative assessment of patients, with a focus on the medications that can affect osseointegration of implants. In addition, two cases are presented of patients who opted to have implant-supported restorative treatment.

In preparation for dental implant placement, it is important to carefully assess patients from a clinical and radiographic perspective. There are additional considerations, however, and it would behoove clinicians to become more sophisticated in reviewing medical histories, as well as the medications patients are using for the management of systemic diseases.

The following list will help implant providers assess risk in implant candidates. Patient assessment should include:2,3

EFFECT OF MEDICATIONS ON OSSEOINTEGRATION

As the global population grows and ages, many patients visiting dental offices for routine treatment are on multiple medications for various conditions. Recent information is beginning to suggest practitioners need to pay careful attention to medication use, as these drugs can impact outcomes for implant-supported restorative treatment.4

Polypharmacy, which is defined as the simultaneous use of multiple medications for one or more conditions, has become common in the United States. Patients who present to dental offices seeking care are often taking several medications, some of which may interfere with osseointegration of dental implants. Available data on the incidence of medication use suggest that from 2000 to 2008, the percentage of Americans using at least one, two or five prescription medications increased from 44% to 48%, 25% to 31%, and 6% to 11%, respectively. This is especially significant in the older patient population. Data indicate that eight or more prescription medications are used by 30% of this population daily, with an average of 18 prescription medications taken per year.5

Accordingly, careful assessment of medication use and an understanding of how various medications affect osseointegration are necessary for successful implant treatment.

Following surgical placement of a dental implant, the surrounding soft and hard tissues undergo a series of changes as the four phases of osseointegration unfold; these include homeostasis, inflammation, proliferation and remodeling. Certain medications can lead to changes affecting any of these phases. This further underscores the need to pay close attention to the medications taken by implant patients.

In this context, medications can be classified into four groups, including drugs that affect:

The effects of medications on healing are not always clear-cut, as they appear to have both positive and negative impacts on soft and hard tissues, which complicates their effect on tissue healing. This adds to the complexity in determining the relationship between medications and the outcome of implant placement and restoration.

ROLE OF MEDICATIONS ON HEALING

Some examples of medications that affect wound healing and bone remodeling positively include metformin online, a commonly prescribed anti-diabetic drug. Medications that can negatively affect bone include thiazolidinedione, heparin and some antineoplastic drugs. Among the drugs affecting homeostasis and early wound healing, anti-vascular endothelial growth factor (anti-VEGF) has been shown to have a negative impact on osseointegration in vivo.6 The two most widely used anti-VEGF drugs are ranibizumab and bevacizumab, which bind to all three forms of VEGF.

Drugs interfering with central pathways include medications that exert either beneficial or negative effects on bone. The former group includes drugs that target the central nervous system, such as β-blockers, thiazide diuretics, angiotensin-converting enzyme inhibitors, and angiotensin II receptor blockers,7,8 which are all commonly prescribed. Some medications may have a negative effect on bone, however. This includes drugs targeting the central nervous system, such as selective serotonin reuptake inhibitors (SSRIs),8 antiepileptic drugs, opioids, glucocorticoids and alcohol. In 2014, Wu et al9 reported that patients on SSRI treatment had a higher risk of osseointegrated implant failure. They concluded SSRIs may cause bone loss by inhibiting the bone-remodeling processes triggered by mechanical loading following implant restoration.

Drugs that interfere with immune pathways include medications that exert negative effects on bone, such as nonsteroidal anti-inflammatory drugs (NSAIDs), which have been shown to negatively affect osseointegration in vivo.10 However, a randomized, double-blind placebo-controlled trial demonstrated that oral administration of 600 mg of ibuprofen four times daily for seven days had no significant effect on loss of bone level after three months or six months.11 Additional data are needed before any changes can be recommended to the routine  use of NSAIDs for the management of postoperative pain and edema following implant placement. This may be important, especially when NSAIDs are used for more than seven days.

Drugs that interfere with bone cell interactions include some medications that exert beneficial effects on bone, including calcium channel blockers, bisphosphonates, monoclonal RANKL inhibitors (such as denosumab), sclerostin inhibitors, statins and antihistamines. The bisphosphonates and other antiresorptive medications require special attention due to the potential for developing medication-related osteonecrosis of the jaw.

Drugs that interfere with bone cell interactions also include agents that negatively affect bone. These include proton pump inhibitors (PPIs). Among the most commonly prescribed medications globally, PPIs are used in the prevention and treatment of gastrointestinal conditions, such as peptic ulcers and gastroesophageal reflux disease. These medications appear to negatively impact osseointegration and implant survival. In 2017, Wu et al10 noted patients taking PPIs had a higher risk of implant failure compared to those who did not use the drugs. One reason may be because PPIs decrease bone mineral density by affecting calcium homeostasis and impairing calcium absorption. Clinicians thus need to consider the role of PPIs when assessing an implant patient’s medical and medication history.

The following case reports represent two examples with regard to the age and physical health of the patient. The first case involves a young and healthy patient who was not taking any medications. The patient in the second case was older and presented with a more involved medical history. While no connection is being made between use of medications and the success of osseointegration in these patients, each case underscores the need to be cognizant of medication use. In light of emerging information, detailed assessment of medication history is advised, especially as science’s understanding of the role of various drugs in the long-term success of osseointegrated dental implants evolves.

Case Report 1: A 22-year-old Hispanic female with congenitally impacted lower right canine presented for treatment to replace the missing tooth. In reviewing her medical history, it was noted she was systemically healthy and did not take any prescription or over-the-counter medications. Her dental history included a protracted attempt at erupting the impacted canine that was finally abandoned and the tooth surgically extracted. The patient presented to the graduate clinic, as she was interested in an implant-supported restoration (Figure 1 through Figure 5). A CBCT was taken in the process of treatment planning. The plan included the placement of a 3.0×10-mm implant, along with augmentation of the site at the time of implant placement using freeze dried bone allograft and a resorbable membrane.

As of this writing, the patient is being seen for routine treatment that includes dental prophylaxis every six months to maintain her oral hygiene. Additional augmentation of the surgical site is planned to help plump out the facial aspect of the implant site.

Case Report 2: A 69-year-old Caucasian male presented to the graduate periodontology clinic interested in an implant-supported restoration to replace a missing upper left lateral incisor (Figure 6 through Figure 12). The patient’s medical history was reviewed thoroughly, along with a review of medication use. He reported being a former smoker who stopped about 40 years ago. The patient noted a history of osteoarthritis, and said he had a hip and knee replaced two years prior. His physician recommended premedication with 2 g of amoxicillin an hour before dental procedures. The patient also reported having taken oral steroids for two weeks for an ankle injury two years prior. Currently, he was taking NSAIDs as needed for pain in his ankle. On the day of surgery, his blood pressure was 142/81 mmHg.

A CBCT was taken and placement of the implant was planned digitally for a 3.3×10-mm, bone-level tapered device. At the time of implant placement, a buccal fenestration was noted upon the use of the pilot drill. Slight buccal pressure was applied on the handpiece to guide the drill palatally. No further fenestration was noted. The implant was placed through the guide. A composite bone graft was placed over the site, with a membrane placed over graft. Flaps were replaced and primary closure was achieved.

The focus of treatment planning and assessment of patients interested in implant-supported restorative treatment has primarily been on the acquisition of clinical and radiographic information. Yet with the increasing incidence of polypharmacy in the general population, more evidence coming to light that some medications may affect the osseointegration of dental implants and thus pose risk to successful outcomes. While the data are not definitive, implant providers are advised to carefully consider a patient’s medication history and possible impact on osseointegration. This information should be included in the pretreatment assessment and discussed with the patient when considering his or her best treatment options.

Featured image by DANIELZGOMBIC/ISTOCK/GETTY IMAGES PLUS

Ahmed Ibraheem, DDS, is a graduate student in the Department of Periodontology at Indiana University School of Dentistry in Indianapolis.

Chandni Batra, BDS, MDS, is a graduate student in the Department of Periodontology at Indiana University School of Dentistry.

Applications for 3D Printing in Dentistry 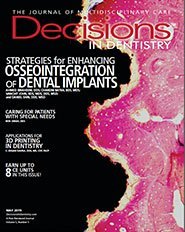