Relationship of Oral Pathogens to Pneumonia

A large percentage of dental practices have elderly patients whose home care is less than optimal.

A large percentage of dental practices have elderly patients whose home care is less than optimal. This can have serious consequences when these patients are hospitalized. Of particular concern are oral bacteria and their byproducts that are either aspirated or inadvertently introduced into the lungs during hospitalization, resulting in pneumonia.1 The pathogenesis can include aspiration of oral pathogens, such as periodontal disease-associated enzymes and cytokines that can modify mucosal surfaces, thereby allowing colonization of respiratory pathogens.

This problem has been labeled hospital-acquired pneumonia (HAP). Affecting hundreds of thousands of Americans each year, HAP has been defined as a positive respiratory culture seen after 48 hours following initial hospitalization.2 It has been estimated that treating these individuals costs more than $6 billion per year.3 This disease group accounts for the highest morbidity and mortality rates of any nosocomial infection. It is most often seen in aging smokers with heightened stress levels. The problem is also frequently found among individuals who receive endotracheal intubation or mechanical ventilation.

Early in this century, the U.S. Centers for Disease Control (CDC) recognized this problem. It suggested a rigid oral hygiene program for patients who are either going to be intubated or placed on a ventilator. The original instructions included vigorous toothbrushing every 12 hours and cleansing the mouth every four hours with a foam suction swab containing a prepackaged cleanser. The CDC also suggested use of a moisturizer on the lips and mouth every two to four hours.4 Using this approach, along with swabs of hydrogen peroxide and deep suctioning of the oral pharyngeal spaces, reduced HAP by 89.7%.2

Researchers in Argentina performed a study using a modification of this approach. Prior to surgery, 150 test patients were instructed in a protocol for oral decontamination. This included the modified Bass brushing technique, and the use of dental floss and interproximal brushes. In addition, partial dentures were cleaned as required, and the patients rinsed with 0.12% chlorhexidine gluconate every 12 hours for three days. The control group, also consisting of 150 subjects, received no such instructions. The test group had a lower instance of HAP and shorter hospital stays. In addition, there was a threefold higher incidence of pneumonia in the group not receiving oral hygiene instructions.5

These studies and others have confirmed the relationship between oral microbes and HAP. The findings suggest the dental profession has an ongoing responsibility to educate our patients, their families and our physician colleagues about the importance of personal oral hygiene. This can be particularly important for individuals who will undergo hospital stays that involve intubation or being placed on a ventilator.

Wealth Equates With Oral Health for Seniors, Too 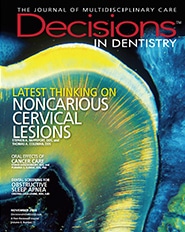