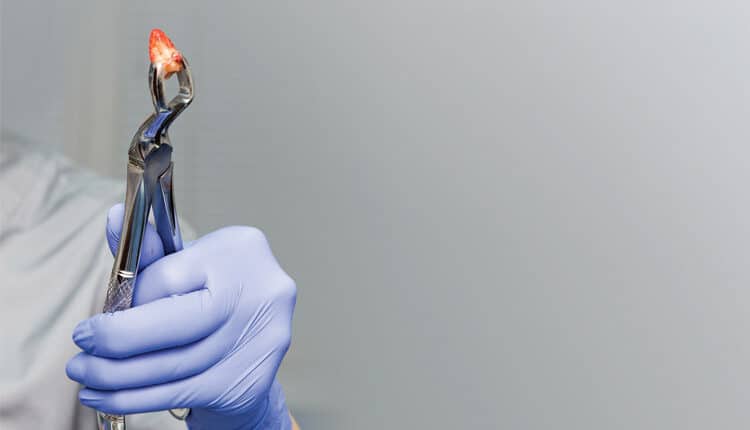 Orthodontic Extraction Therapy: A Hard Look At the Evidence

Lengthy debate has not brought about consensus on the role of extractions in orthodontic treatment.

The debate over whether extraction of dental units is appropriate in the execution of orthodontic treatment continues at a fevered pitch today, even though the profession has debated this for more than a century. Edward Angle,1 the father of orthodontics in the United States, used the following reason for eventually treating all his patients without the extraction of teeth: “To help Nature in overcoming her blunder of fashioning a small jaw for the reception of the full complement of well-developed teeth.”

Despite his wisdom and good intentions, Angle did not consider the issue of how to fit the dentition of his ideal occlusal model, Old Glory, an aboriginal skull, into a person not of aboriginal origin, and with a completely different skeletal pattern (Figure 1 and Figure 2).

Angle erroneously believed that Wolff’s law of bone arranging trabeculae in reaction to stress lines on the bone would result in teeth causing bone to grow around the roots were the teeth to be placed in proper Class I occlusion. He felt that ideal facial esthetics would result from accommodation of the complete dentition, and that extractions were not necessary for either esthetics or stability.

In the great “Extraction Debate of 1911” at the National Dental Association meeting, Calvin Case, another pioneer in American orthodontics, presented a paper defending the use of extractions in orthodontic treatment, and pointed to the role of heredity and local environmental factors in influencing the naturally occurring arrangement of teeth in humans. He was opposed in his argument by one of Angle’s former students, Martin Dewey, and, unfortunately, the non-extraction disciples prevailed.2 This led to a dominance of the non-extraction treatment philosophy in orthodontics for the next few decades in the period between World War I and World War II.

In 1940, Charles Tweed, one of Angle’s former students, famously presented 100 cases that he originally treated without extractions and later retreated with extractions because the non-extraction-modality results were not stable. In some cases, facial esthetics were lacking, as well. At about the same time, Raymond P. Begg, an orthodontist in Australia, also developed an extraction technique using the eponymously named Begg Appliance, whereby extractions were routinely done to achieve alignment of the permanent dentition. The pendulum swung toward extractions in the 1950s and 1960s. However, many patients were inappropriately treated with extractions that resulted in displeasing facial esthetics.

A revival of non-extraction treatment in orthodontics occurred from 1970 through the 1990s, with more emphasis on the face and less on the dentition. Publications by Little et al3 in 1981 and McReynolds and Little4 in 1991 demonstrated that extraction cases did not exhibit greater long-term stability than non-extraction cases. In addition, the advent of self-ligating bonded appliances further diminished the popularity of extractions in conjunction with orthodontic treatment.

DRIVING FACTORS IN THE CONTROVERSY

Facial esthetics has been one of the driving factors toward non-extraction treatment modalities. Patients poorly selected for extraction treatment can end up with the characteristic “dished-in” face, meaning, the profile of the lips is flattened due to diminished incisor support. This is a real issue. However, when orthodontic problems are appropriately treated with extractions based on an accurate diagnosis and treatment plan, along with well-executed treatment mechanics, there is no damage to the profile.

Another driving factor in the decline in popularity of extractions in conjunction with orthodontic therapy is the issue of sleep apnea and its relationship to the space available in the oral cavity for resting tongue posture. Never has dentistry been more aware of the positioning of the jaws and dentition and their role in obstructive sleep apnea than the present. This begs the question: Does extraction of teeth in conjunction with orthodontic therapy always diminish the intraoral volume and contribute to sleep apnea?

There are many factors other than intraoral volume that contribute to the development of obstructive sleep apnea; these include weight, neck girth, tonicity of intraoral and circumpharyngeal musculature, nasal cavity volume, gender (with a male propensity), family history, age, smoking history, use of alcohol, sedatives or tranquilizers, and systemic medical conditions. A study by Valathian et al8 found no statistically significant differences between oropharyngeal airway volume in patients treated with four bicuspid extractions and the matched untreated group. Zhang et al9 discovered no significant differences between a matched control group of patients and a group of adult Class II patients (n = 20) with hyperdivergent skeletal patterns (ANB > 4.7°, SN-MP > 37°), 4 to 7 mm of crowding, and significant uprighting of the maxillary and mandibular incisors. The changes in airway volume, height and cross-sectional area after orthodontic extraction treatment were not significant when compared to controls. There was an anterior-posterior reduction in airway dimensions in the middle and inferior aspects of the airway, but the study also determined the transverse dimension of the airway increased as the anterior-posterior dimension was slightly diminished.

There is evidence of diminution of airway volume following extractions10,11 but no correlation noted between the decrease in airway volume and sleep apnea. The amount of incisor retraction appears to be related to the diminution of airway volume. Most of the evidence for the relationship between sleep apnea and orthodontic extractions primarily involves cross-sectional studies and uncontrolled longitudinal studies. So, is there high-quality evidence to support the belief that extraction of teeth for the purpose of orthodontic alignment leads to sleep apnea?

Hu et al11 performed a systematic review of the literature in this regard and reached the following conclusion: “Currently, it is difficult to draw evidence-based conclusions because of the exceeding heterogeneity among included studies; more qualified trials are required to provide reliable evidence.” Extractions followed by large retractions of the anterior teeth in bimaxillary protrusion cases could possibly lead to a narrowing of the upper airway. Mesial movement of the molars (as occurs in extraction cases without temporary anchorage devices or absolute anchorage) appeared to increase the posterior space for the tongue and enlarge upper airway dimensions.

Although the effect of tooth extraction on upper airway dimension seems to be related to indications for extraction, accepted scientific evidence is still insufficient owing to the limited number of studies in Hu et al’s11 systematic review. The relationship between upper airway size and respiratory function has not been demonstrated. While there may be a decrease in airway volume, there is no evidence that would make an airway more collapsible. None of the studies in this review had actual functional assessment of breathing.11

In yet another study to tie the presence of extractions in orthodontic treatment to development of obstructive sleep apnea later in life, a retrospective review of 5584 patients (half had not undergone premolar extractions, and half had four bicuspid extraction) who were matched for age, gender and body mass index, the orthodontically treated group showed that 299 (10.10%) of the group treated with extractions eventually had sleep apnea in some form, and 267 (9.56%) of the untreated group eventually developed sleep apnea. The difference between the groups was not statistically significant.12

Another phenomenon associated with extraction orthodontics is the appearance of unattractive dark buccal corridors. There is a misconception among both general practitioners and orthodontists that extraction treatment yields unequivocally to a narrow smile and dark buccal corridors. Some practitioners are so disturbed by this idea they have adopted a “one size fits all” philosophy — that is, very broad arches can fit in every human head and, thus, there is no need for extractions. This is akin to stating that one tire size fits all vehicles.

A study by Roden-Johnson et al13 examined the effects of buccal corridor spaces and arch form on smile esthetics. Laypersons demonstrated no preference of narrow versus broader arch forms in the evaluation of smile esthetics, but orthodontists and general dentists both preferred broader arch forms compared to untreated arch forms. The study’s conclusion noted the presence of buccal corridor spaces does not significantly influence smile esthetics, but there are small differences in preferences between laypersons, general dentists and orthodontists.

The belief that extraction orthodontics can lead to temporomandibular dysfunction also warrants examination. Is there a correlation between extraction orthodontics and the creation of a temporomandibular joint (TMJ) issue? The landmark court case for this concern arose in 1987 with Brimm v. Malloy. In this case, a 16-year-old female was treated by an orthodontist who prescribed four bicuspid extraction therapy, use of a headgear for anchorage, and fixed edgewise appliances. She eventually developed temporomandibular disorder, and the orthodontist was sued for causing the TMJ issues. The patient’s family prevailed in the lawsuit. By the early 1990s, research15 had debunked this belief — but the concern still prevails today: Will prescribing extraction treatment subject the provider to liability if the patient eventually develops a TMJ condition?

Patient autonomy (i.e., the ability to participate in treatment decisions) is appropriate and a part of all treatment rendered in the current healthcare climate. It is one of four cornerstones of medical ethics. It is always appropriate for patients to participate in decisions affecting their health. However, all information in the virtual world with which patients have access is not necessarily high-quality evidence either in support of, or opposition to, a treatment modality. In the author’s estimation, if a provider disagrees with a patient’s decision regarding a treatment modality and there is risk for harm, the provider should simply refuse to treat (with the rare exception of a true emergency) and refer the patient to another provider.

There exist claims by both practitioners and manufacturers that their orthodontic appliances “work differently” from more conventional appliances, and the biologic response to their treatments are quite different. They claim the alveolar bone, both medullary and cortical, can distinguish between the forces applied through these appliance systems, as opposed to more traditional fixed appliances. They further assert the biological response of the body will be different in these cases. There are also groups of practitioners, many who are not orthodontists, claiming their appliances can stimulate bone growth in non-growing patients. They advocate that all existing extraction sites should be reopened to reestablish oral form, function and esthetics. Figure 20 and Figure 21 illustrate bony dehiscence resulting from moving the roots of the maxillary incisors through the cortical plate attempting to manage the orthodontic treatment in a non-extraction modality.

One of the leading proponents of non-extraction therapy in all situations is quoted as follows: “We must not allow the present popularity of evidence-based orthodontics to bind us to obvious constant relationships.”17 Unfortunately, after 100-plus years, the debate continues regarding the appropriateness of extractions in orthodontic therapy, and this topic draws sharply divided opinions. To large degree, it appears one is either on the side of extractions, or completely against them — with no middle ground. Perhaps the controversy is best summed up by renowned orthodontic educator, researcher and clinician Lysle Johnston,18 who remarked about the wave of non-extraction advocates, “In the meantime, it’s the uncritical selling the unlikely to the unknowing.” And that does not speak well for us as providers.

Ricky E. Harrell, DMD, MA, is program director at the Georgia School of Orthodontics in Atlanta. A diplomate of the American Board of Orthodontics, he sits on Decisions in Dentistry’s Editorial Advisory Board. He can be reached at [email protected]. 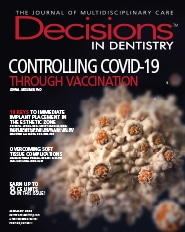