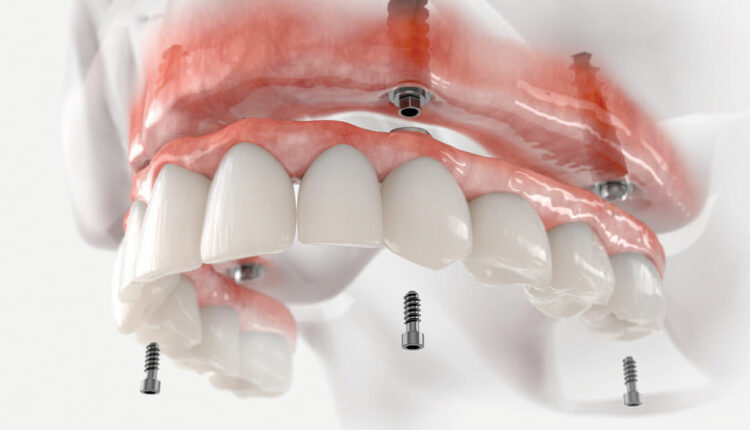 Importance of Records and Occlusion in Advanced Implant Prosthodontics

Dental implants have become a common therapeutic option, and, as their use has grown, so has the complexity of techniques used to restore them. Implants are being used for a variety of indications, such as single tooth replacements, locators to retain protheses, and full-arch, fixed implant-supported dentures. While implants have great versatility, it is important to remember that prosthetic concepts in dentistry become critical in the restoration of advanced implant prosthetics — especially the concept of occlusion. While there is no consensus on a superior occlusal scheme, the most commonly accepted occlusal schemes for complete-arch, implant-supported fixed dentures (henceforth referred to as hybrids) are mutually protected occlusion and balanced occlusion.1,2 The same can be said for metal acrylic hybrids versus zirconia hybrids.

Each has distinct advantages and disadvantages. Zirconia has a lower incidence of prosthetic complications when compared to metal acrylic hybrids.3 The chief complication with metal acrylic hybrids is posterior wear on the prosthesis, while zirconia and porcelain-veneered zirconias present a higher incidence of wear and chipping of opposing natural dentition.3 While there may be no consensus on the superior material, it is the authors’ opinion that metal acrylic hybrids offer the advantage of being kinder to natural dentition.3–5 In addition, they can be “retreaded.”4 This case report discusses a situation in which improper records were made during initial fabrication of a fixed implant-supported denture (hybrid), and how these factors led to premature failure of the prothesis. It also highlights a benefit of an acrylic with titanium bar substructure hybrid, as compared to a zirconia or porcelain-fused-to-metal (PFM) hybrid.4

A 67-year-old male presented to the university clinic for evaluation of his maxillary acrylic hybrid after he had fractured the maxillary right central incisor out of the prosthesis and glued it back in place (Figure 1). The patient’s medical history was reviewed. He presented with well-controlled hypertension, no known drug allergies, and a noncontributory social history. Head and neck examination findings were all within normal limits. An intraoral examination demonstrated an uneven occlusal plane and accelerated wear on the denture teeth, as well as wear and improper occlusion on the patient’s 3-year-old mandibular removable partial denture — which demonstrated a lack of any occlusal scheme, and uneven distribution and intensity of occlusal contacts.

A review of the patient’s dental history revealed he had a recurrent issue of fracturing different teeth out of the maxillary hybrid prothesis since its delivery two years prior. Options for repair or a new prosthesis were presented to the patient. A third option for “retreading” was discussed due to the fact the hybrid was an acrylic-based denture with a well-fitted titanium bar substructure. The advantages of this approach were that it cost significantly less than the first two options, and it allowed a quicker turnaround. The patient accepted this option and signed the treatment plan. After facebow centric relation bite records were obtained using bimanual manipulation,6 the patient’s protrusive bite registration was recorded.

The hybrid prosthesis was removed and the intaglio surface lined with polyvinyl siloxane adhesive, followed by use of light-body polyvinyl siloxane to obtain an impression of the soft tissue surrounding the implants (Figure 2). An impression of the mandibular arch with the patient’s removable partial denture in place was made using irreversible hydrocolloid material. The patients’ previous complete-arch, implant-supported interim denture (which had been saved) was placed and worn during fabrication of his new prosthesis.

The maxillary hybrid’s titanium substructure bar was still in good condition. The bar fit passively intraorally on all of the multiunit abutments, and passed the Sheffield test (also known as the one-screw test).7 Multiunit analogs were then attached to the prothesis and the appliance was bead-and-boxed, similar to a denture final impression. The result was a verified master cast that was mounted using the previously obtained records on a semi-adjustable articulator (Figure 3). A burn out was performed to remove the acrylic from the bar substructure. The bar was reattached to the master cast and wax was added around the bar to perform a new teeth setup. To correct the occlusal discrepancy, the mandibular cast was waxed to a 20-degree template (Figure 4 and Figure 5) and the maxillary denture teeth set at this new occlusal plane.

At the try-in appointment, the patient’s complete-arch, implant-supported interim denture was removed, and the new setup that had been fabricated on the original bar substructure was screwed in place for esthetic and phonetic evaluation. The patient was satisfied with the results (Figure 6). A new centric relation record was obtained, and the mounting verified.

At this point, the patient agreed to surrender his mandibular prosthesis so the clinical team could reprocess it with new denture teeth. A pickup impression of the mandibular prosthesis was made using an irreversible colloid material (Figure 7). Bite registration polyvinyl siloxane was placed in the intaglio surface of the saddle areas of the removable prosthesis to ensure it did not lock onto the cast after being poured (Figure 8). The denture teeth were removed with a lab round bur, and a new set of teeth mold PL-4 were reprocessed into the saddle area base (Figure 9).

After processing of both prostheses was completed and excess acrylic was removed, the appliances were polished (Figure 10 and Figure 11). Both prostheses were delivered using pressure-indicating paste to ensure there were no pressure points binding on the intaglio surface. Full seating of the hybrid prosthesis was verified with periapical radiographs. Multiunit screws were inserted and torqued to 15 Ncm. Next, occlusion was checked and adjusted to achieve a balanced occlusion with minimal vertical overlap. This occlusal scheme allows the dentures to work in unison and helps avoid future tooth fracture on the prostheses. Postoperative photographs were obtained after delivery, at which time the prostheses presented a natural and esthetically pleasing appearance (Figure 12).

This case highlights why the occlusion on complex restorative cases is crucial to successful long-term outcomes. In the case presented in this report, the protheses were failing months after delivery chiefly due to improper records that led the laboratory technician to set the teeth at an improper occlusal relationship. While there is no consensus for an individual occlusal scheme for a hybrid prosthesis,1,2 this patient’s occlusal scheme was closer to that of natural dentition. The patient’s vertical overlap and lack of shared protrusive and excursive contacts were causing accelerated wear, as they were not evenly distributed.

The desired occlusion is a balanced setup that allows for dispersion of forces across the prosthesis during function. An esthetic result was an important aspect of the occlusal scheme for this patient, and while a nonbalanced lingualized occlusion would also protect the prosthesis, it is less esthetic than a balanced occlusion. Achieving an accurate facebow and centric relation record allowed for correct mounting, resulting in the proper occlusal setup.7

Compared to a zirconia or PFM hybrid, another benefit of acrylic-based, implant-supported dentures with titanium bar substructure is they absorb the damage from improper occlusion (as opposed to it being delivered to the natural dentition when zirconia or PFM hybrids are used). The authors suggest this prosthetic design is kinder to natural dentition;3–5 it is also lighter and allows for easier repair without fabricating a completely new hybrid — which is something to consider during the decision-making process.

When designing complex, implant-supported prostheses such as hybrids, it is important to obtain accurate records and a mounted cast to allow for proper laboratory procedures and outcomes. In these cases, it is the authors’ opinion that acrylic-based, metal bar substructure hybrids are worth considering due to ease of repair and the possibility of being retreaded.

Thomas Blackwell, DMD, is a resident in the advanced education in general dentistry program at the Dental College of Georgia at Augusta University in Augusta.

Mario F. Romero, DDS, is an associate professor in the Department of Restorative Sciences and director of the advanced education in general dentistry program at the Dental College of Georgia at Augusta University. Romero maintained a private practice for 15 years prior to joining the university in 2013. He can be reached at [email protected].

Kurt Metzler, MS, DDS, is an assistant professor in the Department of Restorative Sciences at the Dental College of Georgia at Augusta University. He also maintains a prosthodontics practice with a special emphasis on implant-based treatments in coordination with surgical specialists.