Screening in oral health care settings can help save the lives of patients with suicidal thoughts.

By Marlene Storz, MSDH, RDH and Eric D. Bothwell, DDS, MPH, MA, PhD On Jun 1, 2016
0
Share
Screening in oral health care settings can help save the lives of patients with suicidal thoughts
PURCHASE COURSE
This course was published in the June 2016 issue and expires 06/30/19. The authors have no commercial conflicts of interest to disclose. This 2 credit hour self-study activity is electronically mediated.

During the routine provision of care, the assessment phase of observing patients, reviewing health histories, determining vital signs, and completing an oral cancer screening provides an opportunity for oral health professionals to identify risk factors associated with self-injury or suicide. This type of screening is consistent with identifying risk factors associated with other common causes of death in the United States, including diabetes and cardiovascular disease (Table 1).1 Research has demonstrated that a large proportion of individuals who die by suicide communicate their suicidal thoughts or intent to someone before the fatal act.2,3 By learning to identify the signs of suicide during office visits, dental teams can work with primary care providers, mental health professionals, and local and national resource groups to forge partnerships to address this preventable public health problem.4

An estimated 804,000 deaths from suicide occurred globally in 2012, and, in 2013, suicide was the 10th leading cause of death in the United States.1,4 The U.S. Surgeon General’s National Strategy for Suicide Prevention specifies that for each individual whose life ends in suicide, 30 others attempt it.5 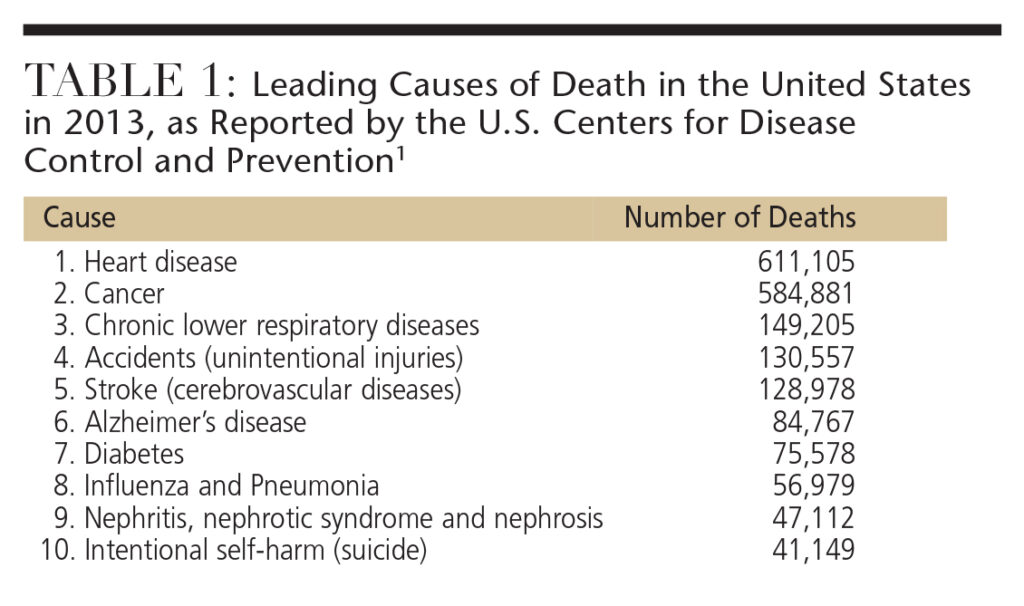 Race and ethnicity are tied to suicide risk. Compared with other ethnic groups, American Indians and Alaskan Natives have the highest rates of suicide. Suicide is the second leading cause of death among American Indians/Alaskan Natives ages 10 to 34. Hispanics are also at increased risk of suicide. Among Hispanic students ages 14 to 18, the rates of seriously considering a suicide attempt, making plans to attempt suicide, and attempting suicide were higher than for whites and blacks.6

Suicide has a tremendous impact on society and survivors. According to the U.S. Centers for Disease Control and Prevention, medical and work-loss costs related to suicide are estimated at $44.6 billion per year.7 When an individual attempts or achieves suicide, his or her friends, family, acquaintances and coworkers are also affected. Survivors are at increased risk of suicide themselves.7,8 They may experience feelings of guilt, anger, abandonment, denial, helplessness and shock.7,9,10

A previous suicide attempt is a major risk factor.4 During clinical examinations, dental professionals can look for unexplained cuts, scratches, bruises or burns on the body — particularly on the wrist and forearms. Other questionable signs include traumatic gingival lesions not consistent with dental health or occlusion, unexplained loss of teeth, and signs of pulling hair or removing eyelashes. These may signal that a patient is self-injurious.11

During the health history review, risk factors — such as alcohol abuse, mental health disorders and chronic pain — can be identified.4 Depression, which is a significant risk factor for suicide, may also be discovered during the health interview. It should be noted, however, that patients might not have received a diagnosis or list depression on their health history forms.

Clinical depression is one of the most common mental health disorders. Its impact on society may be underestimated due to the fact that depression often accompanies other medical problems — increasing the likelihood that it will be downplayed or overlooked.12 Mental health professionals in the U.S. use the standard classification of mental disorders from the American Psychiatric Association’s Diagnostic and Statistical Manual of Mental Disorders, Fifth Edition (DSM-5). The diagnostic criteria for severe depression are met when at least five of the following are present most of the day, nearly every day, for a minimum of two weeks:12 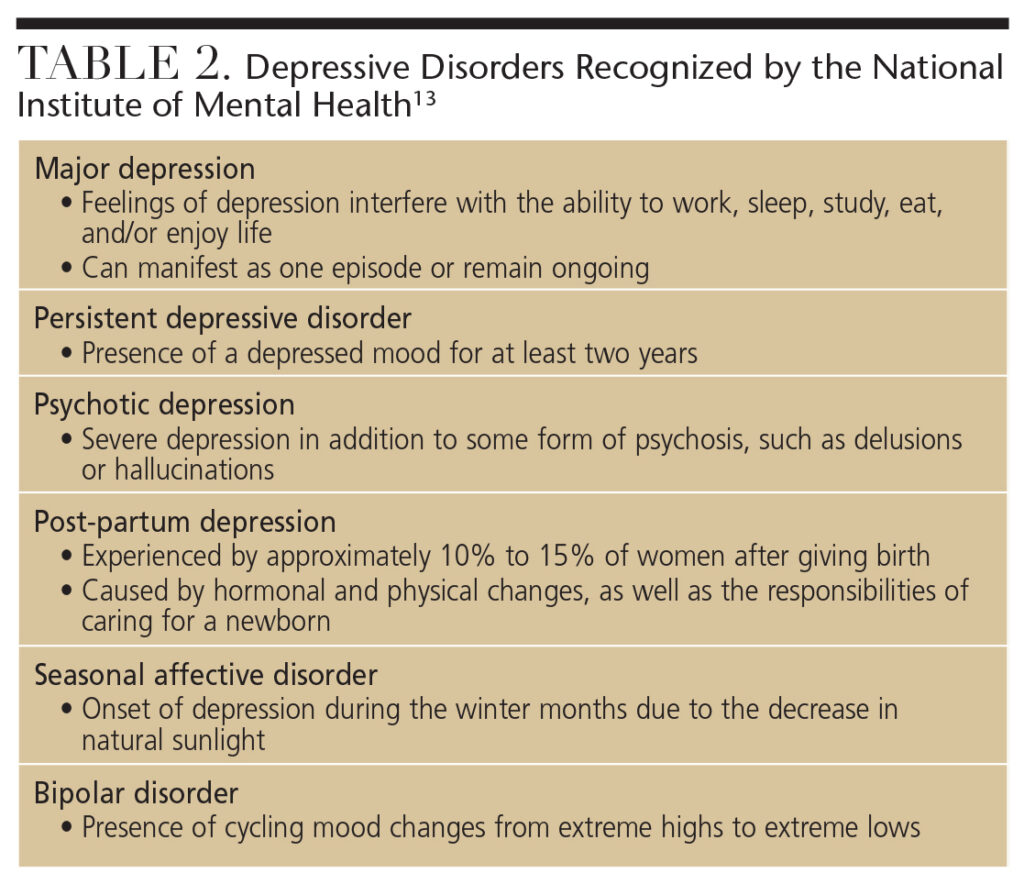 A patient’s social history may also provide clues for increased suicide risk. Individuals who have experienced discrimination, isolation, abuse, violence, conflictual relationships, financial problems, loss of a friend or family member to suicide, military service (past or present), or psychological stress may be at increased risk.4 By recognizing risk factors, clinicians can encourage patients to seek treatment or support from mental health professionals so that further suicide prevention strategies can be implemented.

Receiving additional training on suicide prevention may be helpful for nonmental health professionals, including oral health care providers. The Substance Abuse and Mental Health Services Administration supports the Suicide Prevention Resource Center (sprc.org/bpr).14 The center provides a list of evidence-based programs for suicide intervention training and/or certification. Table 3 also lists some of the education and training programs that can help dental professionals further identify, review and disseminate information about best practices in suicide prevention. This type of training provides participants with the ability to recognize the warning signs of suicide, questions to help assess an individual’s status, techniques to persuade the patient to seek help, and appropriate referrals to mental health professionals.15 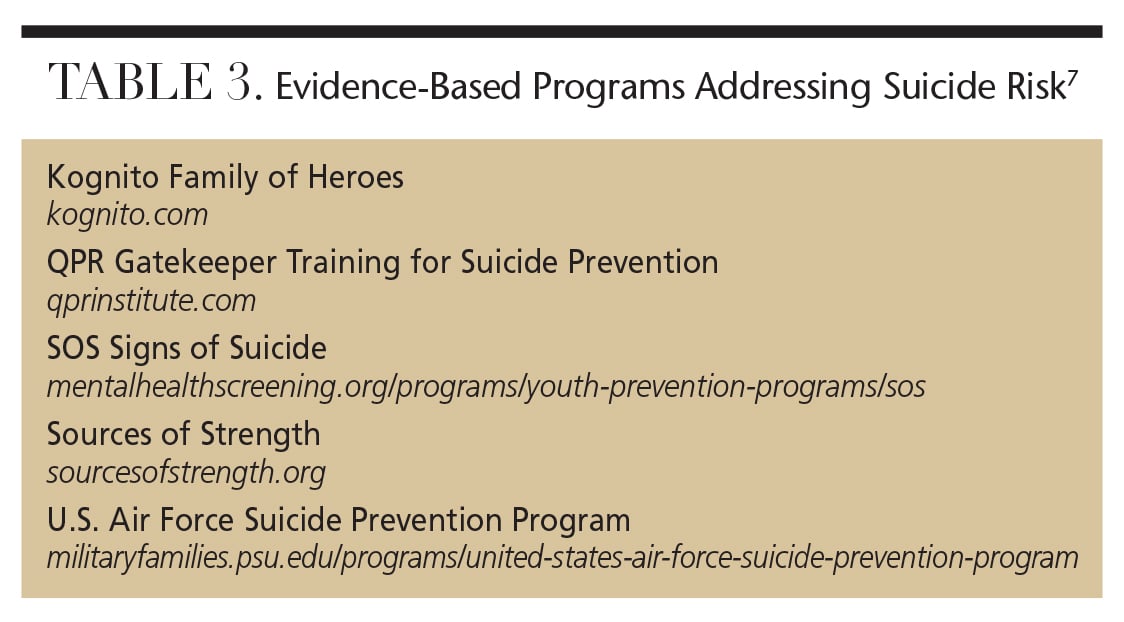 The warning signs of suicide should elicit a response similar to when a patient advises the clinician that he or she has a history of rheumatic heart disease, which, of course, changes the protocol for patient management immediately. The rule of thumb for suicide gatekeepers is if there is any doubt whether a patient is potentially suicidal, the patient should be questioned to clarify his or her intent. While taking this step may be uncomfortable for both parties, oral health professionals can effectively question the patient (either directly or indirectly) to better assess the patient’s risk status. (See the sample conversation at lower left.)

If the patient’s responses satisfy the clinician that the individual is not at serious risk for suicide, the intervention is complete. On the other hand, if the patient’s answers strengthen the concern or confirm a suicidal intent, the clinician needs to empathetically attempt to persuade the individual to seek help and not give up hope. Growing evidence supports the positive effects of showing concern, caring and offering hope by asking, listening and encouraging individuals to seek help.16 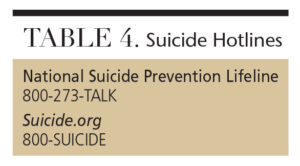 Oral health professionals should have a prescreened network of mental health providers who will promptly accept referrals for those identified as at risk of suicide. In fact, developing a mental health support network is essential for any dental practice that’s committed to suicide prevention. While building a network can be challenging, a good start is to conduct a search of the mental health services and social services located in the vicinity of the practice. Al­though hotlines (such as those noted in Table 4) are not ideal referrals, they may be able to avert a crisis until face-to-face support is arranged. For at-risk dental patients younger than 18, clinicians must notify parents/caregivers of suicidal concerns. For adults, asking a patient’s permission to share the need for mental health referral with family members or friends is important — but if the patient does not agree, ensuring that he or she will accept such a referral is critical.

Even when dental providers develop a strong referral network, many at-risk individuals will still need assistance and follow-up to ensure they connect with mental health professionals. If the patient rejects the referral and suicidal intentions appear imminent, calling an emergency mental health unit for an evaluation may be justified.

The details of a suicide intervention occurring in the private-practice setting should be documented in the patient’s record. This not only provides an accurate record of care, but this is also important when following up. Documentation of the intervention should include the nature of the identified risk, referral sources recommended, and follow-up instructions. Personal follow-up and continuity of care supports adherence to the suicide prevention program, which can be a powerful tool in preventing suicide attempts and deaths.17

A35-year-old married man who has been receiving care in the dental practice for at least 10 years discloses to the dental assistant that he is going through an unwanted divorce. A police officer, he admits that after he slapped his wife in an argument, his department is conducting an investigation into a possible domestic violence charge. He may lose his job. The patient seems tearful, but controls himself.

At the end of the procedure, he says, “Tell Dr. Smith that he has been terrific to me. I’m heading up to my cabin one more time.”

Dental assistant: “What you said concerns me, and I am worried for your safety. Given what you are going through, you sound pretty hopeless.”

Patient: “Wouldn’t you be?”

Dental assistant: “Probably. Sometimes, when people feel hopeless, they also have thoughts of suicide. Have you had any of those?”

Dental assistant: “We have some excellent people on hand who could talk to you about what you’re going through. Would you like me to call one of them? I can do it right now.”

Patient: “I guess that would be OK.”

The provision of oral care provides an opportunity to build partnerships. This patient and clinician partnership can be strengthened by the practitioner’s investment in the patient’s overall health — including oral, physical and mental health. Dental providers can expand their interprofessional collaborations to include mental health professionals. By learning to recognize risk factors associated with suicide, and completing training in suicide prevention programs, dental teams can construct an office protocol for use when suicide risk is detected. With these tools in place — and with the support of local mental health resource network — the office is prepared to respond appropriately to the signs of suicidal thoughts or self-injury.

Together, these skills and protocols will enable dental professionals to screen for suicide risk during the provision of care, with the ultimate goal of saving lives that might otherwise be lost to this preventable cause of death.

Marlene Storz, MSDH, RDH, is an assistant professor in the dental hygiene program at the University of the Pacific, Arthur A. Dugoni School of Dentistry in San Francisco. Storz’s interest in suicide prevention led her to become certified as a gatekeeper instructor by the QPR Institute, which provides suicide prevention training programs to oral health professionals. Storz can be reached at [email protected]

Eric D. Bothwell, DDS, MPH, MA, PhD, is a public health advisor for the Men’s Health Network, an educational organization that works to resolve issues affecting men’s health. He also teaches at the College of Public Health, University of Florida in Gainesville. Bothwell is a certified QPR gatekeeper instructor.

The Secret to Professional Longevity