Gingival Bleeding May Indicate a Need for More Vitamin C

A study out of the University of Washington School of Dentistry suggests patients who experience gingival bleeding may have a vitamin C deficiency.

A study out of the University of Washington School of Dentistry suggests patients who experience gingival bleeding may have a vitamin C deficiency. The paper, “Bleeding Tendency and Ascorbic Acid Requirements: Systematic Review and Meta-analysis of Clinical Trials,” appeared in Nutrition Reviews. After analyzing data from 15 clinical trials in six countries involving 1140 predominantly healthy participants, as well as data from 8210 Americans surveyed in the U.S. Centers for Disease Control and Prevention’s Nutrition Examination Survey, investigators found that bleeding on gentle probing or gingival bleeding tendency, and bleeding in the eye or retinal hemorrhaging, were associated with low vitamin C levels. Additionally, researchers report that bleeding issues were reversed when people with low vitamin C plasma levels increased their daily intake of the nutrient. The findings suggest current vitamin C intake recommendations may be too low. 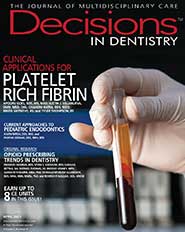