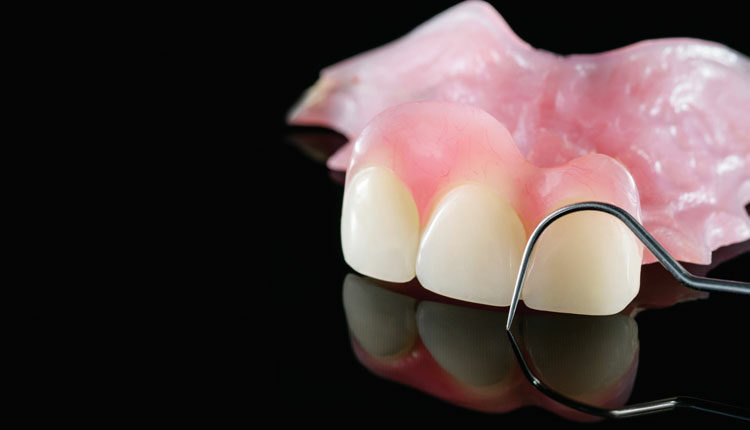 This case study of a patient with cleft lip and palate demonstrates a simple method to provide anterior esthetics and maxillomandibular fixation while healing after orthognathic surgery.

The model surgery and fabrication of the preoperative surgical splint has been a gold standard procedure in orthognathic surgery. The cast surgery has two main goals. First, to verify that the planned three-dimensional (3D) movements are feasible. Second, to relate the cast in the position where the occlusal splint for the surgery will be made. At this stage, coordination between the orthodontist and surgeon is critical — and, in patients with multiple missing teeth or who are completely edentulous, the prosthodontist plays an important role, as well. This article will present a simple method to provide the desired anterior esthetics and required maxillomandibular fixation during the healing period following orthognathic surgery, as well as surgical site protection after a fistula closure procedure.

The number of remaining teeth will determine how the splint is fabricated. The situation becomes more complex if the patient is either anodontic or partially edentulous. If the patient has multiple teeth present, the device can be made according to the specific needs of the individual. In completely edentulous patients, removable complete dentures are used as the foundation to retain the postsurgical splint. This stent can be fabricated for the maxillary or mandibular arch, depending on the type of surgery and needs of the specific case.1

The use of surgical stents is based on findings from a clinical analysis and preparation by the clinician, using tools such as maxillomandibular record bases and occlusion rims, articulator mounting, and cephalometric analysis.2 Today, there are various ways to fabricate the splint, including conventional manual fabrication or production via computer-assisted procedures. Both techniques are accepted, and research demonstrates the digital surgical guide technique achieves similar levels of accuracy when compared with the conventional facebow and model surgery technique.3

Surgical splints can be used in various orthognathic procedures, including one- or two-jaw surgeries, multisegmented surgery, and surgical correction from traumatic injury. The stent provides stability by holding the maxillomandibular apparatus in the correct position during the healing process, which usually takes four to six weeks.1

In cases of multipiece maxillary surgery, the occlusal splint will form the maxillary arch, holding the segments in the preplanned surgical position. Some corrections have a higher incidence of relapse than others. For example, surgical maxillary expansion has been reported as having greater potential for relapse than some techniques. This procedure demands use of a splint after surgery to help stabilize the expansion planned by the surgeon and orthodontist.4 Others have reported using a splint-less approach in cases of double-jaw orthognathic surgery by allowing the postsurgical fixation through the use of 3D-printed, custom titanium fixation plates. This would allow use of an interim partial denture relatively soon after the surgery; however, additional research is needed in this area.5 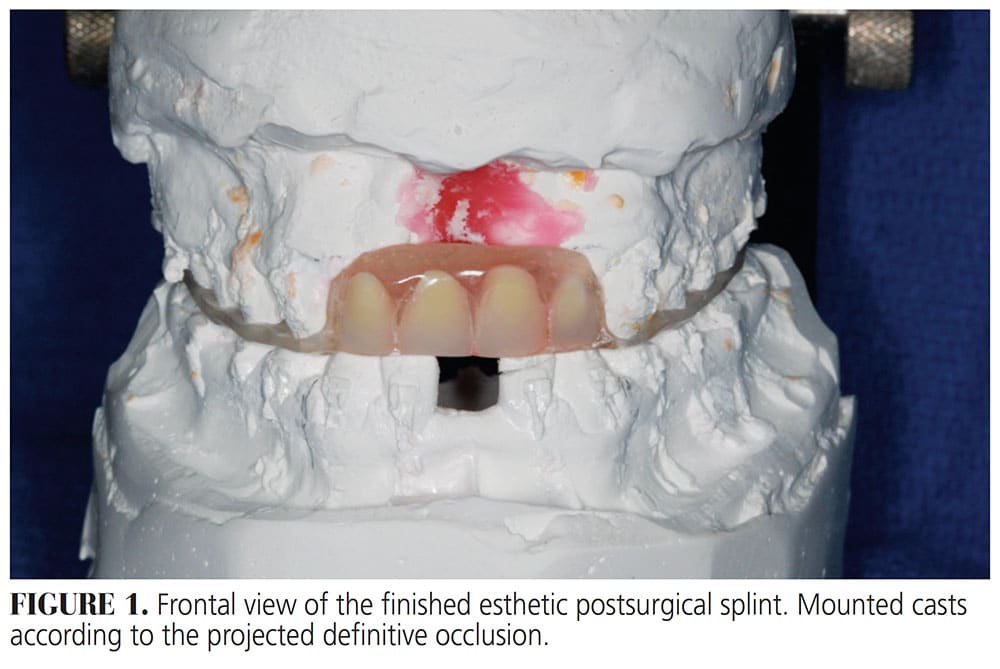 Patients With Cleft Lip and Palate

Patients with cleft lip and palate often undergo orthognathic surgery that must be planned via conventional model surgery or virtual surgical planning.6 A postsurgical splint is required for four to eight weeks (depending on the protocol of the maxillofacial surgeon) following the procedure.7 In other cases, a palatal splint would be placed after a palatal fistula repair.2,8 In either situation, the esthetic aspect is compromised because the patient is usually partially edentulous in the anterior maxilla. Self-esteem is also affected, especially in cases that have been in treatment for several years.9 During orthodontic treatment, pontics are attached to the wire, or an interim removable partial denture is used for esthetic purposes. However, the challenge presents when the partially edentulous patient must use the postsurgical splint, but is unable to use the interim partial denture during the fixation period.

This article includes a case presentation involving a patient with cleft lip and palate. As noted, it describes a simple method to provide anterior esthetics and maxillomandibular fixation during the healing time after orthognathic surgery, or surgical site protection after fistula closure.

A 13-year-old male with complete bilateral cleft lip and palate and missing premaxilla of uncertain etiology presented for treatment. The patient underwent maxillary expansion and fixed appliance orthodontic therapy, in combination with an interim maxillary partial denture that was used throughout treatment for esthetic reasons. Orthodontic treatment prepared the patient for an asymmetric two-piece maxillary advancement, in combination with an iliac crest bone graft on the anterior maxilla. The patient wore the splint for eight weeks after orthognathic surgery.

The first step in splint fabrication consisted of obtaining diagnostic records. This can be accomplished by making maxillary and mandibular impressions using irreversible hydrocolloid or polyvinyl siloxane impression materials, or by performing intraoral digital scanning of both arches. Either method will facilitate the fabrication of maxillary and mandibular casts, which can be mounted on an articulator. The maxillary cast was mounted utilizing a facebow transfer record, and the mandibular cast was articulated by using the projected occlusal relationship. At this point, the clinician was able to perform model surgery (routinely accomplished by reproducing the intended surgery on the mounted casts).

Next, the cleft area on the maxillary cast was blocked out using baseplate wax. The clinician arranged the denture teeth on the edentulous ridge, using the adjacent dentition as reference for tooth position and esthetics. Once the teeth were in the ideal position, petroleum jelly was applied to the palate and maxillary natural teeth. This prevented attachment of the auto-polymerizing acrylic resin to the surfaces of the cast, and facilitated the removal of the splint once completed. 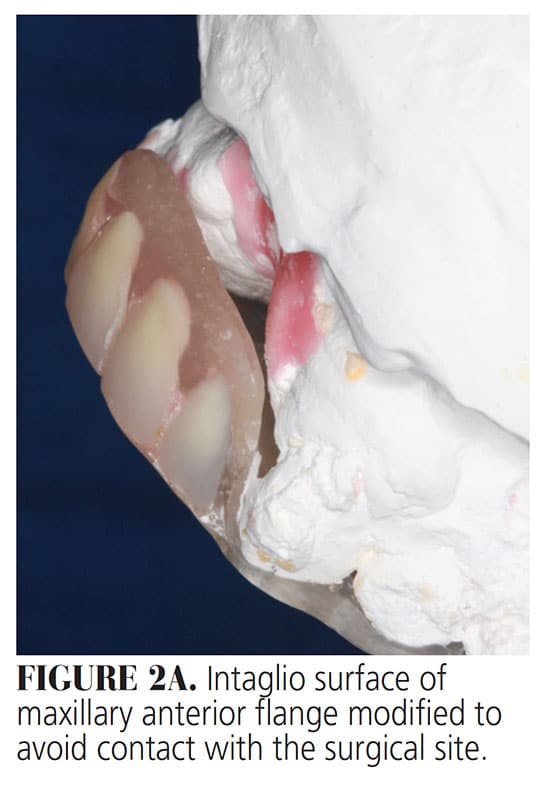 In a plastic cup, polymer powder and methyl methacrylate resin liquid monomer were mixed to a thick consistency. Once the mixture had achieved a doughy consistency, a roll was formed and molded over the incisal/occlusal and palatal surfaces of the natural teeth, lingual and cervical surfaces of the denture teeth, and palatal surface of the maxillary arch. After the resin had polymerized, the splint was removed from the cast and trimmed to proper contours (Figure 1). On the buccal surfaces, only the incisal/occlusal third of the maxillary teeth were covered. If the splint is used to stabilize the maxillomandibular apparatus after orthognathic surgery, it does not necessarily need to cover the palate. However, if it is used after a surgical fistula repair, it should cover the palatal vault. This also facilitates stabilization of the splint, provides additional retention, and protects the surgical site. In either case, the appliance should allow adequate access to the teeth for proper hygiene during the postoperative period. The labial flange of the splint may need to be adjusted on the intaglio surface to avoid contact with the surgical area (Figure 2A).

Once the proper contours had been formed, the clinician created small perforations on the interproximal areas of the buccal extension of the appliance. This will allow the use of wires for splinting during the postsurgical period (Figure 2B).

The addition of denture teeth to the postsurgical splint did not interfere with healing of the surgical site and addressed patient concerns in regard to anterior esthetics during the healing process.

In patients with cleft lip and palate, the combination of orthodontic treatment and orthognathic surgery is a common clinical approach. The maxillomandibular discrepancies in these patients are usually extensive. In many cases, orthodontic treatment alone or combined with prosthodontic treatment is not enough to correct such large defects. The significance of the technique presented in this report is that it offers an easy, practical, inexpensive and effective short-term solution with a suitable esthetic result, even though the individual is partially edentulous in the anterior maxilla and unable to wear the interim partial denture during the postsurgical healing period.

Facial esthetics with anterior tooth replacement are important for the psychosocial development of patients with cleft lip and palate, who are usually introverted.10,11 In this case, the patient was extremely anxious about not having anterior teeth after the orthognathic surgery and during the healing process. However, the esthetic postsurgical splint helped ease this concern without affecting the surgical outcome.

The case presented in this technique report was done using the conventional method with model surgery and autopolymerizing acrylic resin. The patient was satisfied with the results and grateful for receiving a provisional restoration. However, the virtual surgical planning performed on a virtual model — resulting from a cone beam computed tomography scan of the patient, with 3D scanning of the dental arch and superimposition of the soft tissue profile — permits setting the position of both maxilla and mandible, without the need for laboratory work. 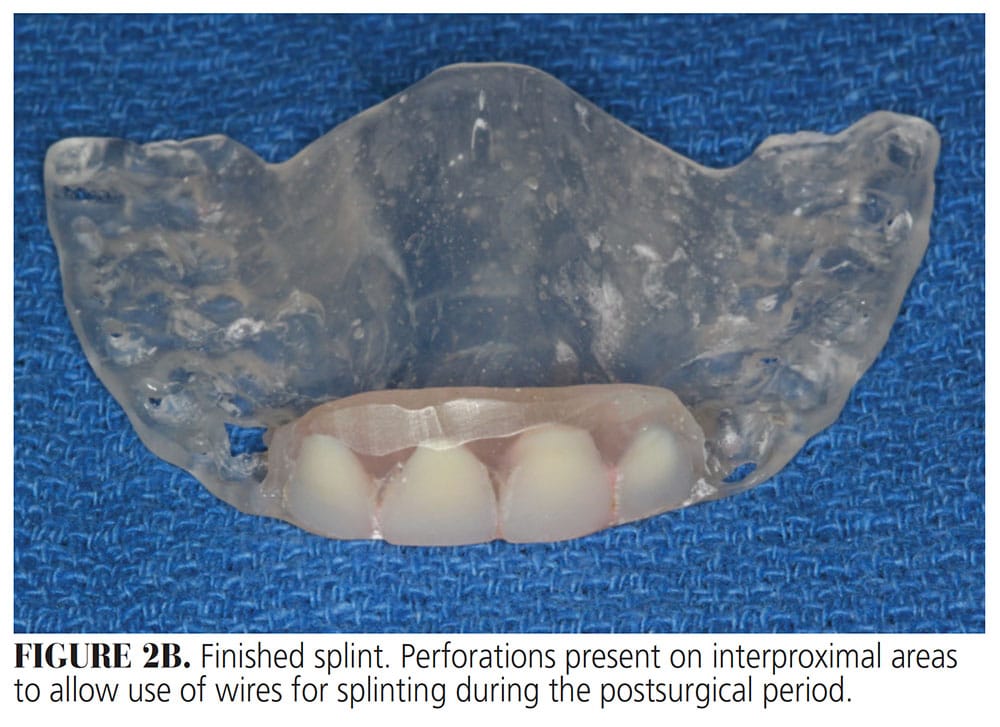 The aim of this paper is to present an alternative option to provide an esthetic outcome on a temporary basis for patients who have missing anterior teeth and are not able to use any kind of interim prosthesis during the postsurgical healing period. This approach helps support the patient’s self-esteem and permits healing of the surgical sites. 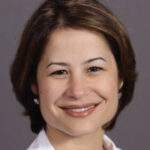 Amara Abreu, DDS, MSD, FACP, is an associate professor and serves as associate chair of the Department of Restorative Sciences at the Dental College of Georgia at Augusta University. She is a diplomate of the American Board of Prosthodontics.

C. Brent Haeberle, DMD, is an assistant professor and director of the removable prosthodontics section in the Department of Restorative Sciences at The Dental College of Georgia at Augusta University. An author and lecturer, he has more than 30 years of private practice and teaching experience in removable, fixed and implant prosthodontics. He can be reached at [email protected] 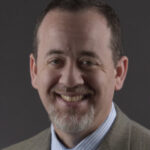 Daniel Levy-Bercowski, DDS, MSD, is a dual trained pediatric dentist and board-certified orthodontist. He is a professor in the Department of Orthodontics at the Dental College of Georgia at Augusta University, and is also codirector of the Augusta University Craniofacial Center. 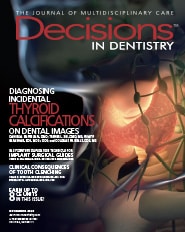