Dental team members must demonstrate an understanding of glycemic monitoring and management to best serve patients with this common chronic disease.

By Colleen M. Olson, RDH and Brian L. Mealey, DDS, MS On Jan 1, 2016
0
Share
Dental team members must demonstrate an understanding of glycemic monitoring and management to best serve patients with this common chronic disease
PURCHASE COURSE
This course was published in the January 2016 issue and expires 01/31/19.

Diabetes mellitus is a chronic disease affecting more than 29 million Americans, or approximately 9% of the U.S. population.1,2 About one-third of those with the disease remain undiagnosed, which means they are not adequately maintaining their health. With such a high prevalence, dentists and their teams will likely encounter patients with diabetes in clinical practice.

In order to understand diabetes, the dental team must learn how carbohydrates are metabolized (Figure 1).3,4 In a healthy individual, eating initiates a series of events that results in the breakdown of complex carbohydrates into simple sugars (glucose), which are then absorbed across the gastrointestinal lining into the bloodstream. As the blood glucose levels rise, insulin is secreted from the pancreatic β-cells. Glucose is too large a molecule to pass across the cell membrane of target cells — such as muscle cells, which are major consumers of glucose — without the action of insulin. Insulin binds to receptors on target cells, increasing permeability to glucose and allowing glucose to enter the target cells (Figure 2). Blood glucose levels decrease as glucose is absorbed into muscle cells.

There are two main types of diabetes: type 1 (formerly referred to as insulin-dependent diabetes), and type 2 (formerly referred to as noninsulin-dependent diabetes).4,5 Patients with type 1 diabetes lack the ability to produce insulin. Insulin production diminishes and eventually ceases when a patient’s autoimmune system destroys the pancreatic β-cells. These individuals rely on insulin injections to maintain normal blood glucose levels. Patients with type 1 diabetes are generally diagnosed in childhood or young adulthood.

Type 2 constitutes 90% to 95% of all diabetes cases and is more common in nonwhite populations. Its main cause is insulin resistance.3–5 Patients with type 2 diabetes can produce insulin, but their muscle cells exhibit insulin resistance. After a meal, the pancreas secretes insulin, but the insulin does not effectively activate its receptor on target cells, so glucose transport into the cells is inhibited. These patients do not rely on insulin injections for survival, but they may take medications that alter insulin production by the pancreas and insulin sensitivity at the target cells.6 Individuals with type 2 diabetes may also take supplementary insulin as part of a management regimen. Insulin resistance may be reduced by weight loss and pharmacotherapy, but is generally never restored to normal. 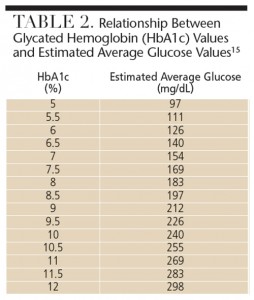 The irreversible binding of glucose to hemoglobin is the basis of the HbA1c test. Glucose remains bound to the hemoglobin molecule for the entire lifespan of the red blood cell, which is approximately 120 days.11 High HbA1c levels indicate that a greater percentage of the hemoglobin on red blood cells has become glycated by the circulating blood glucose. Unlike the fasting, casual and post-prandial glucose tests that measure the glucose content of blood at any given moment, the HbA1c test provides the approximate glucose level in the bloodstream over the two-month to three-month period prior to the lab test.11

The HbA1c lab test can be used in both the diagnosis of diabetes and evaluation of long-term glycemic control.5 When used for diagnosis, an HbA1c value of less than 5.7% is considered normal. An HbA1c of ≥6.5% is diagnostic for diabetes, while an HbA1c between 5.7% and 6.4% is used to diagnose prediabetes.5

For patients diagnosed with diabetes, the quality of glycemic control is directly related to the risk of developing complications, such as kidney, eye and nerve disease.12,13 Therefore, physicians use diet, exercise and medications to maintain glycemic control in patients that is as close to normal as possible. The American Diabetes Association recommends that individuals with diabetes control their blood sugar so the HbA1c level remains <7%.5 In the U.S. diabetes population, only about 30% of patients are able to attain this target range.14 When a patient’s HbA1c rises above 8%, the association recommends the physician intervene with changes in the diabetes management regimen.5 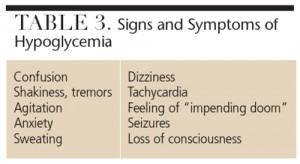 While the HbA1c test averages the glucose over the preceding two-month to three-month period, it does not provide an indication of the heights and depths of the peaks and valleys in normal daily blood glucose levels.5,6 In recent years, physicians have altered the way they discuss patients’ glycemic control. Individuals with diabetes use glucometers daily, and the units of measure for glucometers in the U.S. are milligrams per deciliter (mg/dL). Thus, patients become familiar with blood glucose readings such as 98 mg/dL and 156 mg/dL. The HbA1c test results are stated as a percentage, which maybe confusing for patients. As such, physicians now convert the results of the HbA1c test into an estimated average glucose or eAG (Table 2).5,15 The eAG simply converts the HbA1c percentages into mg/dL, making it easier for patients to interpret the results.

MANAGING DIABETES IN THE DENTAL OFFICE

Hypoglycemia is the most common complication of diabetes, particularly among those whose treatment involves insulin therapy.5 Shakiness, sweating and tachycardia often precede hypoglycemic reactions, but some events occur without warning. Table 3 provides a list of signs and symptoms.

The easiest way to prevent a hypoglycemic event in the dental office is to ask patients with diabetes to bring their glucometers to each dental appointment.16 Prior to the start of treatment, patients should check their blood glucose levels and clinicians should record the results in the treatment notes. Patients should also be asked if they have taken their diabetes medication, and when and how much they’ve recently eaten. By making this pretreatment blood glucose evaluation an office policy, the dental team communicates the importance of responsibly managing patients’ diabetes while under the team’s care.16 By asking patients to bring their glucometers to the dental office, clinicians are able to take an immediate assessment of blood glucose levels should the patient begin to ex­hibit signs or symptoms of hypoglycemia.

If the pretreatment glucometer reading approaches dangerously low levels, patients should consume approximately 15 grams of carbohydrates, such as 4 ounces to 6 ounces of juice, to raise the glucose to a safe range for the duration of the appointment. For example, if the pretreatment glucometer reading is 82 mg/dL before an hour-long procedure, the patient is close to the 60 mg/dL to 70 mg/dL level, the point at which hypoglycemia symptoms may occur. Therefore, it may be wise to give the patient approximately 15 grams of carbohydrates before proceeding. This amount usually raises blood glucose levels by 40 mg/dL to 60 mg/dL in a few minutes.

While the glucometer is an important short-term tool for assessing glucose levels, when determining how well an individual’s blood glucose is controlled over the long term, clinicians should request HbA1c values from the patient’s physician.4,16 Obtaining the HbA1c values from physicians, rather than patients, is important because patients may not always know their most recent percentages. In other cases, patients may guess inaccurately or generalize the results.

Dental professionals frequently treat patients with diabetes, and thus need to understand the basics of diabetes management. The HbA1c test is a critical component of assessing the quality of patients’ glycemic control over the long-term. In combination with point-in-time glucometer testing, the HbA1c also provides an assessment of risk for hypoglycemic emergencies in the dental office.

Colleen M. Olson, RDH, is a dental hygienist practicing in San Antonio. She can be reached at [email protected]

Brian L. Mealey, DDS, MS, is a professor and director of the graduate program in the Department of Periodontics at the University of Texas Health Science Center School of Dentistry at San Antonio. He has published more than 100 articles, abstracts and textbook chapters in the scientific literature, with an emphasis on the relationships between oral and systemic health. 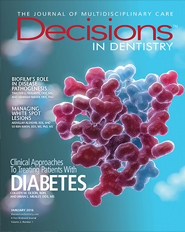