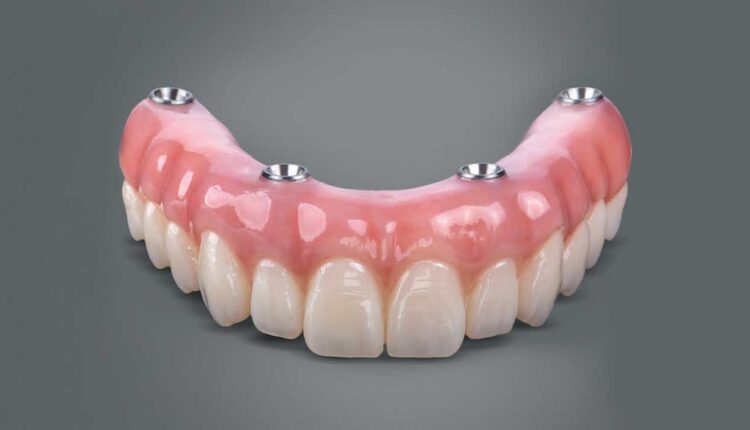 Dental implant care has revolutionized prosthodontics. Traditional implant loading protocols required burying the implants for four to six months before restoring them with a prosthesis.1 Early reports of immediate loading on the day of surgery came out in the early 1990s, but this was done on axially placed implants.2 The all-on-four concept was popularized about 20 years ago by Malo et al.3 The crux of this concept is tilting the distal implants to avoid vital structures and splinting the immediately loaded provisional prosthesis, thereby providing cross-arch stabilization during the initial healing period.3 During the germinal years, this new concept was fraught with skepticism, as there was insufficient data to support the idea of using tilted implants and immediate loading — or the effects on survival and success of the implants and prostheses.

Recent reports have shown this treatment modality to be highly successful.4–11 In a systematic review, Soto-Penaloza et al12 stated the all-on-four concept is a predictable treatment choice for atrophic jaws, with acrylic fracture being the most common prosthetic complication, and peri-implantitis being the most common biologic complication. With the advent of monolithic zirconia, success rates for the prosthesis are promising — and with potentially less prosthetic complications.13 Although highly successful, this treatment concept is not a panacea for all edentulous (or soon-to-be edentulous patients), as complications can, and do, occur.14 Advantages and disadvantages of the all-on-four concept are presented in Table 1. Effective communication and a high level of skill and experience are required due to the surgical, prosthodontic, and technical aspects of this treatment — and it starts with proper diagnosis, case selection and treatment planning.

There is enough data to support the validity of this concept.4–11 For the motivated patient, the clinician needs to assess whether this treatment is a suitable choice. The first step is to evaluate the patient’s medical history to see if he or she is a good surgical candidates for implant treatment. Curtis et al15 recently published on risk factor evaluation for dental implantology, which showed the more medically compromised the patient, the higher the chances of implant failure. Risk factors — such as smoking, unmanaged diabetes and certain medications — may interfere with osseointegration, leading to high early failures or increased late failures. As part of the treatment planning process, clinicians should complete a thorough extraoral, intraoral and radiographic examination, including cone beam computed tomography (CBCT).

During the extraoral evaluation, providers should look for temporomandibular disorders and restricted range of motion, as these conditions can negatively impact treatment outcomes. Overall facial esthetics, skeletal relationship, occlusal vertical dimension, and any asymmetries of the face should be noted. In the intraoral examination, the oral mucosa, arch form, condition of the teeth (and periodontal tissues, if present), oral hygiene, and existing occlusion should be evaluated.16 If the patient has existing complete dentures, the prostheses should be evaluated for esthetics and occlusion, and remade or modified if necessary. A CBCT image will reveal details about bone density, bone volume, anatomical structures and intraosseous pathology. Specific implant planning software can be used to plan the implant positions. Radiographic and surgical guides maybe fabricated simply as duplicates of the prostheses, with windows cut out to visualize bone reduction and abutment position, or stereolithographically using computer aided design/​computer aided manufacturing (CAD/​CAM) software.16

Anatomical Structures — The anterior-most extension of the maxillary sinus and mental foramen or nerves can affect the anterior-posterior (A-P) spread, or, in other terms, the length of the cantilever. The recommended length of the cantilever is about 15 to 20 mm, or 1.5 times the distance between the center of the anterior-most implant and distal edge of the platform of the posterior implant.18 Keep in mind these recommendations were made when acrylic-metal alloy hybrid prosthesis were most commonly used. The risk of having too long a cantilever is screw loosening, screw fracture, or prosthesis fracture at the distal-most implant. Implant-supported fixed complete dentures are generally designed to have 12 teeth, typically two premolars and one molar, or, if implant positioning is less than ideal, three premolars (with a one to two premolar cantilever). Patients should be fully aware the second molars are not going to be on the prostheses (provisional and definitive).

Vertical Dimension of Bone — The protocol for the all-on-four technique calls for an alveolectomy, which is surgical removal of some or all of the alveolar bone for three main reasons:

The superior and inferior limits of bone reduction are the occlusal plane and anatomical structures. The vertical dimension of occlusion can be altered within esthetic and functional parameters. It is more challenging to alter anatomic structures, as this can increase cost and morbidity of the treatment. During the planning stages of implantology, if the clinician faces challenges with the proposed bone reduction that could compromise the result, the treatment plan should be altered.

Horizontal Dimension of Bone — The resorption pattern of the alveolar bone in the maxilla is upward and inward, while it is downward and outward in the mandible. As the all-on-four concept minimizes or avoids bone grafts altogether, the trajectory of the implants in the anterior maxilla and mandible may be unfavorable. This can lead to excess palatal/​lingual bulk of the prosthesis affecting speech; in addition, palatal implant positioning can also lead to a large anterior cantilever, which maybe more prone to mechanical and hygiene complications.19

Prosthetic Materials — Implant-supported fixed complete dentures  are available in various configurations and materials, mostly in the combination of acrylic resin, high-performance polymers, metal alloys and ceramics. A thorough knowledge of material properties and dimensions for adequate strength is important to plan the appropriate cantilever length and vertical bone reduction.20

The following case report demonstrates the use of these treatment planning concepts by presenting a brief overview of a treatment protocol using the all-on-four technique. It is beyond the scope of this article to explain the procedure in detail. A recent review article explains these concept in more detail.17

Examination and Treatment Planning — A 42-year-old male presented with a chief concern of inability to chew his food, along with missing posterior teeth and a loose mandibular anterior tooth. His medical history was unremarkable. He hadn’t received dental care for 10 years. The extraoral examination showed the temporomandibular joints and range of motion were within normal limits. The oral cancer screening was negative. Intraoral examination in the maxilla revealed missing posterior teeth, except #15. Tooth #5 was supraerupted and the palatal surfaces of the maxillary anterior teeth showed signs of tooth surface loss (Figure 1 and Figure 2). In the mandibular arch, tooth #24 was bonded to 23 and 25 with composite. There was moderate-to-severe calculus accumulation around #24. The mandibular molars were missing (Figure 1 and Figure 3). An intraoral complete series of radiographs was taken, in addition to a panoramic radiograph (Figure 4). The radiographic examination revealed a radioluceny in relation to #24, with mild-to-moderate generalized bone loss.

A periodontal examination revealed a periodontal abscess in relation to #24, with generalized mild plaque-induced gingivitis. The occlusal examination revealed an anterior deep bite, with a 6-mm vertical overlap, along with loss of posterior support. A facebow transfer, centric relation records, and maxillary and mandibular alginate impressions were made in order to articulate casts on a semi-adjustable articulator and perform a diagnostic wax-up. After thoroughly discussing the diagnosis and treatment options with the patient, he decided on a mandibular fixed complete denture on four dental implants, and to have four dental implants on the maxillary left and right posterior region for implant-supported fixed restorations.

A CBCT image was taken and, using implant planning software, the implant positions were planned in conjunction with input from the oral surgeon (Figure 5). Definitive impressions and maxillomandibular relation records were obtained to fabricate the maxillary and mandibular provisional prostheses in the dental laboratory. Two surgical guides were fabricated using a duplicate of the artificial tooth arrangement for each arch.

Surgery and Immediately Loaded Provisional Prosthesis — On the day of surgery, the patient was sedated and all the mandibular teeth, #5 and 15 were extracted. A full-thickness flap was raised on the mandibular arch to expose the alveolar process and mental neurovascular bundles. An alveolectomy was performed to remove and flatten the bone in order to create a platform for the implants, using the surgical guide as a reference (Figure 6). Four endosteal implants were placed in the mandible, with the anterior two oriented straight, and the posterior two angled at 30 degrees to avoid the mental foramen on each side (Figure 7). The other surgical guide was used to help place implants in sites #3, 5, 13 and 14. A maxillary acrylic removable partial denture was used as a provisional in the maxillary arch.

Definitive Prostheses — After five months of healing, the maxillary definitive metal ceramic re­storations were completed. For the mandibular arch, the provisional restorations were removed and a heavy-body polyvinyl siloxane impression material was used to pick up splinted abutment-level open tray impression copings. At the next visit, maxillomandibular relation records were obtained, and an artificial tooth arrangement try-in was performed to verify occlusion and esthetics. Using this information, a robust titanium (Ti) bar was designed to allow adequate thickness and retention of acrylic resin and denture teeth, and then milled using CAD/​CAM technology. The A-P spread was adequate to provide two premolars and one molar on the mandibular arch. The Ti bar was tried in on the mandibular abutments, and passivity of the fit was verified using radiographs and the one-screw test (Figures 10A through 10C).

The definitive mandibular prosthesis was a titanium-acrylic resin hybrid restoration (Figure 11 and Figure 12). It was delivered uneventfully and occlusion was adjusted to provide mutually protected occlusion. An occlusal device was also delivered to protect the restorations. Due to financial reasons, the patient did not choose a zirconia prosthesis, but is strongly considering it once he can afford it.

This article highlights treatment planning principles for the all-on-four protocol in dental implantology, and demonstrates these principles in a case presentation. In dental implant care, it is important to recognize this as a valid approach for the right patient and case. This concept can likewise be applied with a combination of straight and angled implants, and with five or six implants, as well. 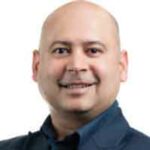 Amit Punj, DMD, MCR, FACP, is an associate professor at Albert Einstein College of Medicine and chief of prosthodontics and director of the postgraduate program in prosthodontics at Montefiore Medical Center in the Bronx, New York. A clinician and educator, he is also adjunct faculty at Oregon Health & Science University School of Dentistry in Portland. He can be reached at [email protected].

Sameh K. El-Ebrashi, BDS, MS, FACP, is a diplomate of the American Board of Prosthodontics and maintains a private practice with ClearChoice Implant Center in Portland.

Jeffrey M. Burstein, DDS, MD, is a diplomate of the American Board of Oral and Maxillofacial Surgery and maintains a private practice with ClearChoice Implant Center in Portland.

Grandio Blocs and Discs By VOCO 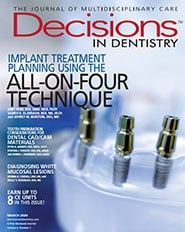