Researchers have found that approximately 30% of the antibiotic prescriptions written in outpatient settings are inappropriate.

Researchers have found that approximately 30% of the antibiotic prescriptions written in outpatient settings are inappropriate.1 Obviously, this type of overuse is a serious concern. According to the U.S. Centers for Disease Control and Prevention (CDC), Clostridium difficile and carbapenem-resistant Enterobacteriaceae are two of the most threatening antibiotic-resistant bacteria found in health care settings; combined, these pathogens kill an estimated 15,600 American per year.2 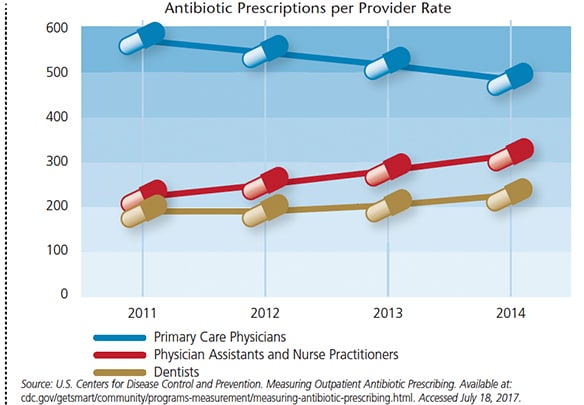 Combatting antibiotic resistance will require a collaborative effort from a diverse group of health care providers, including dentists. The American Dental Association is working closely with medical organizations to update best-practice standards in an attempt to curb the overuse of antibiotics in oral health care. However, CDC data show that while the per provider prescription rate for primary care physicians has steadily declined, it continues to increase for dentists.

Why? A study that examined the prescribing patterns of dentists and physicians in British Columbia, Canada, found that between 1996 and 2013, physician prescribing declined by 18.2%, while dental prescribing increased by 62.2%.3 The authors suggested several possible explanations, including:

While all are likely factors, why do primary care physicians appear to be so much better at reducing their antibiotic prescriptions? Perhaps they’re not. A possibility suggested by the CDC data is that physician prescribing in outpatient settings is declining because nurse practitioners and physician assistants are seeing more patients and replacing doctors in the prescribing of antibiotics. Indeed, when physicians, nurse practitioners and physician assistants are combined, there is a small increase in the prescribing rate in recent years.

As a profession, dentistry should continue its efforts to reduce unnecessary prescriptions as part of a commitment by all providers to promote antibiotic stewardship and optimal patient care. 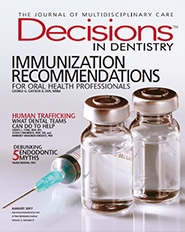