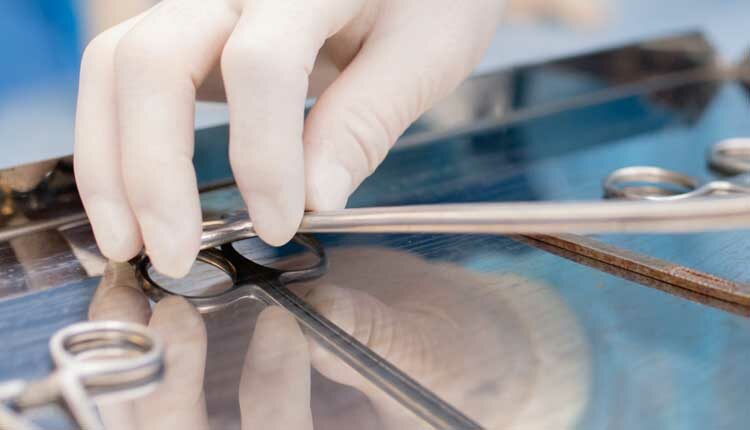 By Apoorv Goel, BDS, MS, MSD, David A. Mott, DMD, MS, Corinthia Wilkerson, MBS and Alexandria T. Ellzey, MHS On Jan 22, 2021
0
Share
PURCHASE COURSE
This course was published in the January 2021 issue and expires January 2024. The authors have no commercial conflicts of interest to disclose. This 2 credit hour self-study activity is electronically mediated.

Frequently, the general dentist faces a dilemma about whether a carious tooth can be restored to function or if extraction is warranted. A healthy periodontium with a sound dentition is a prerequisite for a favorable long-term prognosis. The American Academy of Periodontology’s Glossary of Periodontal Terms defines clinical crown lengthening as a surgical procedure that aims at exposing sound tooth structure for restorative purposes via apical repositioning of the gingival tissue, with or without removal of alveolar bone. This is a prescription procedure designed to achieve better function and improve the predictability of restorative treatment and maintenance care.

Indications for crown lengthening from a restorative standpoint include ensuring the necessary tooth length for successful restoration, access (e.g., removal of subgingival caries), finishing tooth preparation, and impression making. The procedure also provides stable gingival margins around the tooth, and can likely prevent irritational gingival inflammation. This review will touch on clinical considerations for surgical crown lengthening by reviewing the following:

It is generally accepted that maintaining the integrity of an average 3 mm biologic width reduces the risk of periodontal attachment loss.4,5 Subgingival restorative margins induce the periodontal inflammation resulting from biologic width violation. Use of crown lengthening surgery can establish a satisfactory biologic width for teeth with subgingival caries, inadequate crown length or tooth fracture; it can also address esthetic concerns.

Surgical crown lengthening can provide additional crown length for restorative procedures on a severely decayed tooth. The most common indications for the surgery include restorative and esthetic concerns (Table 1).4 Preprocedural considerations include (but are not limited to) the crown-to-root ratio, maintaining the integrity of biologic width, healing time, and favorable outcomes following restoration.

In a multidisciplinary model, where the restoring dentist refers the patient to a surgeon, the restoring dentist should evaluate all factors (Table 2) that might affect the dentition’s prognosis. Such consideration can help the referring dentist and surgeon develop a treatment plan and establish the sequence of the procedure. Generally, the restorative dentist can collaborate with the surgeon to determine the amount of tooth structure to be exposed during the surgery. The ultimate goal is to achieve a fully functional and physiologically sound dentition and occlusion — and only by thoroughly considering all presenting factors can a determination be made that crown lengthening is suitable for a particular case.

A second consideration for the surgical procedure is the extent of bone reduction. The bone sounding technique is a reliable method to address biologic width variations at different sites and among individual patients. Performed under local anesthesia, bone sounding involves probing the sulcus to the point it stops at the crestal bone.4 The measurement is descriptive of the epithelium attachment, connective tissue attachment, and the gingival sulcus. Various studies have shown that the biologic width that was noted preprocedurally is redeveloped after healing. The extent of osseous reduction is decided based on the preoperative assessment of biologic width. The same distance is maintained from the cementoenamel junction or future crown margin to the crestal bone.

Bone reduction involves both osteotomy and osteoplasty procedures to create a positive architecture and smooth bony surfaces, which are achieved with the help of high-speed rotary or piezoelectric cutting instruments and hand instruments, such as chisels. A case report of a crown lengthening procedure for tooth #8 is described in Figures 2A through 4C.

Following a crown lengthening procedures that apically position the flap after osseous reduction, the previous biologic width tends to reestablish itself. It is found that osteoblastic activity reaches its peak between the third and fourth week after osseous resective surgery. Soft tissue repair — including reestablishing the attached epithelium and connective tissue — begins one week postoperatively and reaches functional maturity between six to nine months posttreatment.6–9\

The healing phase can reveal the periodontal tissue’s positional changes, including the marginal gingiva, connective tissue attachment, and surrounding crestal alveolus. Often, the gingival margin’s positional change depends on the flap’s position to the osseous crest at the time of surgery. Pontoriero and Carnevale10 observed that if the flap is placed at the crestal level, the gingival margin’s postoperative rebound was approximately 3 mm. If the flap was placed at a more coronal level, less rebound was noticed for the gingival margin’s positional changes.10 Studies show many variables in altering the periodontal tissues and biologic width. Postoperative healing and maturation of the periodontal tissues after surgical crown lengthening involves bone remodeling in terms of density, with possible crestal height resorption and corresponding soft tissue changes in the form of regrowth, stability or recession.11 Pontoriero and Carnevale10 reported significant coronal regrowth of the soft tissue margin at interproximal and buccal/lingual sites in patients with a thick tissue biotype, as opposed to a thin tissue biotype. Besides tissue biotype, other factors that may influence the healing process and impact the final position of supporting periodontal tissues include age, healing time, and the operator’s clinical skills.10–12

Brägger et al6 evaluated changes in the periodontal tissue complex immediately following crown lengthening and at six months postsurgery. They found that crown lengthening is a stable procedure, and the gingival margin does not move significantly after surgery. That is, the periodontal tissues can move over six months with minimal changes in the gingival margin levels.6 The team emphasized the need to delay margin placement up to six months in areas of esthetic concern following crown lengthening surgery.6 It is commonly accepted that six to 12 weeks of healing after crown lengthening are sufficient before the restoring dentist can place the final restorative margins and take the final impression for the functional or posterior restorations. For esthetic or anterior cases, three months is the minimal healing time for impressions and final restoration. 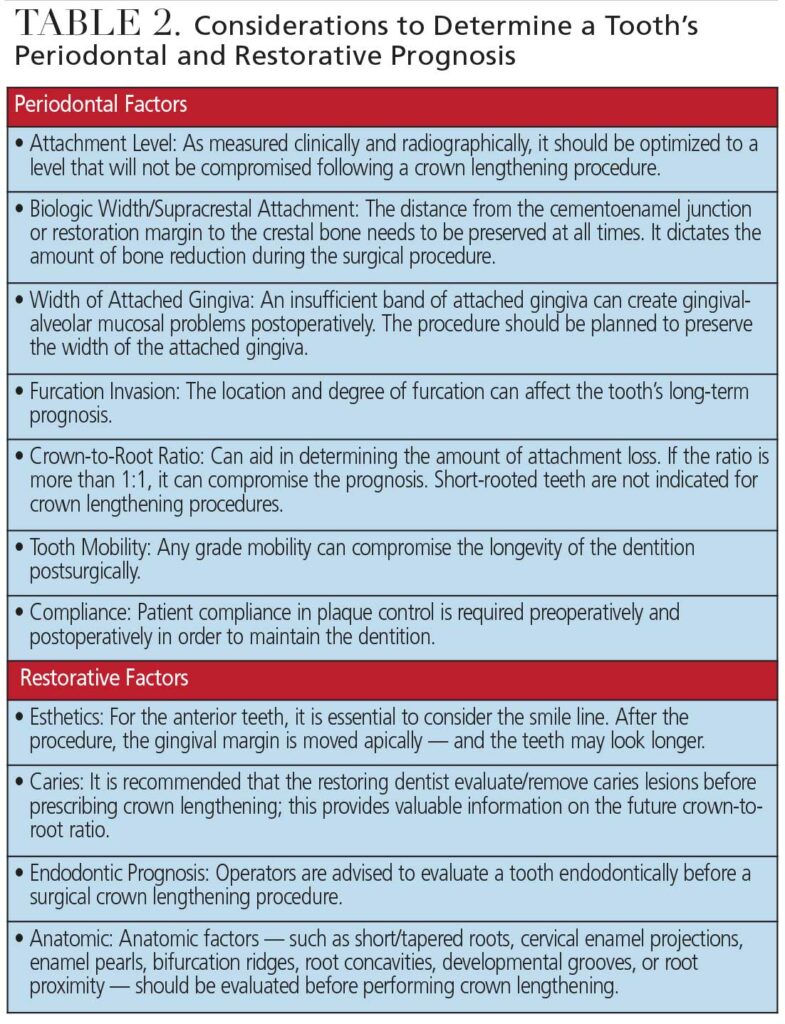 Clinical crown lengthening for functional purposes is often necessary to provide adequate retention and resistance form by gaining supracrestal tooth length, and reestablishing the biologic width to prevent impingement of restoration margins on the attachment apparatus.13,14 Deas et al13 proposed that crown lengthening should optimally create at least 3 mm of tooth structure between the alveolar crest and future restorative margin to allow for proper restoration.

Prior to treatment, it is important to evaluate the supracrestal attachment at each site. This is generally accomplished with bone sounding, which helps determine a predictable postprocedural location for the gingival margin.

The surgical technique, either via gingivectomy or apically positioning the flaps, will depend on two critical factors: the underlying crestal bone, and width of the attached gingiva. Following surgery, clinicians must determine the optimal timing to place the final restoration. This decision is based on the final positional adaptation of the gingival margin, as well as restorative (functional and/or esthetic) considerations. As noted, the consensus is a minimum of six weeks of healing for functional purposes, and a minimum of three months for esthetic crown lengthening cases.11,14

Apoorv Goel, BDS, MS, MSD, is an assistant professor in the Department of Periodontics at Meharry Medical College School of Dentistry in Nashville, Tennessee. He also maintains a faculty practice limited to periodontics and dental implants. He can be reached at [email protected].

David A. Mott, DMD, MS, is a clinical associate professor and chair of the Department of Periodontics at Meharry Medical College School of Dentistry. A diplomate of the American Board of Periodontology, he practices periodontics and implant dentistry.