The diagnosis of this condition is made through a combination of clinical and radiographic findings.

By Patrick J. Battista, DDS, Dip ABE On Jun 1, 2016
0
Share
The diagnosis of this condition is made through a combination of clinical and radiographic findings.

An inflammatory process occurring within the pulp tissue, internal resorption ultimately leads to loss of dentin.1 While the exact process is not fully understood, the evidence indicates there are two requirements. First, multi-nucleated giant cells (dentinoclasts, which are virtually identical to osteoclasts) must be present in granulation (i.e., inflammatory) tissue in the pulp. Second, predentin and odontoblasts in the area of resorption must be lost2,3 (theories include trauma, or heat damage caused by preparing teeth for restorative procedures).4 The dentinoclasts remove the dentin concentrically by adhering to it and producing an acidic environment to dissolve the dentin. This gives rise to internal resorption’s characteristic radiographic appearance of a circular radiolucency continuous with the pulp canal space.

The diagnosis of internal resorption is made through a combination of clinical and radiographic findings. For in­ter­nal resorption to occur, some vital pulp tissue must be present. The dentinoclasts and inflammatory tissue must be associated with vital tissue in order to carry out the resorptive process. Consequently, pulp test results (e.g., electric, cold or heat) are usually positive. It is possible, however, to obtain a negative pulp test result if the coronal pulp tissue has become necrotic but the apical pulp tissue is still vital.

Patients typically present with no pain, and are asymptomatic.5 Internal resorption is usually found during recall exams or routine radiographic examinations. Clinically, a tooth may appear pink. This is due to the loss of dentin creating a large pulp space, which allows more blood vessels to fill the area and results in a pinkish hue. This is termed “pink tooth of Mummery,” after anatomist James Howard Mummery. This was once considered pathognomonic for internal resorption, but it is also seen in a subtype of external resorption.

In addition to conventional, two-dimensional (2D) radiography, three-dimensional (3D) imaging is available. An advanced form of imaging, cone beam computed tomography (CBCT) is making a pronounced impact in the field of endodontics. As opposed to a medical CT scan that uses a fan-shaped beam with multiple rotations for each slice of the image, a CBCT scan uses a conical beam and one rotation to produce all of the slices for the image. The images are made up of voxels, which are essentially 3D pixels.6 The resulting scan allows three viewing angles — axial (inferior/superior axis), coronal (anterior/posterior axis), and sagittal (medial/distal axis) — and the image can be viewed from any angle among these perspectives.

Because endodontic procedures are usually concerned with a small area, or single tooth, it is best to use a limited field of view (FOV), as opposed to the larger FOVs used in other disciplines of dentistry. A limited FOV yields several benefits. A smaller FOV increases image resolution, while at the same time providing a lower effective radiation dose to the patient. For endodontic purposes, a resolution with a voxel size of 75 μm to 125 μm is appropriate.6,7 The effective radiation dose depends on the actual cone beam device and the area being scanned, and can range from 5 μSv to 191 μSv. For comparison purposes, a typical digital periapical radiograph emits 6 μSv. Maxillary anterior scans require the least ionizing radiation, while the mandibular posterior region requires the most.8

The use of CBCT technology provides great detail in the area of interest; in cases of internal resorption, for example, the exact location and extent of the resorptive defect can be visualized (Figures 2A through 2C). This helps clinicians determine a prognosis and treatment plan for the patient in a way that’s not always possible with traditional radiographs.9 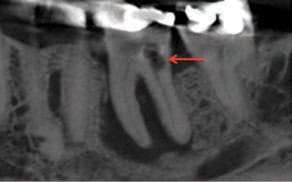 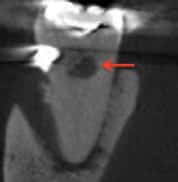 This leads to the question of when CBCT should be utilized in these cases. While this clinical decision is subject to debate, the As Low As Reasonably Achievable (ALARA) principle should always be followed to minimize the patient’s ionizing radiation exposure. In addition to ALARA concerns, there is also the consideration of the additional expense of a CBCT scan. Both are pertinent to the decision, especially in cases in which the information it provides may not be significantly different from 2D radiography. As a result, CBCT technology should be used judiciously — and only when a definitive diagnosis or treatment plan is unable to be formulated without this information.

The chemical cleaning portion of root canal therapy typically involves using various concentrations of sodium hypochlorite to disinfect the canal and dissolve granulation tissue. Clinicians can also place calcium hydroxide, which will serve as an intracanal medicament between appointments. This will help to disinfect while dissolving any remaining granulation tissue. The canal can then be obturated with gutta-percha and a sealer of the clinician’s choice.

One aspect to consider is the size of the resorptive defect. Although root canal treatment will halt the resorptive process, if the defect is too large, the tooth may mechanically fracture and fail. Like most disease processes, it is always best to identify these conditions early, and initiate proper treatment.

In summary, internal resorption is the loss of dentin in the canal space, and is caused by multi-nucleated giant cells called dentinoclasts. Patients are usually asymptomatic, so an accurate diagnosis depends on a thorough examination of radiographs, along with clinical observations and testing. If detected early (when sufficient root structure is still present), root canal treatment, followed by a definitive restoration, will help the patient maintain a healthy and functioning tooth.

Considerations for Sedation In Dentistry