Used in therapy for more than 100 years in Eastern Europe and the former Soviet Union, bacteriophages are viruses that parasitize a bacterium by infecting it and reproducing.

Used in therapy for more than 100 years in Eastern Europe and the former Soviet Union, bacteriophages are viruses that parasitize a bacterium by infecting it and reproducing. These organisms can be bactericidal because they inject their DNA into the microorganism and reproduce at a rapid rate, which ruptures the bacterial cell wall. Although the technique is not widely employed in Western medicine, there is growing interest in using bacteriophages to kill antibiotic resistant bacteria. This is potentially promising, because even as antibiotic resistance has spread, the number of new antibiotics introduced has been declining.

A recent article reported on a young woman with cystic fibrosis who had been taking antibiotics for years. Following a lung transplant, there was a rapid spread of an infection that no longer responded to antibiotics. As a result, physicians at the Great Ormond Street Hospital for Children in London decided to treat the case using phages. The medical team partnered with researchers at the University of Pittsburgh to find phages that might be useful. Pitt was selected because it has a library of more than 15,000 different phages and their individual genetic makeups. From this group, three were chosen.

The three-phage cocktail was administered intravenously and topically over six months. Symptoms diminished and the patient’s physicians saw gradual improvement. The efficacy of this therapy was further enhanced by removal of a gene that prevents the phages from killing the bacteria, thus increasing the probability of cellular destruction of the unwanted organisms.

Could these viruses be of use in dentistry? A report by Shlezinger et al1 notes that “current therapies of biofilm-derived oral infections lack sensitivity; they are not species-specific and kill pathogenic species, as well as commensal species that are protective against pathogenic biofilms.” The paper also points out that phages are highly effective against pathogenic biofilms and easy to isolate and manipulate. The authors concluded that targeted phages show promise in dental therapy. A second study described the isolation of a bacteriophage that specifically infects the periodontal pathogen Fusobacterium nucleatum.2 Studies are ongoing on the use of other viruses in the treatment of dental caries and periodontal disease.

Will bacteriophage therapy become more widely accepted as an adjunct in Western medicine? And, more importantly, will this approach prove helpful in treating oral diseases? Time will tell, but the longevity of this approach in other parts of the world offers reason for hope. 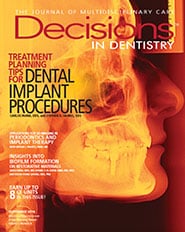