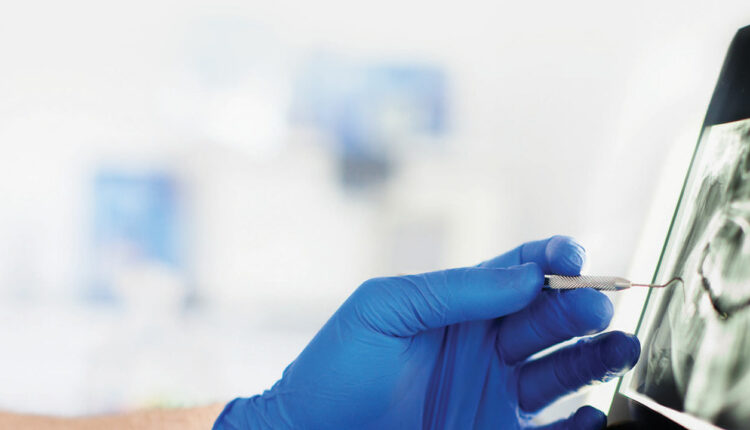 Anatomic Variation of the Mental Foramen

Careful presurgical planning, radiographic evaluation and surgical technique will minimize complications when anatomical structures, such as the mental foramen, are positioned outside of the expected location.

Anatomical variations can complicate periodontal surgical procedures and potentially compromise patient outcomes, thus increasing morbidity and/​or mortality. In the mandible, the mental foramen and associated neurovascular bundle may be encountered during surgical access. Differences in mental foramen anatomy exist in both the horizontal and vertical location, shape, presence of accessory foramina, and extent of the anterior loop.1 Stretching or crushing the mental neurovascular bundle during flap reflection and retraction can result in nerve injury that manifests as paresthesia, dysesthesia or anesthesia.2

A 56-year-old male presented to the graduate periodontics clinic at the University of Texas Health Science Center at San Antonio in March 2018. His medical history was significant for controlled hypertension. A comprehensive periodontal examination was completed, along with panoramic and full-mouth periapical radiographs. The patient was diagnosed with generalized periodontitis: Stage IV, Grade C.5 The initial treatment plan included extraction of hopeless teeth #2, 7 and 15, and four quadrants of scaling and root planing. After reevaluation, the patient accepted a surgical treatment plan for three quadrants of flap debridement, with guided tissue regeneration. A review of radiographs in preparation for surgery located the left mental foramen near the apical one-third of the roots between teeth #20 and 21 (Figure 1).

On the day of surgery, intravenous access was established, and 8 mg of dexamethasone sodium phosphate was administered immediately preoperatively, followed by titration of 5 mg midazolam throughout the duration of the procedure. Local anesthesia was achieved in the mandibular left quadrant via left inferior alveolar, lingual, and long buccal nerve blocks, with 72 mg lidocaine with 1:100,000 epinephrine and 18 mg bupivacaine with 1:200,000 epinephrine. Buccal and lingual sulcular incisions extended from the distal of tooth #19 to the mesial line angle of #23, with a vertical releasing incision distal to #19. While reflecting the buccal full-thickness flap, the mental foramen and mental nerve bundle were unexpectedly encountered approximately 4 mm apical to the alveolar crest between teeth #20 and 21 (Figure 2).

Subsequently, the mental nerve was isolated and protected for the remainder of the procedure. The flap debridement was completed, along with guided tissue regeneration and bone replacement graft at an intrabony defect at the mesial and lingual surfaces of site #19 (Figure 3). The flap was repositioned and secured with simple interrupted and vertical mattress sutures. Since preoperative dexamethasone was used, no further steroids were prescribed postoperatively. For analgesic and anti-inflammatory purposes, the patient was instructed to take 600 mg ibuprofen and 325 mg acetaminophen every six hours.

Due to this unusual presentation and the fact surgical treatment was also planned for the right side, cone beam computed tomography (CBCT) imaging was immediately obtained to assess the patient’s anatomy. The CBCT showed the most coronal aspect of the left mental foramen 8.6 mm from the CEJ of tooth #20, and 4.1 mm from the interproximal alveolar crest (Figure 4). The right mental foramen was 7.2 mm from the CEJ of teeth #28 and 29, and 5.1 mm from the interproximal crest of bone (Figure 4). The neurovascular bundle continued anteriorly as the incisive nerve on the left and right sides, along with nutrient canals extending inferiorly (Figure 5).

This case report documents bilateral mental foramina that display an unusual proximity to the CEJ of the mandibular premolars. Most of the literature regarding the position of the mental foramen describes the spatial relationship with the mandibular premolars. Depending on the study population, the mental foramen can be found most commonly apical to the second premolar or between the apices of the premolars, and, less commonly, apical to the first premolar or between the roots of the premolars.7–9 Compared to the Neiva et al3 study that established distances from the CEJ of the nearest premolar, the coronal extent of the foramen in this patient of 7 to 8.5 mm from the CEJ falls out of the range of 12 to 22 mm, with a mean of 15.52 + 2.37 mm. Assuming a normally distributed population, 95% of patients would have the coronal portion of the mental foramen position within a distance between 10.78 and 20.26 mm from the CEJ of the nearest premolar.3

In skulls, Sawyer et al10 found multiple mental foramina in 1.4% of American whites, 1.5% of Asian Indians, and 5.7% of African Americans, while Mraiwa et al4 found them in 10% of cadavers they examined. The mental foramen’s anterior loop is important to consider for implant placement and also has anatomical variability. A thorough preoperative radiographic evaluation to check for the presence and extent of an anterior loop is necessary prior to implant placement.

Using two-dimensional radiographs, the mental foramen was visualized in periapical films 47% and 75% of the time by Fishel et al7 and Phillips et al,11 respectively. In two studies reviewing panoramic radiographs, the foramen was identified 87.5% and 95% of the time, but with clear distinction in only 49% and 64% of cases.12,13 Although CBCT images provide a more accurate localization of the mental foramen, they are not often taken when only treatment for periodontitis is proposed.14 The case presented in this paper suggests a CBCT may be indicated whenever anatomical variance is suspected.

The mental foramen usually has a characteristic depression coronal to its position in the mandible that signals its location. Wet sterile gauze can be used to dissect the mucosa around the mental foramen. Once reflected, care must be taken not to stretch or crush the nerve. A groove prepared in the alveolar bone lateral to the foramen can provide a stable place for retractor placement.15

If trauma or damage to a nerve is knowingly encountered intraoperatively, dexamethasone meant for intravenous use (4 mg/​ml) can be applied directly to the site of injury.16 If a neurosensory disturbance is reported by the patient, classifying the impairment helps to direct treatment and provide a prognosis for recovery. Seddon17 described three types of nerve injuries based on axonal damage, specifically neuropraxia, axonotmesis and neurotmesis. Briefly, neuropraxia involves a conduction block with no nerve fiber damage; axonotmesis involves nerve damage with degeneration; and neurotmesis involves severe nerve damage or transection. Sunderland18 modified this classification and described five subclassifications. Given the probable nerve compression during flap reflection and the patient’s paresthesia, neuropraxia was suspected, with an anticipated resolution of up to 12 weeks.

In this case, the mental foramen and associated neurovascular bundle were identified during mucoperiosteal flap reflection. Due to the anatomical variation, the nerve bundle was encountered more coronal than expected, and was likely compressed with the periosteal elevator. Once the foramen was identified, the neurovascular bundle was isolated and protected for the duration of the procedure. Since the patient received 8 mg of intravenous dexamethasone immediately prior to the surgery, postoperative steroids were not prescribed. The postoperative pain management protocol initially consisted of 600 mg ibuprofen and 325 mg acetaminophen every six hours for the first 72 hours. Once a nerve injury was confirmed, the patient was instructed to begin taking 800 mg ibuprofen every eight hours for an additional two weeks. If preoperative steroids had not been administered, oral dexamethasone would have been prescribed as 8 mg for three days, and then 4 mg for three days. As noted above, with careful monitoring the neurosensory deficit resolved over time. 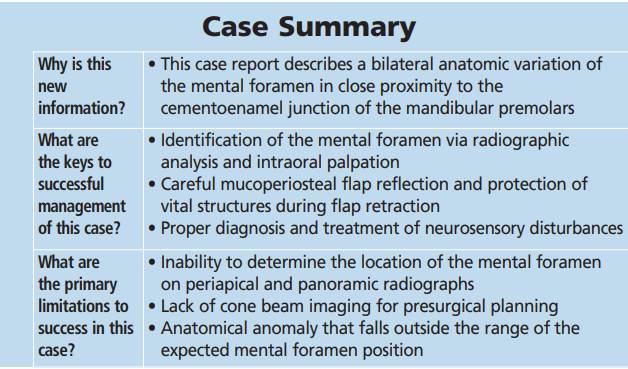 While current literature suggests the majority of individuals will present with a mental foramen near the apices of the mandibular premolars, individual variation is possible. As such, during presurgical assessment of the mental foramen, a CBCT may be indicated if conventional radiography cannot rule out an aberrant location. Even when normal anatomy is expected, as in this case, gentle surgical reflection — and being prepared  for the unexpected — are critical to maintaining positive patient outcomes.

If postoperative complications occur, it is imperative to diagnose the neurosensory impairment, determine the etiology, and begin appropriate treatment as soon as possible. While there is no standardized pharmacological regimen, a combination of corticosteroids and nonsteroidal anti-inflammatory drugs is recommended, along with close monitoring of the patient’s condition.

Michael P. Vieth, DDS, is a third-year periodontics resident at University of Texas Health Science Center at San Antonio School of Dentistry. He can be reached at [email protected].

David E. Deas, DMD, MS, is a clinical associate professor in the Department of Periodontics at the University of Texas Health Science Center at San Antonio School of Dentistry.

Archontia Palaiologou, DDS, MS, is a professor and assistant graduate program director in the Department of Periodontics at the University of Texas Health Science Center at San Antonio School of Dentistry.

Looking to a Brighter Future Ahead