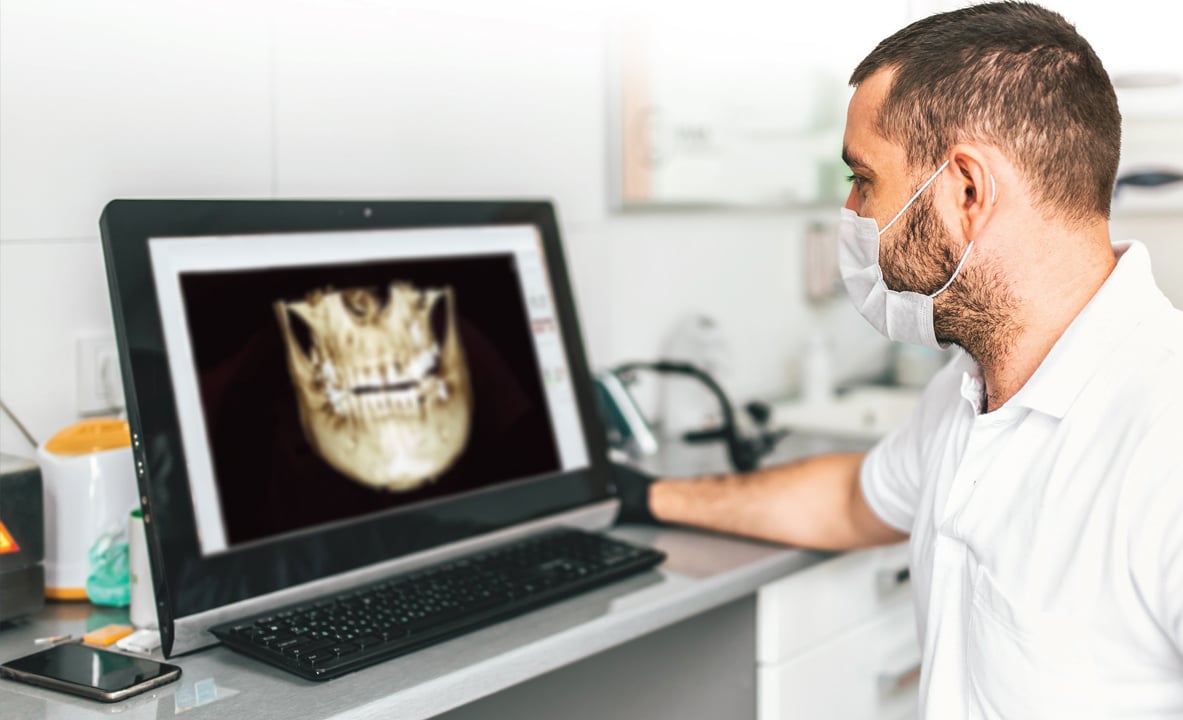 Compared to “subtractive” milling technologies,3 the stereolithography apparatus (SLA) process used in 3D printing is an “additive” workflow in which models are built up in a layering process by printing thin layers of material that are cured with ultraviolet light. The SLA printing process overcomes some of the limitations of conventional subtractive milling in producing intricate internal details. The SLA model was first described for use in surgical planning in the early 1990s.4

As patents for the SLA process expired, there has been a surge in the number of commercial developers entering the market, leading to significant cost reduction and increased availability in desktop printers. The use of SLA and 3D printing in dentistry for the fabrication of dental appliances has been discussed in these pages by Patel and Fratianne.5 Desktop 3D printers now have many suitable applications, including producing accurate anatomic models for planning mandibular jaw resection and reconstruction.6

Many etiologies can lead to mandibular defects requiring reconstruction, including head and neck cancer, trauma, osteomyelitis, osteonecrosis and MRONJ.7–9 The reconstruction of mandibular defects is a challenge for any reconstructive surgeon and can have a dramatic impact on the patient’s esthetics, speech, occlusion, swallowing and psychosocial well-being. The main goals of surgical reconstruction of the mandible are to restore form and function as nearly as possible to the patient’s presurgical condition. The mandible in function and at rest is a complex interaction of adjacent structures and muscular attachments; as such, it is an extremely dynamic structure and its dynamic nature must be respected in reconstruction. A poor outcome can lead to chronic dysfunction, pain, poor patient acceptance and myriad other problems (Figures 1A and 1B). Successful mandibular reconstruction requires careful attention and meticulous preoperative planning, during which models made from desktop 3D printers can prove valuable tools.

Modern mandibular reconstruction methods utilize the concept of internal rigid fixation via the use of titanium plates and screws. In the past, plates were modified and adapted at the time of surgery through trial and error. Precise adaption of the fixation plate is essential in restoring the patient to presurgical form and function. Contouring and adapting the plate at the time of surgery is highly variable, and is influenced by the surgeon’s experience, available materials, and size of the anticipated defect. This process also subjects the patient to longer surgical time, longer general anesthesia and further blood loss, along with associated morbidities. Optimizing surgical time management can be advantageous, not only for financial reasons, but also for the patient’s health and welfare.10,11

Until recently, production of 3D surgical models required third-party outsourcing that led to increased costs and delayed turnaround time. Fabricating an anatomic model of the mandible using CBCT and a desktop 3D printer provides a more cost effective way to plan surgery. It also allows surgeons to review anticipated defects and areas of concern, and to preoperatively plan the placement and adaptation of reconstructive plates to optimize outcomes.10–12

A 75-year-old male was referred for dental clearance prior to initiating bisphosphonate therapy for metastatic prostate cancer and chronic pain. He was treated with extractions of nonrestorable teeth and cleared. During the next two years, he received eight treatments of zolendronic acid in conjunction with groselerin. The patient was lost to follow-up for two years, after which he was referred to the oral surgery clinic with a nonhealing wound distal to tooth #18 following a soft-tissue reduction procedure. A CBCT scan revealed generalized sclerosis of the mandible, with an area in the left-posterior mandible concerning for lytic lesion and possible metastatic disease versus stage I MRONJ.8 A follow-up medical-grade maxillofacial CT scan reported changes suggestive of bisphosphonate-related osteonecrosis in maxilla and left mandible. His initial management was conservative, as the patient was treated with suppressive doxycycline and aggressive oral hygiene using a water-irrigating device in the area of exposed bone. Areas of exposed bone on the maxilla eventually mucosalized, however; in time, the left mandible progressed and the patient presented to the emergency clinic with trismus and left pterygomandibular space abscess. The patient was taken urgently for incision and drainage of left pterygomandibular space abscess, marginal resection of the left mandible, and extraction of teeth #2 and #3 (Figure 2). This was completed without complication, and consultation with the infectious disease department recommended a prolonged course of antibiotics while the patient was planned for resection of the left mandible and area of MRONJ.

To plan for the mandibular resection, a preoperative CBCT scan and desktop 3D printer were used to construct a stereolithography model of the patient prior to the operation. The patient was positioned in the CBCT unit with the occlusal plane parallel to the image plane to minimize artifacts, ensuring an accurate anatomic reproduction and model. At least 2 cm above and below the area of interest (condyle and inferior border of the mandible) were included in the scan, with the patient in maximum intercuspation (Figures 3A through 3D).

Once the CBCT scan was completed, the digital image and communication in medicine (DICOM) data was saved and the anatomical data files (Figure 4) were imported to open-source software, where it was converted to highest resolution stereolithography (STL) format. This STL file was exported to the editing software so the image could be edited and refined prior to importing to the printer (Figure 5). The printer software was used to position and orient the model to verify support struts and avoid interferences to critical anatomic areas for the 3D printing process. This finalized STL file was printed using special dental resin. Simply stated, 3D imaging data is collected with the CBCT and the DICOM data is converted to an STL file; while in the STL format, the image can undergo editing and modification. The STL file is then suitable for use by the 3D printer (Figure 6).

After printing, the resulting model was removed from the build platform and rinsed in two baths of 91% isopropyl alcohol for a total of 20 minutes. Extraneous projections and support struts were removed with a laboratory carbide bur. Finally, the model was allowed to air dry and fully post-cured in a curing chamber.

The printed model and CBCT image were used to plan the surgery by identifying and marking the resection margins (Figure 7). Using a 2.8-mm angled reconstruction plate and the appropriate instruments, it was adapted to conform to the model spanning the anticipated area of surgical resection. Fixation screw placement was also planned and marked on the model, as was the screw length and thickness for each plate hole (Figure 8, page 12). The model and plates were bagged and sterilized for the upcoming procedure.

The patient was placed under general anesthetic (Figure 9). Through a transcervical approach, the mandible was exposed and the prebent plate was positioned in the predetermined location along the inferior border of the mandible. The plate fit precisely, and no additional adjustment was needed. The plate was indexed by drilling screw holes on the expected proximal and distal segments to ensure correct position of the segments and fixation of the plate after the resection. Next, the plate was removed and osteotomies anterior and posterior to the area of MRONJ were completed. The plate was repositioned onto the mandible and secured with three locking screws in the anterior and posterior segments utilizing the predrilled index sites (Figure 10). The remaining occlusion was assessed intraoperatively and found to be unchanged from preoperatively. The patient was sutured closed. Recovery proved uneventful (Figure 11). The preoperative occlusion was maintained and good facial symmetry and esthetics were achieved ­(Figure 12 and Figures 13A through 13C).

Until recently, due to the high cost of printers, 3D-printed models were only available through the services of a third-party manufacturer. From planning to delivery, this process could take several days to weeks. Today, in-office 3D desktop printing has advanced to the point of producing cost-effective models for clinical use, as described in this case report.

These 3D-printed models can be used for preoperative planning, surgical rehearsal and patient education. Hochman et al13 compared 3D models with cadaveric dissection in otolaryngology trainees. Participants found the 3D models to be an effective training instrument that improved confidence and operative performance. These models can reduce surgical time, decrease patient exposure to general anesthesia and improve surgical accuracy, leading to more predictable results and possibly reducing complications, recovery time and cost.2,12,14,15 Toro et al14 reported that 3D models used in complex mandibular reconstruction reduced surgical time by not having to approximate and repeatedly bend reconstruction plates intraoperatively. In addition, a review of the literature by Louvrier et al16 found the main advantages of 3D-printed models to be improvement in precision and reduction of surgical time. The average time to prebend a reconstruction plate on 3D models prior to mandibular resection was 0.42 hours.15 This was felt to represent the minimum amount of time saved during the operation. Considering that operating time has been calculated to cost between $47.5017 and $103 per minute,18 any time saved in the operating room can equate to significant cost-saving for the patient.

The disadvantages of in-office 3D printing are the startup cost of the printer and familiarization of the planning and design processes. The 3D printer used for this case study cost approximately $3500. The cost for the material is approximately $500 per 1000 ml; and, in this case, approximately 200 ml (or $100 worth) was used. Planning and designing the model from CBCT images can take from 30 minutes to an hour. The actual print time in this case was 20 hours, and processing to remove excess material and smooth rough surfaces took another hour. (Printing time and cost will vary, depending on the size and quality of the model desired.) The authors performed all of the procedures described in this case.

In the future, it is likely that auxiliary personnel could be trained to provide some of these printing and processing functions. While there is considerable up-front cost involved in desktop printing, the time devoted to design, print and finish the model helps improve treatment outcomes, reduces operating time, and provides a beneficial patient education and teaching instrument. The use of an SLA 3D model in this case study is a reminder of how progress in dentistry is technology driven. In the future, the cost of 3D printing technology will further decrease, planning and printing time will be reduced, and clinicians will invariably find more applications and solutions to address complex surgical challenges.

Featured image by BEDYA/ISTOCK/GETTY IMAGES PLUS 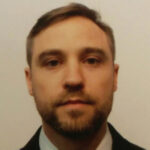 Logan C. Banner, DDS, MD, is a board-certified oral and maxillofacial surgeon practicing within the Michael E. DeBakey Veterans Administration Medical Center (VAMC) in Houston, where he provides full scope of oral surgery practice while working daily with residents. He is also adjunct faculty at the University of Texas School of Dentistry at Houston. He can be reached at logan.banner@va.gov. 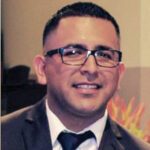 Eugenio Aquino, DDS, is a second-year resident at the Michael E. DeBakey VAMC Advanced Residency in Prosthodontics, and a post graduate student at University of Texas School of Dentistry at Houston. 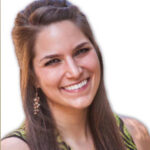 RACHEL BISHOP, DDS, is fourth-year resident in the University of Texas School of Dentistry at Houston Oral and Maxillofacial Surgery residency program.

John T. Dominici, DDS, MS, MSD, is a board certified prosthodontist and endodontist practicing within the Michael E. DeBakey VAMC. He is also an adjunct associate clinical professor at the University of Texas School of Dentistry at Houston. The authors have no commercial conflicts of interest to disclose.

Use of Locally Delivered Antimicrobials in Periodontal Therapy

Dental Aerosols and Spatter Amidst COVID-19