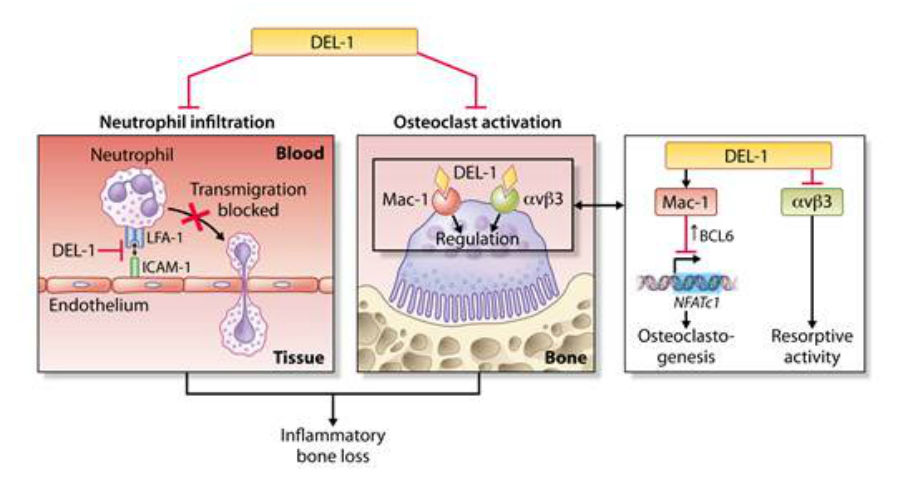 The American Academy of Periodontology reports that periodontitis affects more than 60 million Americans. In an effort to find new ways to reduce the risks posed by periodontal disease, researchers at the University of Pennsylvania (Penn) School of Dental Medicine in Philadelphia investigated the ability of a naturally occurring protein found in the body, Del-1, to inhibit alveolar bone loss.

The researchers discovered that Del-1 inhibits bone loss by limiting the activity of osteoclasts, the cells that absorb bone tissue. Their discovery — published in the paper, “Del-1 Restrains Osteoclastogenesis and Inhibits Inflammatory Bone Loss in Nonhuman Primates,” appearing in September in Science Translational Medicine — may lead to new interventions to treat periodontitis and other diseases. “This is not just important for periodontitis,” notes George Hajishengallis, DDS, PhD, lead author and the Thomas W. Evans Centennial Professor in the Department of Microbiology at Penn School of Dental Medicine. “It could also have implications for other inflammatory diseases where bone loss is involved, such as osteoporosis and rheumatoid arthritis.”

This research springboards off of previous studies that have demonstrated the importance of Del-1 in inhibiting the movement and accumulation of neutrophils in gingival tissue in mice. The team has also found a similar mechanism that may reduce inflammation in the central nervous system.