The Power of Genetic Surveillance

Within a few months of isolating the original COVID-19 virus, several successful vaccines had been developed that were granted emergency use authorization for distribution in the United States.

Within a few months of isolating the original COVID-19 virus, several successful vaccines had been developed that were granted emergency use authorization for distribution in the United States. This was possible because scientists were able to rapidly and accurately sequence the virus’ genetic code. The technology responsible for this unparalleled success was based in large part on techniques developed during the Human Genome Project.

This project recorded the entire genetic sequence of a single human being for the first time in the early 2000s. It took 13 years and cost approximately $3 billion. Currently, an individual’s genome can be sequenced in a few hours at a cost of around $1000. Sequencing machines continue to get faster and cheaper, and complete sequencing for $100 is on the horizon. The ability to identify and modify the human genome has been discussed in this space previously. A positive attribute of quick sequencing is the prospect of repeated use of the technique over an individual’s lifetime. This application will lead to an era of personalized medicine and lifestyle advice tailored to fit each individual’s genetic strengths and vulnerabilities.

Obviously, the advent of this technology has been extremely useful in the fight against the COVID-19 pandemic. A recent article in The New York Times Magazine detailed how rapid sequencing has been successfully applied to the current outbreak. Within days of isolating the original virus, the genetic sequence of SARS-CoV-2 had been determined. This information was used to develop the vaccines currently available. An additional benefit was the DNA sequence was computerized, which, in some cases, allowed vaccine development without ever physically having the virus in the laboratory. It became merely another digital data puzzle to solve.

This rapid processing has led to the possibility of stopping or slowing the spread of other diseases — both now and in the future. The process has been labeled genetic surveillance, and portable genetic sequencers are now in routine use. At least one machine, available since 2015, can be used to sample and sequence viruses. It sells for less than $1000 and is smaller than a smartphone. This technological breakthrough has been compared to the invention of the microscope.

It is well known that viruses produce variants every few weeks, and we have seen how SARS-CoV-2 variants are making herd immunity more and more difficult to achieve. The use of early and widespread genetic sequencing — combined with preventive efforts, vaccinations, and early diagnosis and treatment — could be the difference between a small disease outbreak and the next global pandemic.

Oral Health Considerations for Patients With Down Syndrome 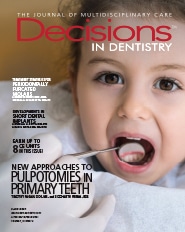