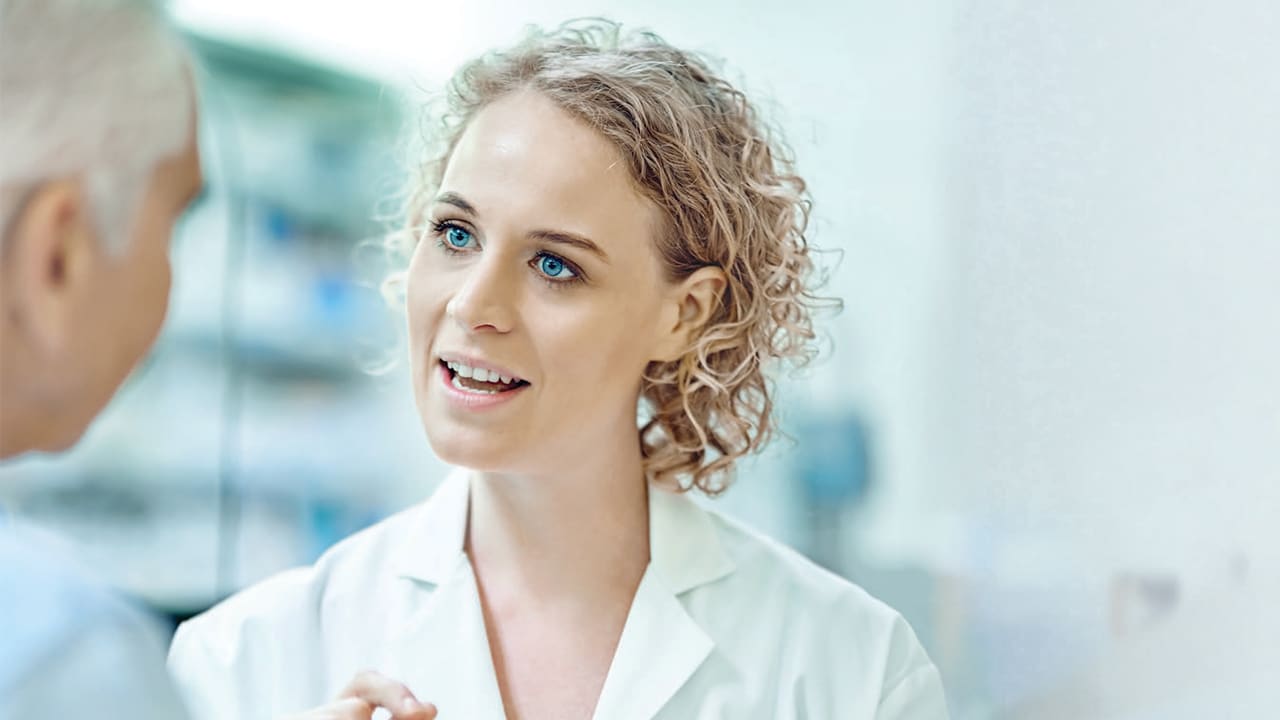 According to the most recent statistics, more than 52,000 Americans died from drug overdoses in 2015, the most ever; of these, 33,091 cases (63.1%) involved opioids.1 In August 2016, the U.S. Surgeon General Vivek H. Murthy, MD, MBA, sent a letter to all health care providers regarding America’s opioid epidemic. He asked clinicians to take a pledge to build a national movement designed to accomplish three goals. First, educate providers to treat pain safely and effectively. Second, screen patients for opioid use disorder, and provide or connect them with evidence-based treatment. Third, shape how the rest of the country sees addiction by talking about and treating it as a chronic illness, not a moral failing.

One of the core qualities of a successful dental practice is appropriate pain management. But which drugs are best for treating acute dental pain? If clinicians were to ask, patients might expect a prescription-strength pain medication (usually an opioid) following any dental procedure that involves potentially significant postoperative pain. Because patient satisfaction is a primary concern for dentists, not prescribing an opioid pain medication could cause dissatisfaction among certain patients and lead to negative reviews or critical postings on social media sites. These unwarranted reports are in the public domain and can result in loss of referrals from other patients and practitioners.2

Clinicians should acknowledge, however, that although patients may assume they will receive an opioid pain medication following surgery, some might welcome the suggestion of alternative medications. A simple conversation may lead to a mutual decision to try a nonopioid pain management regimen first. The “take a prescription and fill it only if you need it” strategy is a viable approach in managing acute postoperative pain, especially now that almost all opioid-containing analgesics are classified as Schedule II drugs by the U.S. Drug Enforcement Administration. The patient is required to provide the pharmacy with a written or electronic prescription so these Schedule II medications can no longer be called in (except under specific conditions). Refills for Schedule II prescription medications are also prohibited. 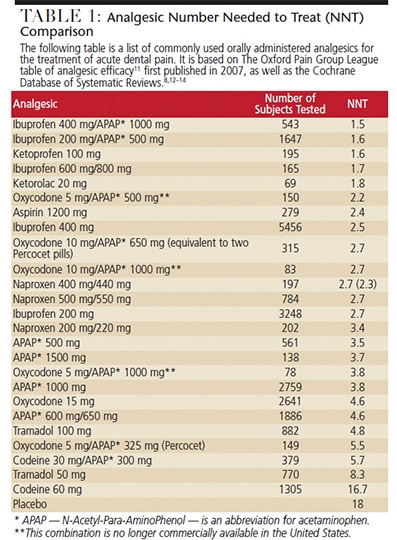 It is disconcerting that the United States consumes 99% of the world’s hydrocodone/acetaminophen combinations.3 Many patients’ first experience with an opioid may coincide with a dental procedure, such as the extraction of wisdom teeth. It is estimated that almost two-thirds of 14- to 17-year-olds receive opioid prescriptions from dentists following third-molar extractions.4 It is common for clinicians to prescribe three to 10 days of postoperative opioid pain medications following dental surgeries. Surprisingly, there are no references or research on the effectiveness of hydrocodone as a pain medication (Table 1).

As health care professionals, dentists can change this view within clinical practice and keep patients satisfied and comfortable by looking at the scientific evidence. Traditionally, oral health professionals have been taught that nonsteroidal anti-inflammatory drugs (NSAIDs) and acetaminophen should be used for mild-to-moderate pain, and opioids prescribed for severe pain. There is, however, no scientific evidence to support this recommendation. In fact, the evidence indicates that NSAIDs are more effective than opioids for severe pain.5 An even better option may be the combination of acetaminophen and NSAIDs because the site of action of acetaminophen differs from that of NSAIDs. Therefore, the analgesic effect of acetaminophen is considered synergistic when combined with NSAIDs (Table 2). 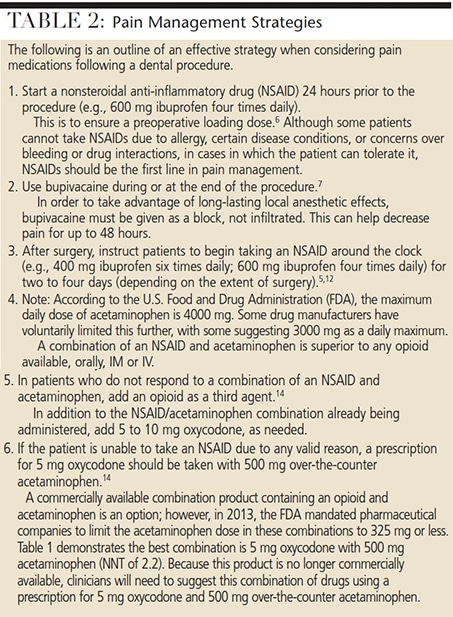 Most of this information has been available for years. As early as 1989, Jackson et al6 examined various studies utilizing ibuprofen preoperatively. Their conclusion was that 400 mg to 800 mg of ibuprofen administered approximately 30 minutes before dental surgery is effective in alleviating postoperative pain. In 2002, Gordon et al7 showed that the use of bupivacaine led to less postoperative pain for two days following dental surgery.

A review article by Moore and Hersh5 addressing the treatment of dental pain following wisdom tooth extraction concluded that 325 mg of acetaminophen taken with 200 mg of ibuprofen provides better pain relief than any oral opioids combination. They concluded, “The results of the quantitative systematic reviews indicated that the ibuprofen-acetaminophen combination may be a more effective analgesic, with fewer untoward effects, than are many of the currently available opioid-containing formulations.”

The literature supports the claim that use of NSAIDs — plus acetaminophen as needed — with bupivacaine local anesthesia is an effective regimen for preventing and managing postoperative pain in dental patients.

When considering the effectiveness of postoperative analgesics, it is important to understand one of the statistical measures used in clinical studies: the number needed to treat (NNT). This is calculated for the proportion of patients with at least 50% pain relief over four to six hours, compared with a placebo in randomized, double-blind, single-dose studies in patients with moderate-to-severe pain. Clinically, 50% relief of pain is considered effective treatment, allowing people increased functional abilities and an improved quality of life.8 When considering NNT, the question becomes, how many people must be treated with a certain dose of a medication for one person to receive effective pain relief? 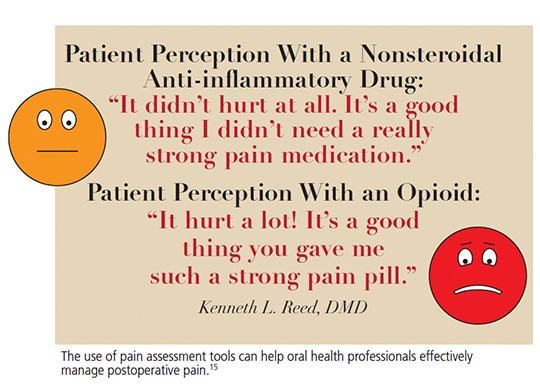 Concerns over what has been described as America’s opioid abuse epidemic have led to professional discussions on opioid prescriptions in dentistry. The American Dental Association’s Statement on the Use of Opioids in the Treatment of Dental Pain,9 for example, offers recommendations for pain management. Among these, it suggests that clinicians consider a patient’s possible history of substance abuse as part of the medical/dental history, and “recognize multimodal pain strategies for management for acute postoperative pain as a means for sparing the need for opioid analgesics.” It also notes that NSAIDs should be considered as a “first-line therapy” for acute pain management.

Dentists seek to provide optimal care for patients, and pain management is a top priority. Critically examining the literature concerning common pain medications used in dentistry can help practitioners find ways to ease acute dental pain in a safe and effective manner. Considering alternatives to prescription opioids is a prudent step that, when indicated, may relieve postoperative pain, while also helping to shape patient perception about the use of nonopioid pain medications.

The authors have no commercial conflicts on interest to disclose.

Featured photo by CECILIE_ARCURS/E+/GETTY IMAGES PLUS