Researchers Identify Genes That May Cause Periodontal Disease

In a major step toward developing a targeted, individualized approach to prevention and treatment, researchers have identified 41 master regulator genes that may cause periodontal disease.

In a major step toward developing a targeted, individualized approach to prevention and treatment, researchers have identified 41 master regulator genes that may cause periodontal disease. Led by Panos N. Papapanou, DDS, PhD, of Columbia University College of Dental Medicine in New York, the team reverse engineered gene expression data to build a map of genetic interactions that lead to periodontitis. The research identified individual genes that appear to have the most influence on the disease process. As Papapanou explains, “This allowed us to focus on the handful of genes that represent the most important players in the process, rather than the entire transcriptome.”

The study, “Identification of Master Regulator Genes in Human Periodontitis,” was published in the Journal of Dental Research. The data will allow researchers to develop compounds that interrupt the genes’ action and create therapies that can prevent or treat periodontal disease in its earliest stages. The next phase, he notes, is to “validate these master regulators in the lab before we test the genes in experimental models.” 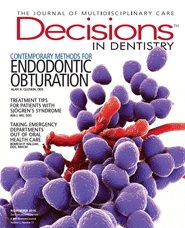