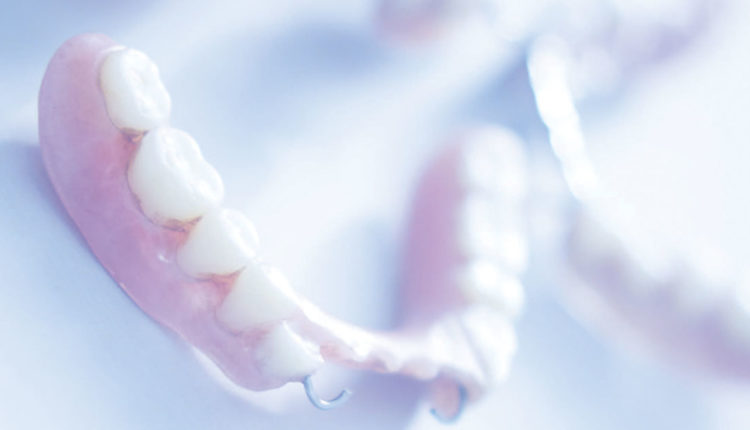 This case report presents a patient for whom interim removable partial dentures replacing maxillary and mandibular anterior teeth were fabricated based on digital intraoral imaging.

Technological advances, such as computer aided design/computer aided manufacturing (CAD/CAM) and digital intraoral imaging, are changing nearly all aspects of restorative dentistry. In regard to crown and bridge fabrication, studies have now reported that digital impressions are equal to — or more accurate than — conventional impressions made with elastomeric materials.1–3 Moreover, the master models fabricated with sequential layering of a polymer resin, called stereolithography (SLA) or three-dimensional (3D) printing, were verified to be as accurate as stone models fabricated from conventional impressions.4,5

While making impressions is the first step to fabricate an intraoral appliance, some patients who have teeth exhibiting Class 3 mobility express concerns about the loss of teeth from impressions made using traditional elastomeric materials. As intraoral digital imaging allows operators to make the impression without applying elastomer around teeth, the impression can be obtained in a manner that avoids the unintentional extraction of periodontally compromised anterior teeth. This clinical report presents a patient in whom interim removable partial dentures replacing maxillary and mandibular anterior teeth were fabricated based on digital intraoral imaging.

A 63-year-old female presented to the general practice clinic at the University of Maryland School of Dentistry in Baltimore complaining that her “front teeth were very loose.” She had previously been diagnosed with hypertension, hypothyroidism and rheumatoid arthritis. The patient was taking lisinopril for hypertension, levothyroxine for hypothyroidism, and hy­droxy­chloro­quine for rheumatoid arthritis. Her medical history and medications did not pose contraindications for dental procedures. She presented with multiple missing teeth, se­vere periodontitis, and Class 3 mobility in multiple teeth.

The prognosis for the two maxillary lateral incisors, as well as the two mandibular central incisors, was deemed hopeless.14 Therefore, extraction of these teeth was recommended. As the treatment plan called for several anterior teeth to be extracted, interim partial removable dentures were offered. The patient expressed concerns, however, about losing teeth from making alginate impressions to fabricate the interim partial prostheses. A digital impression was suggested as an alternative technique.

A full-arch digital impression of the maxilla and mandible was made with an intraoral scanner (Figures 8 and Figure 9). Special attention was paid to capturing the palate (Figure 8). A digital buccal interocclusal record was made to articulate the maxilla and mandible (Figure 10). The digital impressions were then sent electronically to an outside laboratory to fabricate 3D-printed resin casts. The clinical team requested unaltered resin master casts in order to estimate the dimension of residual ridge after extraction of the teeth.

After the resin master casts were received from the laboratory, the two maxillary lateral incisors and mandibular central incisors were carefully removed from the resin master casts utilizing an acrylic bur. A thin layer of petroleum ointment was applied to the casts. Next, the interim maxillary and mandibular partial prostheses were fabricated at the in-school laboratory utilizing pink acrylic resin and denture teeth (Figures 11 through 13).

The occlusion was checked to ensure no alterations were made to the patient’s interocclusal relationship in maximum intercuspal position. After the intaglio surfaces and clasps were adjusted at the delivery, the fitting of the interim removable prostheses was deemed clinically acceptable. Adjustment for the interim dentures was performed one time after delivery of the interim prostheses.

That noted, the use of a digital workflow in fabricating removable partial dentures offers potential benefits. Digital scanning captures the soft tissues located in edentulous areas in a passive state.9 Patients who have a tendency to gag during conventional impression procedures, as well as those with special needs or dental anxiety, should tolerate the intraoral scanning process better than having a conventional impression made with elastomeric materials. The digital impression technique worked well in the Kennedy Class III case presented here, as the need to capture border-molded extensions of the soft tissue was not critical with this patient.10

A nonadhesive agent, such as petroleum ointment, must be applied when resin-based removable prostheses are fabricated on the resin casts made from SLA. Even though an autopolymerizing polymethyl methacrylate denture base material was used, the interim dentures were still placed in a hot water bath after the initial polymerization in order to improve the degree of resin cure. The patient used the maxillary interim removable prostheses for eight months until a maxillary cast partial prosthesis was delivered to replace the maxillary right and left lateral incisors, maxillary left canine, and the maxillary left first molar. As the patient was satisfied with the mandibular interim prosthesis replacing two mandibular incisors and with the first molar occlusion (Figure 11 and Figure 13), she decided not to make a mandibular cast partial prosthesis.

This clinical report describes how digital intraoral impressions can be used to fabricate interim partial prostheses and avoid the unintended extraction of hopeless teeth upon removal of a conventional elastomeric impression.

Se-Lim Oh, DMD, MS, is a clinical associate professor in the Department of Advanced Oral Sciences and Therapeutics at the University of Maryland School of Dentistry in Baltimore. She can be reached at [email protected]du

Gary D. Hack, DDS, is an associate professor in the Department of Advanced Oral Sciences and Therapeutics and serves in the department’s Division of Prosthodontics at the University of Maryland School of Dentistry.

Sammy Gurman, DDS, is a postgraduate orthodontic student at the University of Colorado School of Dental Medicine.

Cindy Idzik-Starr, DDS, is a clinical assistant professor in the Department of Oral and Maxillofacial Surgery at the University of Maryland School of Dentistry.

Questioning the Safety of Generic Drugs

Update on the Oral-Systemic Link 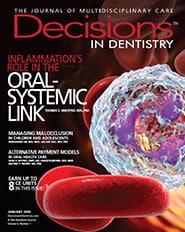