Last November, experts from around the world met under the auspices of the American Academy of Periodontology and European Federation of Periodontology to revisit the classification of periodontal and peri-implant diseases and conditions.

Last November, experts from around the world met under the auspices of the American Academy of Periodontology and European Federation of Periodontology to revisit the classification of periodontal and peri-implant diseases and conditions (the complete proceedings can be found at perio.org/2017wwdc). By way of background, the last large attempt at this process was undertaken almost 20 years ago.

Among the findings was that bleeding on probing and color change are the primary clinical indications of gingivitis. It was stated the vast majority of gingivitis is associated with dental biofilm. A distinction was made between gingivitis found in patients with a previously healthy periodontium and individuals with gingivitis found after successful treatment for periodontitis. This second group, it was emphasized, requires maintenance for as long as they have teeth to prevent recurrence of periodontitis.

Chronic or aggressive periodontitis are now placed under one entity termed periodontitis. Other forms include necrotizing periodontal diseases and periodontitis as a manifestation of systemic diseases. The most common form is broken down into stages and grades, based on clinical presentation and rate of progression.

How does the new system affect daily practice? We all have patients who have been treated for periodontitis and become compliant to suggested oral hygiene and maintenance. The majority of these individuals remain stable over time. This new classification allows clinicians to separate this group from individuals who have rapid progression of disease. The latter demand specialized attention and warrant evaluation for possible systemic modifiers and advanced therapeutics.

Unfortunately, these reports do not give specific definitions of the various stages and rates of progression. This will undoubtedly create confusion. In addition, the new approach assumes that individual diagnoses will only be made after following patients for some time. But when a new patient presents, how does a clinician know if the individual has controlled periodontal disease or is experiencing rapid progression? This makes it difficult to determine treatment. Do we place the individual who later is diagnosed with Stage III/Grade C disease in maintenance to determine the rate of progression? And, if so, do we endanger his or her dentition? At present, the answer is unclear.

Ultimately, is it necessary for clinicians to understand these definitions? Absolutely. Such understanding will lead to improved therapy. Second, from an operational standpoint, it’s a safe bet dental insurance companies will quickly adopt the new periodontal classification guidelines.

Collaborative Management of Anterior Esthetics in an Implant Patient 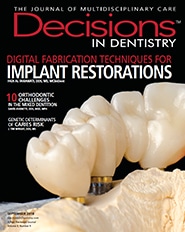