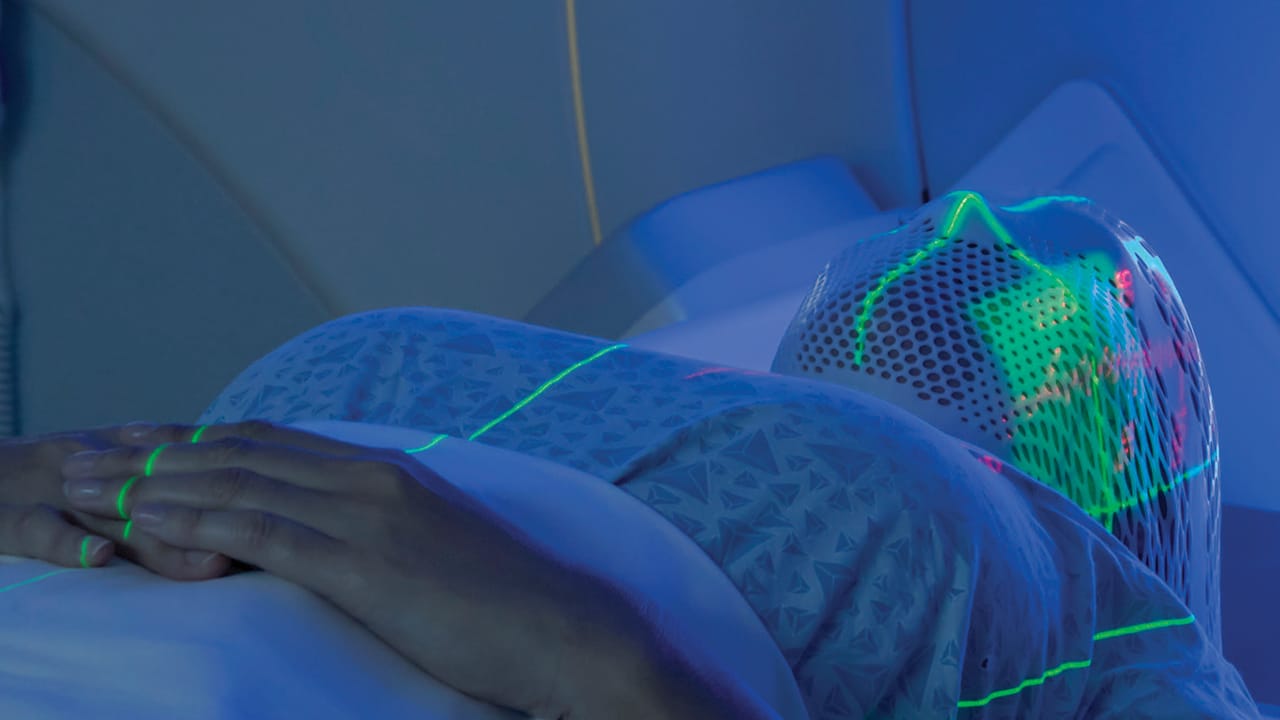 Because there are no universally accepted guidelines for managing this patient population, clinicians must look to the evidence when formulating a treatment plan.

By Donita Dyalram, DDS, MD, FACS On Dec 11, 2017
0
Share
Because there are no universally accepted guidelines for managing this patient population, clinicians must look to the evidence when formulating a treatment plan

Patients with head or neck cancer embark on a long road to recovery following initial treatment. Individuals with oral cavity cancers are primarily treated with surgery, and, if they meet the criteria for radiation, they receive six weeks of radiation therapy. Patients with oropharyngeal cancer are typically treated initially with radiation, and possibly chemotherapy. Regardless of the location of the tumor, all of these patients are at risk for osteoradionecrosis (ORN) following radiation therapy. This condition is defined as exposed necrotic bone for greater than three months in an area previously subjected to radiation therapy.

The incidence of ORN has been reported to be 5% to 15%, however, newer techniques — such as intensity modulated radiation therapy, brachytherapy, three-dimensional conformal radiation therapy and stereotactic radiation therapy — have decreased the rate to 6% or less. In terms of radiation exposure, gray (Gy) is the unit of absorbed dose and has replaced the old term rad; 1 Gy is equal to 1 Joule per kilogram or 100 rads. The risk factors for ORN are proximity of the tumor to the mandible (especially the posterior mandible), radiation (i.e., field size, dosage > 60 Gy), chemoradiotherapy, poor dentition, poor oral hygiene, advanced tumor stage, and oral trauma (such as extraction or ill-fitting dentures).1 When comparing dentulous and edentulous patients, it was found that, overall, dentate patients had a higher risk of ORN (24%) than edentulous patients (14%) — and the risk increases in patients who received greater than 75 Gy.2

These patients typically present with exposed bone and inflamed, friable tissue — with or without purulent drainage. This can progress to oroantral fistulas, orocutaneous fistulas, pathologic fractures and numbness of the lips. The soft tissue will show evidence of fibrosis, with little elasticity, making primary closure of extraction sites difficult. These individuals also have fibrosis of the muscles, leading to trismus, and therefore making oral hygiene and dental care difficult.

On a panoramic radiograph, the affected area will have a diffuse radiolucency, without any sclerotic demarcation. Computed tomogram scans and, in some cases, magnetic resonance imaging help clinicians evaluate the full extent of the jaw affected by ORN (Figure 1, Figure 2 and Figure 3).

Bones are resistant to ORN as long as there is healthy, intact soft tissue. Scarborough4 described three factors in the pathogenesis of ORN: exposure of radiotherapy above a critical dose, local injury, and the development of infection. Studies in rhesus monkeys by Gowgiel5 showed vascular changes in the field of radiation that were seen as early as 1.5 weeks into radiation treatment. He suggested the difference in incidence of ORN in the maxilla and mandible was due to the vascular supply to these bones; the mandible, with its centrally located inferior alveolar vessels, compared to the maxilla, with its rich vascular plexus. In 1970, Meyer6 postulated a triad of radiation, trauma and infection as the pathogenesis of ORN. Later, Marx7 proposed that, rather, it was the hypovascular, hypoxic and hypocellular environment that resulted in poor healing and the development of ORN. This was the accepted theory of the pathogenesis of ORN for decades, and led to hyperbaric oxygenation (HBO) as the treatment for prevention and management of ORN.

Today, Marx’s theory on the genesis of ORN has been challenged by the fibroatrophic theory,8 which suggests the osteocytes are damaged by free radicals from the radiation therapy, and this leads to inflammation and, thus, chronic activation of fibroblasts. Essentially, this chronic inflammatory state — the prefibrotic phase — leads to the organized fibrosis phase (areas of fibrosis in a poorly organized matrix). In the late fibroatrophic phase, this area is acellular and fibrotic — and with a dense matrix, the site’s ability to heal is compromised.

The use of HBO for patients with ORN undergoing dental extractions and implant placement has been accepted for decades. It was the protocol that patients receive 20 dives prior to surgery, followed by 10 dives after. Does this therapy provide additional benefits for patients? Multiple studies have been conducted to test the validity of hyperbaric oxygenation. In a multicenter study called the ORN 96 trial, patients were randomized into two arms: one arm received HBO and the other a placebo. Patients with ORN were subjected to 30 dives at 2.4 atmospheres for 90 minutes, followed by 10 dives. It was found that after one year, 19% of the subjects who received HBO experienced improved outcomes, whereas 32% of the placebo group showed improvement. The study was subsequently closed early due to these preliminary results.9 While there are numerous papers in the literature, there is only one randomized trial of HBO use in ORN treatment, and other articles are Level 2 (retrospective chart review and outcome data) evidence.10 There is no clear evidence in the literature that HBO is effective in the treatment and prevention of ORN.11 A Cochrane review of patients receiving dental implants concluded there is no evidence for or against the effectiveness of HBO in improving dental implant outcomes in radiated patients.12

Various studies have reported 10% to 100% resolution of symptoms after simple, conservative therapy. When treating patients who are suspected of having ORN, the possibility of recurrent disease must always be ruled out. These are cancer patients and, despite being treated, there is a possibility of recurrence. Verification can be done with a biopsy of the affected site. Once recurrence has been ruled out, treatment can proceed.

There are no universally accepted guidelines for the treatment of ORN today, and protocols for HBO that were once accepted as the standard of care in managing ORN are no longer recommended.

Proponents of the fibroatrophic theory use two oral medications to help manage ORN. A patient can take 800 mg of pentoxifylline and 1000 IU vitamin E at least two weeks prior to a procedure, and complete a two-month course of this regimen. In a study by Delanian et al,13 this therapy reportedly helped. Vitamin E (alpha-tocopherol) is an antioxidant that scavenges free radicals generated during oxidative stress. Pentoxifiylline has been used for the management of vascular disorders, such as intermittent claudication, and has anti-inflammatory mediators, such as TNF-α.

In addition to these medications, for early stage ORN, the dentist could consider surgical debridement; and passive closure following the surgical procedure is obligatory. The patient may require oral antibiotics whenever there is an overlying infection. At times, it is difficult to obtain primary closure, and wound dehiscence is common because the soft tissue is contracted from the frequent infections and fibrotic from the radiation. If the wound is left open, the patient should be counseled in proper oral hygiene and counseled to have patience. With time, a sequestrum will form and can be easily removed, leaving healthy granulation tissue beneath.

Unfortunately, some patients will progress to Stage III ORN. For these individuals, complete resolution of pain, infection and exposed bone can only be accomplished by using free vascularized tissue to rebuild and replace the damaged jaw and missing soft tissue (Figure 4 and Figure 5). These are lengthy surgeries, followed by long hospital stays and prolonged rehabilitation — with the majority of these patients requiring gastric feeding tubes.

Dental providers should understand it is possible to successfully extract teeth and place dental implants in patients who have previously received radiation therapy. However, the risks and benefits of these procedures need to be thoroughly discussed — and informed consent obtained — before providing therapy. This is important because the sequelae to tooth extraction or implant placement often brings negative results. As Cannady et al14 note, “The psychological impact of surviving cancer, only to be handicapped by the treatment sequelae, can be crippling.”

As oral health professionals, treating patients who have had radiation therapy can prove challenging. These patients have survived a momentous hurdle in their lives, and fear of cancer recurrence always lurks in the back of their minds. The controversies surrounding the genesis of ORN pose a dilemma when caring for this patient population. When formulating a treatment plan, clinicians must look to the evidence and outcomes in the literature — and counsel patients that therapy is not a sprint but, rather, a marathon.

Donita Dyalram, DDS, MD, FACS, is an assistant professor and associate program director of the Department of Oral and Maxillofacial Surgery residency training program at the University of Maryland Medical Center in Baltimore. She is also one of the core faculty in the Head and Neck Oncology/ Microvascular Reconstruction fellowship training program, as well as a course director and faculty adviser. Dyalram was recognized with the Faculty Educator Development Award by the Oral Maxillofacial Surgery Foundation, and is board certified by the American Board of Oral and Maxillofacial Surgery. She can be reached at [email protected] 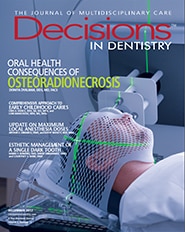