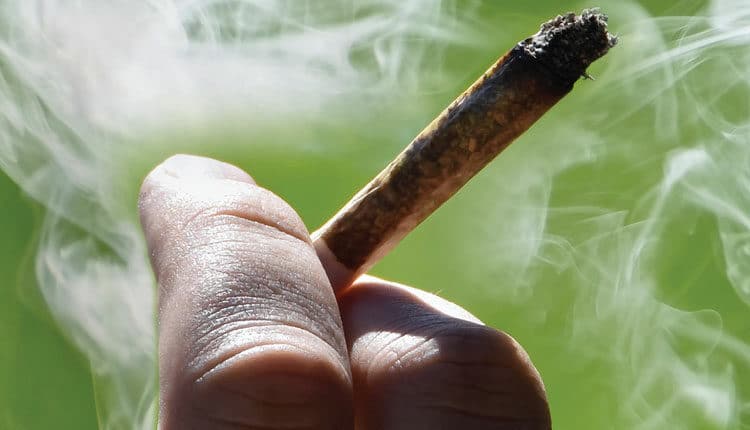 Marijuana Use and Concerns for Dental Providers

By H. Dexter Barber, DDS and John R. Francis, DDS, MS On Aug 9, 2022
0
Share
PURCHASE COURSE
This course was published in the August 2022 issue and expires August 2025. The authors have no commercial conflicts of interest to disclose. This 2 credit hour self-study activity is electronically mediated.

There has been an increase in the use of marijuana, or cannabis, in the United States coinciding with the increasing number of states that have legalized it for medical and/or recreational purposes (Figure 1 and Figure 2).1,2 As a result, there has been a corresponding rise in the negative health consequences associated with its use. As such, dental providers should be prepared to recognize the oral and systemic manifestations of cannabis consumption.3 This article will examine marijuana’s health effects, and how the practicing dentist might best manage this patient population.

Marijuana use and exposure have increased over the years, and since its legalization in many states, one must wonder about its increased effects on public health. In states where the legalization of marijuana now shows over 20 years of documentation, the detrimental effects of marijuana exposure are coming forth.4,5 For the period of 2004 to 2013, marijuana-related calls to the Rocky Mountain Poison and Drug Center rose 56%, with marijuana exposure ranking second only to alcohol calls. In that same report, marijuana-related treatment admissions of abuse and dependency, as well as related arrests, also show a drastic increase.4

While this article will summarize the effects of cannabis on oral health and implications for dental practice, this area is not without its contradictions. There are too many contributing factors — such as age, oral hygiene practices, tobacco smoking, and socioeconomic factors — that may also play a part and muddy the waters. But most reports show a negative relationship with cannabis use and oral health.6

PHARMACOLOGY AND USE OF MARIJUANA

Marijuana originates from the plant Cannabis sativa, and there are active chemicals found within the cannabis called cannabinoids.7 The three major cannabinoid types are delta-9-tetrahydrocannabinol (THC), cannabinol, and cannabidiol.6 Of these three, THC is the most abundant.6,7 An active chemical within the cannabinoids is responsible for the relaxation associated with the use of this drug, as well as the feeling of euphoria.7 A maximum plasma concentration of inhaled THC can occur in only a few minutes; however, it could take 30 to 90 minutes when orally ingested.7 Because of the long half-life of THC, marijuana can be detected months after it was last used.7,8

Before the legalization of marijuana in many states, cannabis was the most widely used illegal drug world­wide.8 And in the United States, cannabis use in youth surpassed that of tobacco in the early 2000s.9 As of this writing, 37 states, plus the District of Columbia, have legalized medical marijuana, and 19 states, plus the District of Columbia, have legalized recreational marijuana.10 The expectation is these numbers will increase as more states legalize medical and/or recreational use.1 In light of these developments, a key consideration for dentists is that older adults are the fastest growing segment of marijuana users, and these individuals tend to present with a high prevalence of oral disease.11

Cannabinoid receptors can be found in oral epithelial cells and may be involved in the different side effects seen with marijuana smoking.5 The result of cannabis smoking can lead to xerostomia, caries and periodontal disease (Figure 3). The negative effects of chronic marijuana smoking on the periodontium can include gingival hyperplasia, gingival leukoplakia and bone loss.6 There is direct toxicity to important cells of the periodontium and immune disruptive properties, as well.12

In addition, data from the National Health and Nutrition Examination Survey support an association between marijuana smoking and periodontal disease.13 In animal models, exposure to marijuana smoke for just eight minutes a day over 30 days was sufficient to cause periodontal bone destruction.12 Another point to consider is that THC, the main psychotropic agent in cannabis, is a powerful appetite stimulant.14 This fact, coupled with the dry mouth-inducing properties of marijuana smoking, creates an ideal situation for the formation of caries. Other oral manifestations of marijuana use include oral papilloma, uvulitis, and squamous cell carcinoma in heavy-use smokers.15–17

CONCERNS FOR THE TREATING DENTIST

Recommendations in these situations include instructing the patient not to use cannabis for at least a week before the next dental appointment. Specific cardiac emergencies associated with marijuana toxicity include ventricular tachycardia, atrial fibrillation and acute cardiac ischemia. Multiple studies have reported a clear link between marijuana use and myocardial infarction.22–25 Other vascular complications associated with cannabis includes peripheral arteritis, stroke, congestive heart failure, angina, and increased systolic blood pressure.22 Although some dentists may feel uncomfortable asking patients about the use of marijuana and when they last used marijuana, the answers to these questions could prevent a medical emergency in the dental office.7,20 Table 1 presents a sample cannabis use questionnaire that can be utilized in clinical settings.

Because of the oral manifestations noted previously, the dentist should be concerned about head/neck and oral cancer screening, and a referral to specialists for evaluation and biopsy of suspicious lesions should be recommended. In addition, due to the significant periodontal effects associated with marijuana use, the dentist should also consider more frequent hygiene maintenance appointments, and even surgical or nonsurgical periodontal care when indicated. 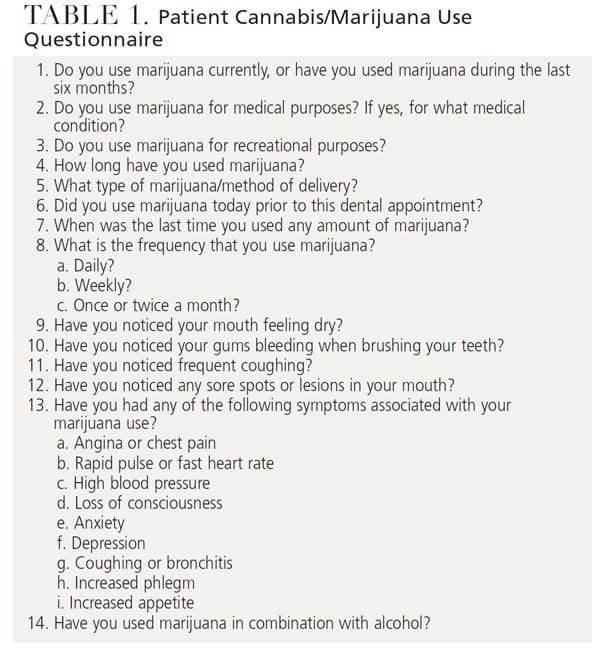 Not all reports find a negative correlation with oral health and cannabis use. Some published studies show a therapeutic reaction of cannabis on the dental pulp,26 and others conclude that marijuana use may exert potent antibacterial activities.27 Marijuana smokers may also present with compounding habits, such as concomitant use of tobacco and suboptimal oral hygiene, which further complicate research results. Yet the overriding effects of cannabis on the oral cavity appear to be negative.

There are specific cannabis receptors in the oral cavity which result in negative consequences when the mouth is affected by marijuana use. As noted, xerostomia, increased caries, gingival hyperplasia, and even periodontal bone loss are all common outcomes.7

As the number of individuals using marijuana continues to rise, either for medical or recreational purposes, dentists must understand this drug’s oral and systemic manifestations. Knowledge of its oral presentations is critical to patients’ overall oral health, and, more importantly, periodontal health and oral cancer risk. The systemic manifestations are wide ranging and can be life-threatening, especially with chronic users and acute toxic-level users. As has been advocated, creating a dental practice protocol or policy regarding the use of cannabis is strongly recommended by many authors.3,28–30 This policy might also include not treating any patient who is under the influence of marijuana, and this should be explained in detail to patients and the dental team. 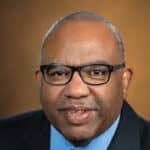 H. Dexter Barber, DDS, is a clinical assistant professor at Midwestern University College of Dental Medicine in Glendale, Arizona. An oral and maxillofacial surgeon, he is a diplomate and past president of the American Board of Oral Implantology. He can be reached at [email protected]. 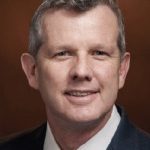 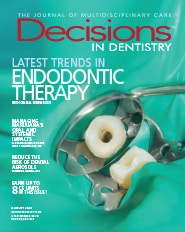