Impact of the Information Tech Economy

An op-ed appearing in The Wall Street Journal, “The Challenge of Our Disruptive Era,” written by Ben Sasse, a Republican senator from Nebraska, suggests the state of the U.S. economy should be taken in a historical context.

An op-ed appearing in The Wall Street Journal, “The Challenge of Our Disruptive Era,” written by Ben Sasse, a Republican senator from Nebraska, suggests the state of the U.S. economy should be taken in a historical context. It is his contention that our society has been in a turning point in history for the last 20 to 30 years, and this cycle will continue for the next two or three decades. Sasse argues this cycle is historically unique because it represents the largest economic disruption in recorded human history. First, there were hunter-gatherers; this was followed by the agricultural and industrial economies. Although the current cycle has no official name, it is sometimes referred to as the information technology economy.

Sasse contends this cycle will eliminate the vast majority of current jobs. He points out that in the industrial economy, people fled from the farm to the city, where they eventually found employment. Traditionally, a job would last for the working life of the individual. Suggesting this era has run its course, he theorizes that individuals now entering the job market who receive training in their 20s will quickly discover that in order to remain employed, they will need to retrain for other positions. The editorial notes that our government is lagging far behind these social and economic changes. In order to meet these challenges, he says we must start a national conversation about changing the delivery of education and availability of job retraining resources.

ARE THESE DEVELOPMENTS SIMPLY ANOTHER SIGN POINTING TOWARD THE DIMINISHING MIDDLE CLASS AND SOCIAL DISRUPTION?

In light of the current political polarization, Sasse argues the reality is that neither extreme has the answers to the questions posed by today’s society. He also notes that our national debt — combined with future monetary obligations, including Social Security and Medicare — will force dramatic changes.

So, are these developments simply another sign pointing toward the diminishing middle class and social disruption? Not so, he says. Sasse is positive that Americans and the American spirit can meet and overcome the growing national debt and vagaries of the current cycle.

How does this relate to dentistry? The good news is that for the foreseeable future, oral health professionals should be able to continue to practice. Why? Because there are millions of patients who need our services, and the training, diagnostic and clinical skills required of our profession cannot be readily replaced. In addition, it’s likely that, at some point, larger numbers of patients will be covered by government insurance programs (to the degree economically feasible) or private plans. This promises to help expand the patient base — and while intervention from health plans may prove increasingly onerous, at least it will be nice to have a job.

I, for one, agree with Sen. Sasse that our country will adapt and successfully emerge from the current economic cycle. What’s more, I believe there’s an excellent probability the dental profession will successfully weather the storm of changes spawned by the information technology economy. 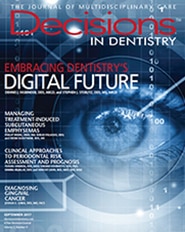