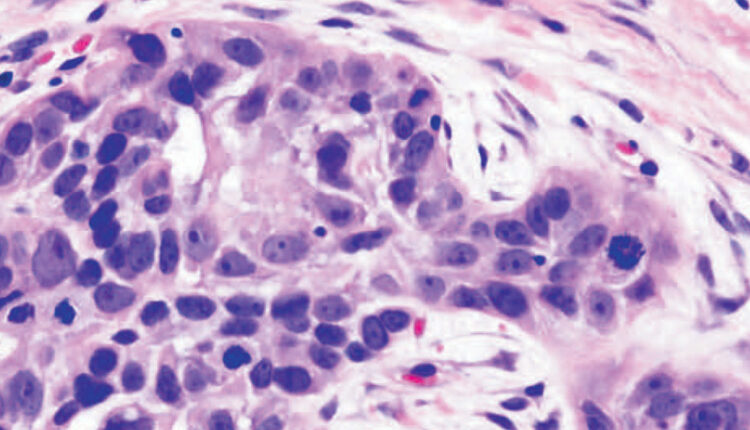 Not all innocuous-looking oral mucosal lesions are benign and a histopathological exam is the best tool for establishing a definitive diagnosis.

By Shravan Renapurkar, BDS, DMD, Sarah Glass, DDS and Dean M. DeLuke, DDS, MBA On Jun 27, 2019
0
Share
Not all innocuous-looking oral mucosal lesions are benign and a histopathological exam is the best tool for establishing a definitive diagnosis
PURCHASE COURSE
This course was published in the June 2019 issue and expires June 2022. The authors have no commercial conflicts of interest to disclose. This 2 credit hour self-study activity is electronically mediated.

Oral mucosal lesions have varying presentations and their diagnoses can range from benign hyperkeratosis to malignancies, such as squamous cell carcinoma. In large-scale studies, it was found that 27.9% of the population age 17 or older and 10.3% of individuals between ages 2 and 17 have some type of oral mucosal lesion.1,2 In another study reviewing more than 50,000 biopsies over 13 years, there was a 1.97% incidence of malignancies and a 3.45% incidence of premalignant lesions.3 Approximately 51,540 new cases of oral cavity and pharyngeal cancers are estimated to occur in the United States annually, and an estimated 10,030 people died of this disease in 2018.4

Oral squamous cell carcinoma (OSCC) is the most common form of cancer in the oral cavity (Figure 1), and it is also the most common cancer of the head and neck region.5,6 The most important factor that influences the prognosis in head and neck malignancies is the stage of disease at presentation, with early stage cancers having higher 5-year survival rate.7 Older age, male gender, and tobacco and/or alcohol use are associated risk factors for OSCC.8 Human papillomavirus (HPV) infection has been identified as having a causal association with oropharyngeal squamous cell carcinoma, with HPV-16 and HPV-18 subtypes deemed to pose high risk.9 Table 1 presents a short summary of some OSCC risk factors, along with their associated potentially malignant disorders.

Primary management of oral cavity cancer is surgical, with multimodality treatment — including radiation therapy, with or without chemotherapy — reserved for advanced stages of disease. Because progression and management of oral mucosal lesions vary drastically based on the diagnosis, a biopsy should be performed when an unknown lesion is persistent or a potentially malignant lesion is suspected. While not all premalignant lesions or malignancies present in these areas, the lateral border of the tongue and floor of the mouth are considered areas of high risk for oral cancer.

Oral health professionals should be aware of the morbidity and mortality related to management of malignant lesions. Delay in diagnosis is a primary factor contributing to poor outcomes in OSCCs, and this underscores the importance of prompt diagnosis of any suspicious lesion. The following case report illustrates the need for an appropriate level of suspicion, coupled with timely biopsy, diagnosis and management of a seemingly innocuous lesion that proved to be squamous cell carcinoma.

A 74-year-old male presented to the Oral Medicine Clinic at Virginia Commonwealth University after referral from his dentist for evaluation of a persistent and symptomatic buccal and palatal gingival lesion. The buccal aspect of the lesion was clinically diagnosed as leukoplakia, while the palatal aspect was thought to be more consistent with an inflammatory lesion. The patient was prescribed a topical steroid for the symptomatic palatal lesion. After two weeks without resolution of the lesion, the patient was referred to the Oral and Maxillofacial Surgery (OMFS) Department for a biopsy.

On presentation to the OMFS clinic, the patient reported that the lesion was reduced in size, but was still symptomatic in response to spicy foods. An extraoral exam showed no cervical lymphadenopathy. The intraoral exam showed a white lesion around the buccal marginal gingiva, extending from the distal of tooth #3 to the interdental papilla between teeth #3 and #4. The palatal surface of the gingiva exhibited a red lesion in the same distribution as the buccal lesion, but extending beyond the marginal gingiva onto the palatal mucosa. The interdental papillae were also involved (Figures 2A and 2B).

A biopsy was performed under local anesthesia, with two separate mucosal specimens taken from the buccal and palatal areas. The biopsy of the buccal gingiva showed a superficially invasive squamous cell carcinoma, and biopsy of the palatal gingiva demonstrated a moderately well differentiated squamous cell carcinoma (Figures 3A and 3B). The patient was informed of the biopsy reports and promptly referred to an otolaryngology team for further evaluation and management of the OSCC. Bone and cervical lymph nodes were uninvolved in the neoplastic process. The patient was treated with partial maxillectomy and extraction of involved teeth, followed by closure utilizing local advancement flaps. Once determined to be cancer free, he will be assessed for oral rehabilitation via bone grafting and osseointegrated implants.

In comparison to other areas, the gingiva is a somewhat uncommon site for squamous cell carcinoma in the oral cavity, with an incidence ranging from 10% to 30%.10 Due to the location and common presentation of inflammatory lesions in this site, squamous cell carcinomas of the gingiva may not initially be suspected as malignant disease. It may mimic periodontal disease, nonspecific granulation tissue or reactive hyperplasia due to tooth-related pathology. If a gingival lesion persists after removal of the suspected cause, a biopsy should be performed to rule out or diagnose malignancy. Gingival squamous cell cancers may occur in nonsmokers, and are often seen in females.

Detection of abnormal oral mucosal changes begins with a thorough clinical examination, but the accuracy of the clinical impression is unreliable.11 A histopathological exam via biopsy is the gold standard for definitive diagnosis; hence, any abnormal tissue removed from a patient should be submitted for histopathological examination, irrespective of the clinical impression. The dysplastic lesion or early oral cancer can present as a leukoplakia, erythroplakia, mixed white-red lesion, ulceration or as a mass.11 A recent study involving 1003 oral lesions found exact concordance between clinical and histologic diagnosis in only 61% of cases overall.12 Clinical exam was found to be accurate in identifying benign conditions in 95.9% of lesions, whereas it was only accurate in 66.7% of premalignant and malignant lesions.11,12

In light of these findings, establishing a definitive diagnosis is only reliably accomplished after biopsy and histopathologic examination. Although an initial clinical exam may be unreliable in diagnosing premalignant lesions and OSCC, it is nonetheless an essential tool to recognize the need for a biopsy. Clinical guidelines for biopsy of oral lesions are summarized in Table 2. 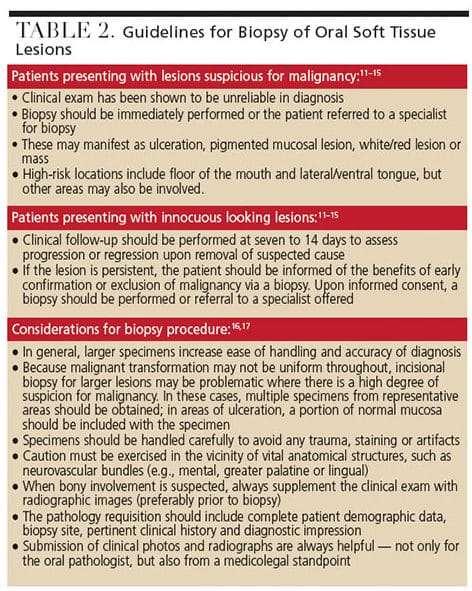 As noted, oral mucosal lesions have varying presentations and innocuous-appearing lesions can sometimes mislead even the most experienced clinicians. Malignancies and premalignant lesions are best managed if detected early. Monitoring lesions long-term is an option that should only be considered if incisional biopsy proves to be benign, and such lesions should be considered for rebiopsy if the lesion exhibits changes in appearance or size.11 The practitioner must also consider sampling error, which is an inherent problem with incisional biopsy. Therefore, when in doubt, additional incisional specimens or excisional biopsy should be considered. Finally, if there is any discrepancy between the clinical impression and pathology report, a repeat biopsy may be indicated.

Due to the prevalence of oral mucosal lesions and OSCC, clinicians should vigilant during any oral examination. Early identification and diagnosis are the clinical goals, as treatment at an early stage is key to reducing morbidity and mortality from squamous cell carcinoma.

Sarah Glass, DDS, is an assistant professor in the Department of Oral Diagnostic Sciences at Virginia Commonwealth University School of Dentistry in Richmond. A board-certified oral and maxillofacial pathologist, she can be reached at [email protected]

Dean M. DeLuke, DDS, MBA, is a professor and director of undergraduate oral and maxillofacial surgery at Virginia Commonwealth University School of Dentistry, where he has received multiple teaching awards. An author and lecturer, DeLuke is a diplomate of the American Board of Oral and Maxillofacial Surgery and a fellow of the American College of Dentists and International College of Dentists. He can be reached at [email protected]

Review of the Efficacy of Immediate Implants 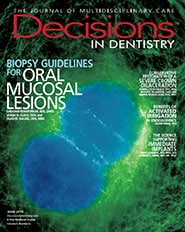