Should outreach efforts and funding for children’s oral health be expanded?

Should outreach efforts and funding for children’s oral health be expanded? A recent study in the Journal of the American Dental Association sheds light on the possible return on investment of emphasizing oral health for kids and teens.1 Using data from the National Health and Nutrition Examination Survey, researchers looked at the incidence of caries in U.S. children by economic group from 1999 through 2004, and compared it with data from 2011 through 2014. Although the authors were not specifically looking at causation, the latter time period roughly correlates with the expansion of dental coverage through the Children’s Health Insurance Program in 2009, and the Affordable Care Act in 2010. 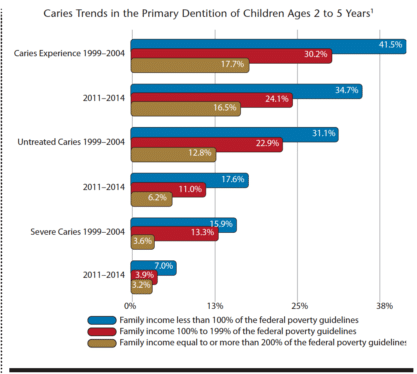 Among children ages 2 to 5, the researchers found a dramatic decline in the incidence of caries. The rate of untreated caries was cut in half in every economic group examined, and the rate of severe caries in poor and low-income kids fell by more than half. The rate stayed roughly the same for more affluent children, but this may be because the rate was already low.

Unfortunately, these benefits were not sustained as children grew older. While the study found there were fewer caries in children ages 6 to 8, it was a more moderate decline than for the preschoolers. And for teens, there was almost no change.

An important question is why the effect was so significant in young children, but not in older kids. Is it easier to influence preschoolers because at that age their parents/caregivers control diet and oral health habits? In 2001, the American Academy of Pediatric Dentistry began to promote the concept of pediatric dental homes and encouraged parents to begin dental visits earlier in the child’s life. This, along with more government funding for pediatric dental care, could be why caries rates dropped sharply in preschoolers, but stayed about the same in teens — who have more control over their diets and oral care habits.

As dentists well know, healthy diets and effective self-care between dental visits have a huge impact in reducing caries. Considering that older children were also subject to increases in government funding for oral health care, could it be that funding without a corresponding push to educate and change behavior may not be enough to reduce caries incidence in a given population? 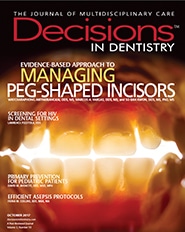