The Etiology of Implant Failure

Ten years ago, if someone asked why dental implants fail, the most frequent answer would have been bacteria.

Ten years ago, if someone asked why dental implants fail, the most frequent answer would have been bacteria. This notion was based on the concept of an inflammatory response to the microbes around implants that is responsible for inflammation of soft tissues and subsequent destruction of bone around these devices. At the time, the literature and clinical experience would also have suggested that when heavy occlusal forces are applied to these devices over a long period, it could result in mechanical failure. This usually manifested in failure of the prosthetic elements.

Within the last few years, other theories have been proposed. Most deal with the role of foreign materials and their influence on peri-implant tissues. One theory suggests that implants will be seen as foreign bodies, leading to rejection of the devices. Another idea is that the presence of foreign material (chiefly, cement and titanium) in the surrounding tissues may create an inflammatory response, thus triggering soft and hard tissue destruction.

Studies have shown that cement found on implant surfaces and in surrounding soft tissues is related to peri-implant disease. In one study, inflammatory cells routinely surrounded cement particles seen via a scanning electron microscope. Excess cement deposition may occur at the time of placement, or during attempts to remove these materials. It is of interest that the same cements used for fixed prosthetics on teeth infrequently elicit an inflammatory response. This may be because there is no periodontal ligament around an implant, it might stem from the absence of a connective tissue attachment, or it may be due to reasons as yet unknown. Whatever the reason, avoiding leaving cement below the gingival tissue seems prudent. This requires due diligence on the therapist’s part. An additional concern is blind cleaning of excess cement with sonic and ultrasonic devices, which can deposit debris into surrounding tissues.

The concept of corrosion and its possible effect on implant failure has been studied for years. In this context, corrosion is the loss of the implant’s fragile titanium oxide (TiO) layer that allows bone-to-implant contact. Several forces — including bacteria, acids, fluoride and other agents — can cause loss of the TiO layer, resulting in particles and ions of titanium being released into the soft tissues.

The literature indicates that cement deposits and corrosion are associated with inflammation of the soft tissue and bone destruction. So, while questions may linger about the etiology of implant failure, science knows a great deal about what makes them work. Proper patient selection, along with appropriate placement of the implant and subsequent prosthesis, are vital to successful outcomes. At the same time, patients must understand the key roles of good oral hygiene and routine maintenance. This is especially true for patients with a history of periodontal disease, who smoke, and those with diabetes. In general, if clinicians treat implant patients the same as individuals with periodontal disease, most implants will fare well. 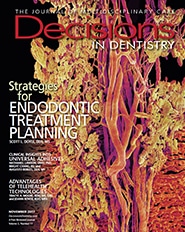