As the body’s systems and organs are tightly connected, the impact of oral health on systemic health is biologically obvious and supported by emerging evidence. 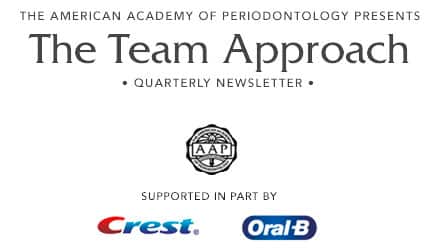 As the body’s systems and organs are tightly connected, the impact of oral health on systemic health is biologically obvious and supported by emerging evidence.1 However, the effect of oral inflammation and the exposure time required to trigger a measurable medical incident may vary significantly among individuals. The main challenges to conducting interventional clinical trials and establishing the causative perio-systemic link are the difficulty in reaching an “end-point” treatment outcome in patients with severe periodontitis and the long-term follow-up time needed to capture a resolving medical incident.2 Additionally, each clinical study has its own limitations and positive incremental relief of the systemic inflammatory burden has yet to be defined and is challenging to measure. Future studies must continue to investigate the targeted strategic link applicable to susceptible hosts with personalized precision medicine. However, from a clinical perspective, our passion and obligation as a “doctor” to care for patients’ health and general well-being should not be discounted. Another, more important question is how can we contribute to optimal total patient care? How can we move forward collectively as oral healthcare providers to advance our interprofessional patient care with our medical colleagues? Following are some recent updates about the periodontal-systemic link and potential mechanisms for its causative and bidirectional relationship.

What Are the Established Links?

Periodontal disease is the sixth most common human illness,3 but the severity and rate of disease progression varies significantly among individuals. This is why the revised American Academy of Periodontology’s classification system for periodontal disease incorporated a new dimension of grading to stratify the risk of disease progression. While mild periodontitis affects half of adults, severe periodontitis impacts about 11% of the global population. Periodontal disease has also been associated with many of the chronic diseases related to aging and premature mortality.4 According to the National Center for Health Statistics at the United States Centers for Disease Control and Prevention, the seven leading causes of death in 2010 were heart disease, cancer, chronic lower respiratory disease, stroke/cerebrovascular diseases, unintentional accidental injuries, Alzheimer’s disease, and diabetes.5 All of these except one are chronic inflammatory diseases associated with periodontitis.

In 2012, experts from the American Academy of Periodontology and the European Federation of Periodontology conducted consensus reports that focused on the three most associated diseases: cardiovascular disease, diabetes mellitus, and premature birth.6-8 Later, systemic reviews, meta-analyses, and additional studies further established the association between periodontitis and these three diseases.9-11 This field of research has expanded to 57 diseases over the years, and more than one-third of registered clinical trials were conducted to investigate the association between periodontitis and systemic diseases.12

Maternal periodontitis is associated with an increased risk of adverse pregnancy outcomes, which not only includes pre-term birth but also low birthweight, still-birth and miscarriage.17 This link does exhibit heterogeneity of results, and another limitation to the research is the fact that the diagnostic criteria of periodontitis with attachment loss does not correspond well to the level of oral inflammation in this population. Severe gingivitis in pregnant women is very common and could be challenging to treat and maintain.

Last but not least, other emerging associated diseases include, rheumatoid arthritis,18-19 osteoporosis,20 certain kinds of cancer,21,22 pneumonia,23 chronic obstructive pulmonary disease,24 Alzheimer’s disease,25 and stroke.26 Many of the links are still under investigation but several convincing mechanisms have been proposed. 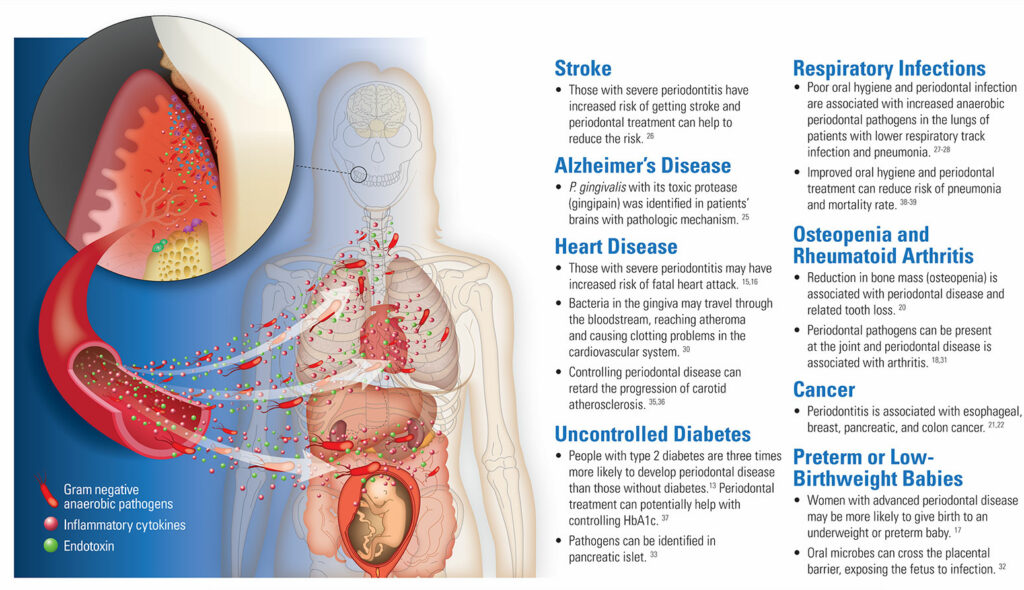 Approximately 500 known species of bacteria reside in the oral cavity. The gingival sulcus is the first barrier to bacteria, and it serves as the frontline battlefield for the fight between microbes and immune cells. There are several potential mechanisms why a local infection and inflammatory lesion may impact the whole body. The oral cavity is indeed an entry point for many bacteria: either through the esophagus, airway or blood vessels. Poor oral hygiene and periodontal infection are associated with increased obligate anaerobes, such as Porphyromonas. gingivalis, Fusobacterium nucleatum, and Prevotella intermedia, in the lungs of patients with lower respiratory track infection and pneumonia.27-28 It is typically assumed that most bacteria cannot survive gastric acid. However, in an animal model, oral application of P. gingivalis alone can cause changes in the gut microbiota and lead to systemic inflammation indirectly through endotoxaemia.29

What’s more striking is the fact that the DNA of specific oral pathogens can be identified in the human brain,25 atherosclerotic tissue,30 joint,31 uterus,32 and pancreatic islet.33 The only explanation is that the bacteria are traveling through the bloodstream and a dead bacterium can also elicit serious immune response and generate auto-reactive antibodies. The endotoxin released locally from the pathogen may also cause low-grade systemic inflammation and distant tissue damage. Additionally, at the frontline of the battlefield against bacteria, millions of immune cells produce significant pro-inflammatory cytokines and matrix proteinase that not only cause local collateral tissue damage but also impact the whole body. Inflammation in the circulation will induce acute-phase response in liver to release C-reactive protein, which is a biomarker for such systemic impact. 34

As part of the larger healthcare system designed to promote patients’ overall health, dentists should make proper medical referrals and communicate closely with primary care physicians. We need to educate the public about the importance of oral health and how it impacts their systemic health. Improving overall health will also support the ability of patients’ immune systems to fight against oral infections and inflammation.

Longitudinal human studies have demonstrated that treatment of periodontal disease can reduce systematic inflammation, improve endothelial function, inhibit the progression of carotid atherosclerosis35,36 and reduce the incidence of stroke.26 Improved periodontal health can positively impact glycemic control in patients with diabetes—reducing HbA1c ranging from 0.2% to 1.03%, which is clinically significant and equivalent to the effect of certain medications.37 Additionally, improved oral hygiene and periodontal health can reduce the risk of pneumonia38 as well as the mortality rate from aspiration pneumonia.39 There are many more emerging health benefits of good oral health that need to quantified with high-quality studies and then we need to refine our precision periodontal medicine to maximize the impact.

Periodontal health is tightly connected with systemic health. Oral infection and inflammation can cause significant impact on overall health through three main pathways: bacteremia, disseminated endotoxin, and systemic inflammatory cytokines. We must support patients’ immune systems so they can fight against this silent inflammatory burden before it is too late. Interprofessional patient care to promote health is warranted in our healthcare system. 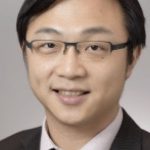 Jeff C.W. Wang, DDS, DMSc, is a clinical assistant professor and director of predoctoral periodontics at the University of Michigan School of Dentistry in Ann Arbor. A board-certified periodontist, he maintains an active faculty practice limited to periodontics and implant surgeries. Wang has authored more than 50 peer-reviewed publications and book chapters.

Talking to Your Patients About Whole Body Health 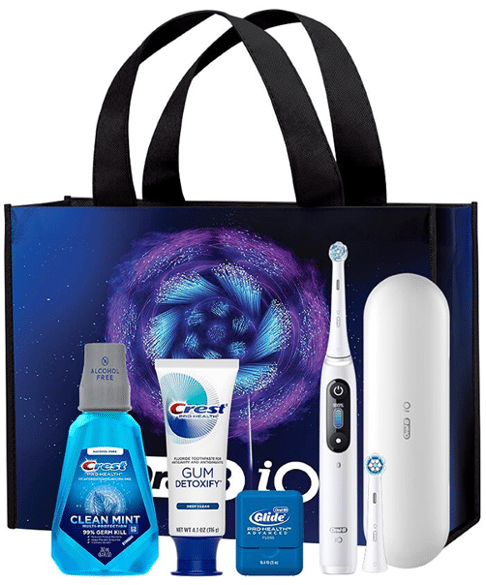 Crest® + Oral-B® are two leading brands in oral care that are united under the umbrella of P&G Oral Health. Recently, we released our newest innovation in power brush technology- the Oral-B iO. The new Oral-B iO™ combines Oral-B’s iconic round brush head with the gentle energy of micro-vibrations for a sensatiOnal clean patients can’t resist. Using Crest Gum Detoxify along with the Oral-B iO can help to virtually eliminate gingivitis by treating the plaque brushing leaves behind. Please click here to learn about the iO trial offer available for dental professionals.
American Academy of Periodontology


Dental professionals from around the globe came together for the AAP’s first ever Virtual Annual Meeting. Over 2,400 attendees enjoyed more than 35 hours of compelling, world-class periodontal continuing education.

Not able to attend the this year’s AAP Annual Meeting? It is not too late! All content, including continuing education courses, exhibitor information, and Corporate Forums will be available online through Nov. 6, 2021. Earn 35 continuing education hours and access the complete meeting at your time, on your pace. Registration is open through Jan. 30, 2021.