The relationship between oral and systemic health is not a new concept; rather, it is a dynamic concept that is continually reassessed. 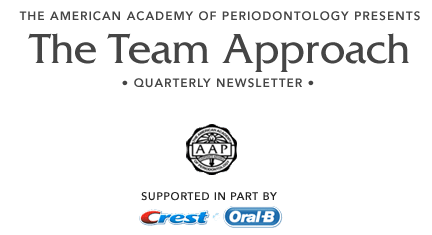 The relationship between oral and systemic health is not a new concept; rather, it is a dynamic concept that is continually reassessed. Acceptance of the oral-systemic link by the mainstream medical and dental communities has had its ups and downs through the years, not only due to questions of its scientific validity, but also because of the difficulty in finding indisputable evidence to substantiate such an association.

This review explores the plausible biological mechanistic links between periodontal diseases and four common systemic diseases/conditions: cardiovascular disease, diabetes, respiratory diseases, and adverse pregnancy outcomes—all of which are associated with morbidity, mortality, and economic burden. The association between periodontal diseases and other systemic diseases/conditions, such as cancer, osteoporosis, metabolic syndrome, neurodegenerative diseases, and autoimmune diseases is also applicable; however, the evidence is still preliminary, and further research is warranted to better demonstrate an association. 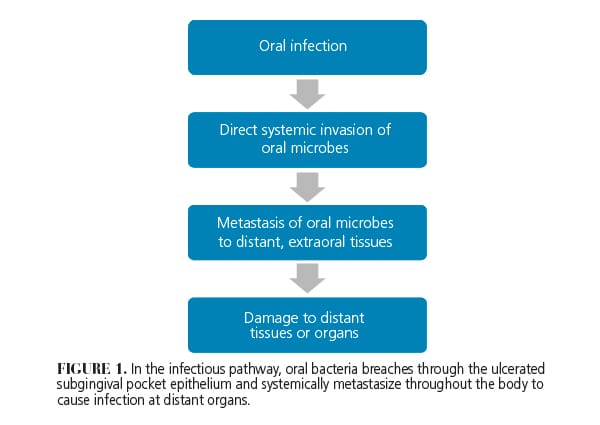 Van Dyke and van Winklehoff1 proposed two simultaneously occurring and interrelated biologically plausible mechanisms to explain the link between periodontal diseases and systemic diseases: the infectious pathway and the inflammatory pathway. The infectious pathway postulates that the direct invasion of oral microbes through the ulcerated and inflamed subgingival pocket epithelium subsequently leads to transient bacteremia. From there, the oral microbes systemically metastasize and infect nonoral sites (Figure 1).

In contrast, the inflammatory pathway is highlighted by the spread of inflammatory mediators—not the bacteria or their byproducts—beyond the periodontium (Figure 2). These mediators subsequently induce and/or intensify the systemic inflammation, which then contributes to systemic diseases in susceptible individuals. These two fundamental pathways are the basis to understanding the pathophysiologic mechanisms that govern the link between periodontal disease and certain systemic diseases. 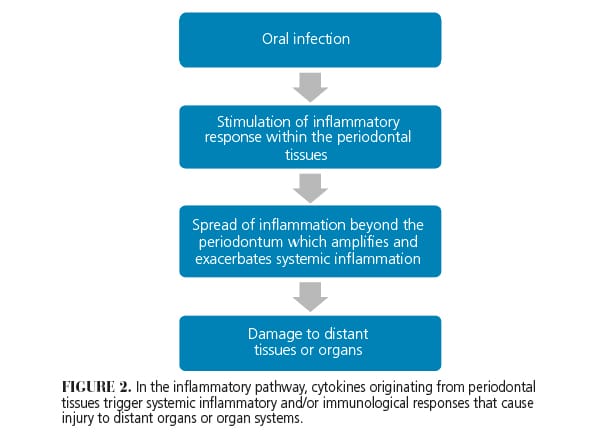 The link between periodontal diseases and cardiovascular disease can be explained by both the infectious and the inflammatory pathways. In the infectious pathway, periodontopathic pathogens breach through the inflamed and ulcerated pocket epithelium, travel directly to the endothelial walls of blood vessels, and disrupt the integrity and the function of endothelial cells. This triggers several events simultaneously. First, platelets are activated, which initiates a cascade of events that leads to the formation of a thrombus at the site of injury. Second, leukocytes recruited to the site of injury release pro-inflammatory cytokines, reactive oxygen species, and tissue-degrading proteinases. A prolonged and sustained release of inflammatory mediators at the site of injury subsequently amplifies the inflammatory response and further exacerbates vascular pathology. Several studies support the direct infectious nature of oral microbes as playing a direct role in periodontal diseases and atherosclerosis. Pollreisz et al4 found that invasive Porphyromonas gingivalis induce monocyte migration, which leads to elevated production of the pro-inflammatory mediators, IL-6, and TNF-α. Furthermore, in a study of atherosclerotic plaque and carotid endarterectomy samples from patients with atherosclerosis, Ford et al5 found that P. gingivalis was present in 100% of the samples while 84% of samples tested positive for Fusobacterium nucleatum and 48% of samples tested positive for Tannerella forsythia. In a different study, Bullon et al6 obtained blood samples from a group of 38 patients with periodontitis, and found that the lipopolysaccharide of P. gingivalis directly induced damage to the mitochondria of host fibroblasts, which led to an excessive production of reactive oxygen species by damaged fibroblasts. Overproduction of reactive oxygen species leads to oxidative stress, which is one of the many pathophysiological mechanisms of cardiovascular disease. Taking all these studies together, it seems biologically likely that invasive oral microbes have pro‐atherogenic effects, which can serve as the basis of the infectious pathway between periodontal diseases and atherosclerosis.

Currently, there is little evidence that invasive oral microbes influence glycemic control. In fact, evidence suggests that diabetes does not change the oral microbiota.10 Instead, a chronic dysregulated immune system and an imbalance of cytokines—characterized by increased production of pro-inflammatory mediators—is central to the pathogenesis of diabetes and its associated complications.11 In patients with poorly controlled diabetes, the resulting systemic inflammation is mediated by the elevated production of advanced glycation end products (AGE), which are protein molecules that undergo an irreversible, nonenzymatic glycation reaction. This reactive process, in turn, alters the structure and the function of the affected protein molecules. Increased accumulation of glycated proteins in the tissue disturbs normal tissue remodeling and interferes with normal wound healing. Moreover, AGE can bind to surface receptors, known as receptors for advanced glycation end products (RAGE), found on macrophages and other immune cells. When this interaction occurs, a potent inflammatory cascade is triggered that further amplifies tissue destruction, exacerbates the inflammatory response, blocks normal tissue repair, and limits self-resolution of inflammation.

When periodontitis co-exists with diabetes, periodontopathic bacteria trigger the host immune cells to release elevated levels of pro-inflammatory mediators IL-1, IL-6, and TNF-α. The release of pro-inflammatory mediators not only initiates and sustains an intense and exaggerated systemic inflammatory response, but also downregulates insulin receptors at the end-target organ level, thereby leading to increased insulin resistance, reduced uptake of glucose into the cell, and a disruption in glycemic control. At the same time, the excessive formation and accumulation of AGE, as a result of irreversible glycation of proteins such as collagen, results in diabetic complications, interferes with collagen remodeling, impairs proper wound healing, and amplifies neutrophil response to periodontal pathogens. The inflammatory pathways are thus further intensified, and the expression of tissue-degrading enzymes, such as metalloproteinases, is promoted. As such, the combined pathologic interactions of diabetes and periodontitis are akin to an unrelenting vicious cycle that incites and intensifies the inflammatory process, drastically disrupting the immune response and inevitably leading to the combined tissue-destructive effects of both diseases (Figure 3) 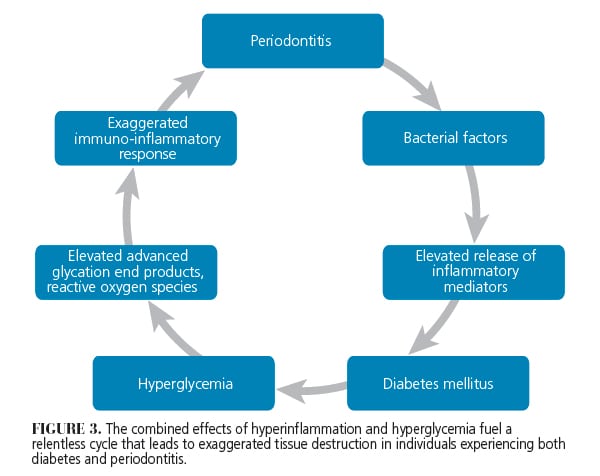 Despite a plausible link between the two, there is dueling evidence regarding the effectiveness of periodontal intervention in glycemic control. In a randomized controlled clinical trial involving 60 subjects with diabetes and periodontitis, Koromantzos et al12 found that the subjects who received periodontal intervention at baseline (test group) exhibited statistically significant reductions in HbA1c levels compared with subjects who did not receive treatment at baseline (control group) at the end of the 6-month trial. In contrast, in a multi-centered, randomized clinical trial evaluating 514 subjects with diabetes and periodontitis, Engebretson et al13 found no statistically significant differences in changes of the HbA1c levels between the test group (periodontal treatment group) and the control group (non-treatment group) at 6-month follow-up. These findings are consistent with another randomized controlled clinical trial that did not show a significant decrease in HbA1c levels between the test (periodontal treatment group) and the control groups (non-treatment group) at a 3-month follow-up.14 The differing conclusions indicate that the existing evidence is still insufficient to either support or refute whether periodontal therapy can effectively improve glycemic control, and underscore the need for additional research. Nevertheless, numerous investigations agree that periodontal intervention leads to improvements in several critical periodontal parameters, such as bleeding on probing, pocket depths, clinical attachment levels, and gingival index (Figure 4).

The oral cavity may be a source of respiratory diseases, such as chronic obstructive pulmonary disease (COPD) or aspiration pneumonia in those with compromised immune systems. Among individuals with compromised immune systems, impaired protective cough reflexes, or those requiring mechanical ventilation, the risk of aspirating oral bacteria and developing respiratory diseases is elevated.

In an attempt to link periodontal diseases with respiratory disease, Scannapieco15 outlined four biologically plausible mechanisms. One is consistent with the infectious pathway: aspiration of bacteria either commensal to the oral cavity—such as P. gingivalis and Aggregatibacter actinomycetemcomitans—or respiratory pathogens that colonize the oral tissues—such as Streptococcus pneumoniae and Haemophilus influenza—directly leads to respiratory infection. The second mechanism is consistent with the inflammatory pathway: cytokines from periodontal tissues damage respiratory epithelium and promote infection. The third and the fourth mechanisms focus on the microbially derived enzymes that degrade the actions of the protective salivary pellicle either on the mucosal surface, which blocks the clearance of pathogenic bacteria from the mucosal surface, or on the pathogens themselves, which facilitates the adhesion of pathogenic bacterial to the mucosal surface. While it is difficult to speculate which of these mechanisms mediate the link between periodontal diseases and respiratory disorders, it is possible that either a single mechanism or a combination of several mechanisms plays a role in this association.

Periodontal intervention may be effective in reducing the risk of respiratory diseases, such as pneumonia, among high-risk individuals (especially those living in assisted-living homes or intensive care units). In a systematic review investigating the effectiveness of periodontal intervention in reducing the risk of pneumonia and COPD in high-risk populations, Scannapieco et al16 found that dental treatment and a oral hygiene regimen focused on better plaque control were associated with a 40% reduction in the incidence of nosocomial pneumonia. In another systematic review, the investigators found good evidence that oral hygiene and frequent professional intervention reduced the risk of experiencing respiratory diseases among high-risk populations.17

Both the infectious pathway and/or the inflammatory pathway may explain the link. On the one hand, P.gingivalis and A. actinomycetemcomitans have been detected in the amniotic fluid of pregnant women with periodontitis.19 Additionally, F. nucleatum has been frequently found in the amniotic fluid of premature births with intact membranes.20,21 Hence, it is conceivable that systemic exposure to the periodontal microbiota may be sufficient to trigger an adverse pregnancy outcome. On the other hand, as it relates to the inflammatory pathway, maternal exposure to periodontal infection induces an inflammatory response in the periodontal tissue, which systemically disseminates and stimulates the production and release of pro-inflammatory mediators, such as IL‐1, IL‐6, TNF‐α, prostaglandins, and PGE2, in systemic circulation. Higher cytokine levels have been detected in mothers who deliver preterm.22 Consequently, higher cytokine levels may initiate premature uterine contractions, which ultimately leads to preterm labor.23

The available evidence points to biologically plausible links between periodontal diseases and cardiovascular disease, diabetes, respiratory diseases, and adverse pregnancy outcomes. Furthermore, current data corroborate that periodontal intervention may lead to positive outcomes in achieving improved oral health and in reducing the risks associated with systemic conditions. Yet, in spite of establishing probable links between periodontal diseases and these systemic diseases, there is still a need for further long‐term interventional studies. Ideally, future studies should implement more standardized methodologies that permit a better understanding of whether the stated benefits of periodontal treatment translate into a reduction in incidence of these systemic events.

The authors would like to thank Shadie Azar, DMD, of the Department of Periodontology at the Indiana University School of Dentistry in Indianapolis, for his invaluable assistance in acquiring clinical photographs. The authors also appreciate his thoughtful and insightful suggestions, which improved the clarity and presentation of this manuscript.

Stephanie Bowers, BS, is a fourth-year dental student at IUSD. Originally from Flint, Michigan, she has strong interests in clinical periodontology and academia. Bowers is a past president of the IUSD Student Professionalism and Ethics Association and a member of the periodontal study club. This summer, she will begin a residency in periodontics at Texas A&M College of Dentistry in Dallas.

CDC Reports More than 15% of US Adults Are Physically Inactive