A study from the University of Sheffield in England examined the impact of a guideline change in prescribing antibiotic prophylaxis (AP) to prevent infective endocarditis in patients prior to undergoing invasive dental procedures.

A study from the University of Sheffield in England examined the impact of a guideline change in prescribing antibiotic prophylaxis (AP) to prevent infective endocarditis in patients prior to undergoing invasive dental procedures. This research is reportedly the largest and most comprehensive since the American Heart Association (AHA) released its 2007 recommendations that AP should be given to patients at high risk of developing infective endocarditis, but not to those at moderate risk. Findings from the study, “Antibiotic Prophylaxis and Incidence of Endocarditis Before and After the 2007 AHA Recommendations,” were published in the Journal of the American College of Cardiology.

The results led the team to declare the United Kingdom’s National Institute of Health and Care Excellence was wrong to call for a complete ban on the use of AP before invasive dental treatment. Researchers found large drops in AP prescribing for those at moderate risk of infective endocarditis (64%), and a 20% fall in AP prescribing for patients at high risk — despite the AHA’s recommendation that those at high risk should continue to receive AP. The team also identified a significant increase (177%) in infective endocarditis in those at high risk, but a barely significant increase in patients at moderate risk. 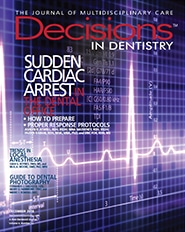