Oral Health Effects of Cannabis Use

A recent paper in this journal by Portillo et al explored oral health care for individuals who use cannabis.

A recent paper in this journal by Portillo et al1 explored oral health care for individuals who use cannabis. The article noted that 30 states allow either medical and/or recreational use of the drug. It has been found that chronic marijuana smokers have worse oral health than the general population, with higher rates of decayed, missing and filled teeth, higher plaque scores and more gingivitis. Side effects of using the drug can include xerostomia and, for users who smoke it, increased risk for oral cancer. It has been estimated that 7000 Americans begin using this drug each day.2

Several studies have investigated the effects of smoking marijuana on periodontal tissues. A landmark study in New Zealand by Thompson et al3 measured periodontal attachment levels in 903 individuals who had been followed from birth in another study. Their periodontal health was measured at ages 26, 32 and 36. Attachment loss was positively correlated to lower socio-economic status, age, and those individuals who smoked tobacco or marijuana. In general, the more an individual smoked, the worse the periodontal condition.

Another study by the same group compared disease severity (as measured by attachment loss) in marijuana smokers and nonsmokers between the ages of 26 and 32. One group had never used the drug, while users were divided into occasional smokers and those with high exposure levels. Attachment loss was significantly greater in subjects who were heavy long-term users. Among the findings was that prolonged use of cannabis was not associated with any of the other health care parameters studied beside loss of periodontal support.4

Lopez and Baelum5 studied Chilean high school students who used marijuana and those who did not use the drug. Compared to nonusers, they found no increase in the incidence of necrotizing ulcerative gingivitis or loss of clinical attachment levels in cannabis smokers.

While some researchers — including Lopez and Baelum — have questioned the conclusions in the Thompson articles,3,4 there seems to be growing evidence that smoking marijuana can have a detrimental long-term effect on periodontal tissues. It therefore behooves dental professionals to be alert for patients who may be using cannabis. Even with increased governmental leniency in enforcement efforts, as well as more lax laws concerning its purchase and use, many patients hesitate to reveal they smoke cannabis. Dental teams already advise patients against using tobacco; it now appears cannabis should be part of those discussions, as well.

Bleaching and the Diagnosis of Internal Resorption 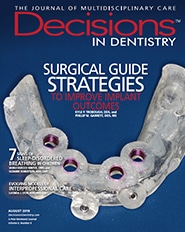