A three-year extension of the Older Americans Act — signed into law on April 19 by President Barack Obama — will fund oral health screenings and related disease prevention efforts for older adults.

A three-year extension of the Older Americans Act — signed into law on April 19 by President Barack Obama — will fund oral health screenings and related disease prevention efforts for older adults. First passed in 1965 as part of President Lyndon B. Johnson’s War on Poverty, the act has been awaiting reauthorization since 2011. The reauthorization will help finance efforts that provide caregiver support, as well as transportation, job training, abuse protection and nutrition programs for seniors, including Meals on Wheels.

The legislation, which raises funding 7% over three years, amends the definition of “disease prevention and health promotion services” to include routine screening of oral health — along with the long-standing screenings for hypertension, glaucoma, cholesterol, cancer, vision, hearing, diabetes, bone density and nutrition.

The Center for Oral Health has hailed the bill as a victory for millions of older Americans, noting seniors receive little or no basic dental care under Medicare. The U.S. Census Bureau projects that the number of Americans older than 59 will grow from about 65 million today to 92 million by 2030.

Rep. Robert C. Scott (D-VA), ranking member of the House Education and Workforce Committee, praised the Older Americans Act’s new commitment to oral care, saying, “We know this will have a demonstrable and positive impact on the health of seniors across the country.”

The National Problem of Opioids and Addiction 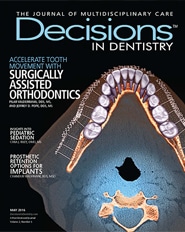