Many treatment options are available to manage what patients colloquially refer to as gummy smile.

By Rania Livada, DDS, MS and Jacob Shiloah, DMD On Oct 1, 2016
0
Share
Many treatment options are available to manage what patients colloquially refer to as gummy smile

PURCHASE COURSE
This course was published in the October 2016 issue and expires 10/31/19. The author has no commercial conflicts of interest to disclose. This 2 credit hour self-study activity is electronically mediated.

Public esthetic awareness is centered on an attractive smile, and excess gingival display is a frequent complaint from patients seeking to improve their appearance. A broad exposure of the gingiva (or gummy smile) is often considered displeasing and distracting.1 In more severe cases, overexposure of the gingiva is also seen in repose of the lips.

A smile is considered unattractive when more than 4 mm of the gingiva is exposed.2 The tendency toward gummy smile appears to have a female predilection. Tjan et al3 reported that approximately 7% of men and 14% of women have excess gingival display in full smile. Similarly, Vig and Brundo4 noted that maxillary anterior tooth display was found almost twice as often in women as in men. A gummy smile could be localized in nature and involve only a few teeth (Figures 1A and 1B), or, more commonly, generalized, affecting the entire cosmetic zone (i.e., maxillary anterior teeth), as seen in Figure 2.

A variety of factors is associated with excess gingival display; as such, reaching a differential diagnosis is critical before recommending treatment options. It may be caused by severe attrition of the clinical crowns, or result from a skeletal deformity caused by an overgrowth of the maxilla in the vertical dimension (vertical maxillary excess). Excess display may also be due to a compensatory extrusion of the maxillary incisors and alveolar bone (dentoalveolar extrusion). Additional causes include a short upper lip or hyperactivity of the orbicularis oris muscle. This appearance may also result from failure to complete the passive eruption phase of the teeth (altered passive eruption), varying degrees of gingival overgrowth, or clinical or anatomic crowns that are too short. In the majority of cases, two or more etiologies may be responsible, and the treatment plan should address all factors.

As noted, gingival overgrowth is a common cause of gummy smile. In these cases, the enlarged gingiva covers the clinical crowns of the teeth in various degrees, creating an unesthetic appearance. The most common cause of gingival enlargement is inflammation due to biofilm, but it may also stem from medications, such as anticonvulsants, immunosuppressants and calcium channel blockers. Biofilm-induced gingival enlargement responds well to a reduction of the bacterial load through meticulous oral hygiene and periodontal scaling and root planing. In cases of drug-induced overgrowth, a medical consultation with the patient’s physician is essential. A substitution of the causative agent with another drug could improve treatment outcomes considerably. In more severe cases, surgical removal of the excess gingival tissue is necessary to restore function and esthetics; this approach will also create an environment conducive to oral hygiene.

Although not as common, gingival overgrowth can be caused by a systemic condition, such as diabetes, leukemia or sarcoidosis. In rare cases, the cause of the enlargement is genetic, such as hereditary gingival fibromatosis disorder.5 Treatment options include nonsurgical therapy, as well as surgical excision of the excess gingival tissue — although recurrence in such cases is unpredictable.

Altered passive eruption (APE) is seen when the free gingival margin is located on the enamel of the apical third of the clinical crown, rather than on (or close to) the cementoenamel junction (CEJ).6 This condition (Figure 3) is attributed to a failure in concluding the physiological passive eruption phase. During this phase, the gingiva migrates apically, with a gradual exposure of the crown of the tooth and final stable localization of the dentogingival junction at the tooth’s cervical level. Although APE is quite common,7 its pathogenesis is not fully understood. A number of factors (developmental or genetic) have been implicated, such as the presence of thick, fibrotic gingiva. This type of gingiva tends to migrate apically more slowly during the passive phase than thin gingival tissue, as in cases of hereditary gingival fibromatosis.5

In addition, APE can distort the appearance of the teeth by making them appear short and squarish, thus amplifying the displeasing smile (Figure 3). A common observation in these cases is the presence of a thick and irregular buccal bony plate, which tends to increase muscle tension and displace the upper lip to a more apical position during the smile, thus increasing gingival display. 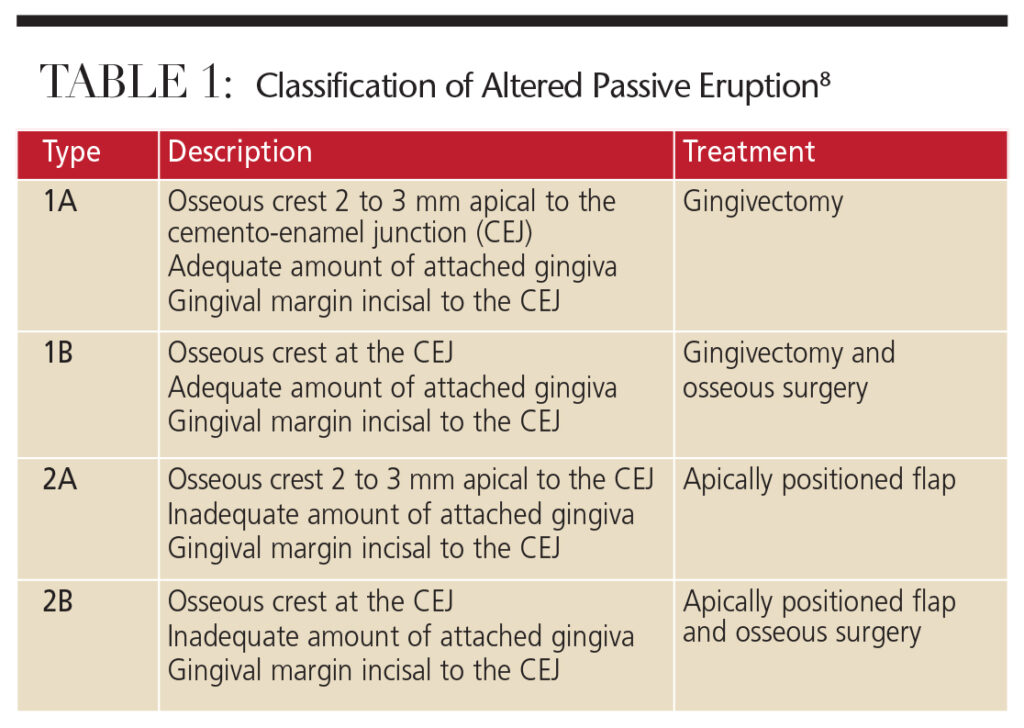 Coslet et al8 classified APE morphologically into two types, according to the location of the mucogingival junction with respect to the alveolar bone crest. They also identified two subtypes in reference to the position of the bone crest with respect to the CEJ (Table 1). This classification serves as a general guideline for treating patients with APE. A surgical intervention aimed at full exposure of the anatomic crown leads to an immediate and dramatic esthetic improvement. A variety of surgical procedures are available for this purpose,1 such as lasers, gingivectomy, flap surgery (with or without ostectomy), or apically positioned flaps. The choice of the most appropriate technique is dictated by the relationship of the gingival margin to the underlying osseous crest, the relationship of osseous crest to the CEJ, and the quantity of attached keratinized gingiva. In cases of buccal exostoses, a modified technique that requires osteoplasty of the buccal aspect of the alveolar bone — leading to a reduction in upper lip tension, and lengthening of the clinical crowns and lip — may provide an overall reduction in gingival display.9

Although it varies between men and women, the average length of a maxillary central incisor is 10 to 11 mm. Short maxillary incisors (<9 mm) are usually due to coronal destruction related to extraoral trauma, caries or incisal wear. Tooth attrition is most often seen in patients with parafunctional habits, such as bruxism and clenching, which can lead to pseudo gummy smile. If the parafunctional habits are controlled with an occlusal guard or biofeedback therapy and no hypererruption has occurred, these cases can be restored esthetically with veneers or crowns.

In an ideal smile (and assuming the maxillary lip is in repose), approximately 3 to 4 mm of the maxillary central incisors should be displayed in women, while it would be approximately 2 mm less in men.4 As a result of aging and elasticity loss, the upper lip tends to increase in length, resulting in decreased visibility of the maxillary incisors and increased exposure of the mandibular antagonists. In a full-smile position, the upper lip should ascend to the gingiva/tooth interface. In a patient with a hyperactive lip, however, the lip ascends farther apically — approximately one-and-a-half to two times farther than normal, exposing excess gingiva and creating an esthetic issue. This condition is caused by hyperfunction of the lip elevator muscles,10 resulting in excess gingival display.

Injection of botulinum toxin Type A has been suggested for managing this problem. Although good esthetic results have been reported, the benefits are short-lived and injections must be repeated every six months.11 For more lasting results, surgical repositioning12 of the maxillary lip is recommended.13 During the surgery, the upper lip is repositioned and sutured in a more coronal position, resulting in shortening of the vestibule. This procedure restricts the muscle pull of the lip elevator muscles, thus reducing gingival display when smiling.

In a repose position, and when measured from the subnasale to the lower border of the lip, the average length of the maxillary lip in young adult men is 22 to 24 mm, while in young women it ranges from 20 to 22 mm.14 If excess gingival display is due to a short lip, restoring esthetics can be challenging. Similar to treating patients with hyperactive lip, plastic surgery may be necessary.

Vertical maxillary excess is a skeletal anomaly of the face resulting from an overgrowth of the maxillary bone, which causes an enlarged vertical dimension of the midface and the appearance of a short lip.15 While the length of the upper lip is usually normal, it may appear short due to the elongated maxillary bone. Garber and Salama16 proposed a classification of vertical maxillary excess according to the degree of gingival exposure and corresponding treatment options (Table 2), which may include a combination of orthodontic and periodontic therapy, as well as orthognathic surgery, to restore normal interjaw relationships and reduce gingival display.17

In more severe cases, orthognathic surgery is usually required to correct the vertical overdevelopment of the maxilla. Due to the morbidity caused by this type of surgery, however, many patients choose not to undergo the procedure. In these cases, periodontal surgery may still help improve esthetic results and provide a reasonable compromise for patients.18

Excess gingival display is an esthetic concern to patients and a common complaint in the dental operatory. It is essential to understand and correctly diagnose the cause or causes of this condition, and provide a comprehensive review of treatment options. A thorough clinical examination is critical to achieving a correct diagnosis and esthetic — and predictable — patient outcomes. 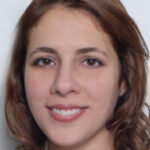 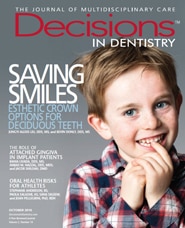