Not long ago, He Jiankui, PhD, an assistant professor at Southern University of Science and Technology in Shenzen, China, made headlines after announcing he had used CRISPR-Cas9 technology for in vivo genetic modification of human embryos.

Not long ago, He Jiankui, PhD, an assistant professor at Southern University of Science and Technology in Shenzen, China, made headlines after announcing he had used CRISPR-Cas9 technology for in vivo genetic modification of human embryos. This genetic engineering reportedly resulted in the birth of healthy twins. His rationale was that the twins’ father had human immunodeficiency virus (HIV), and the scientific goal was to modify a small portion of DNA from a gene called CCR 5 because individuals who are missing this genetic material appear resistant to HIV.

It was announced the genetic transformation worked in one of the two siblings. Yet what long-term effect this modification will have is unknown. As Maria Jasin, PhD, a developmental biologist at Memorial Sloan-Kettering Cancer Center in New York, notes, at the very least, the twins’ family dynamics might be affected because one was successfully treated to remove the gene, while the other still has it.

These patients are apparently not the first to be genetically modified using CRISPR technology. In 2016, American reproductive specialist John Zhang, MD, reported performing genetic modification on a woman from Jordan who had Leigh syndrome, an inherited, rare and severe neurologic disorder. Follow-up on the treatment was not available, except for the fact she had given birth to a son who appeared to be healthy.

Meanwhile, reaction to He’s announcement was mixed. Several leading authorities who attended the conference in Hong Kong where He presented were quick to condemn his actions. Francis S. Collins, MD, PhD, director of the National Institutes of Health, was quoted as saying, “Should such epic scientific misadventures proceed, a technology with enormous promise for prevention and treatment of disease will be overshadowed by justifiable public outrage, fear and disgust.”

As previously discussed in this column, CRISPR technology opens a Pan­dora’s box of genetic, medical and ethical issues. On a daily basis, health professionals see patients who would benefit from genetic modification — however, this technology can easily be misdirected. The positive side is the ability to treat diseases, such as cystic fibrosis, certain cancers and other conditions that affect the patient on a macro level. It is even possible that genetic modifications for individuals predisposed to dental caries and periodontal disease may be in the offing. Unfortunately, genetic engineering does not always hit where it aims, and there have been instances where unintended consequences have occurred.

In the near term, the outlook for this approach in the United States is questionable. In fact, The New York Times reports that in 2014 a provision was put into a congressional budget bill that bars the U.S. Food and Drug Administration from even considering mitochondrial replacement therapy. So researchers went underground. Given the promise of genetic modification for preventing and managing various diseases, it seems clear that science should proceed cautiously and continue the debate over the issues and concerns surrounding genetic engineering. 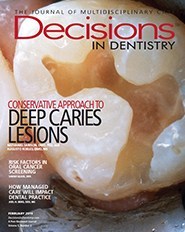